You’ve heard “it takes a village,” but Estero Rotarian Sally Smith has singlehandedly led the charge to transform a village in a mountainous region of rural Guatemala.

Before meeting Smith, the women of Santa Eulalia, Guatemala, had to walk a considerable distance down to the river to fetch drinking water, then carry their jugs back uphill atop their heads — filled with bacteria-laden water. There was no running water in this village of indigenous Maya, and no sanitary latrines. 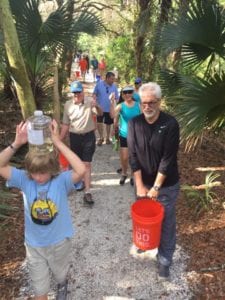 Today, the people of Santa Eulalia enjoy safe water, filtered from the valley below and piped directly to their homes. They held a celebration in June 2018, on the first day clean water arrived to 1,500 homes, marking the joyful occasion with fireworks. Smith, who has passionately and persistently spearheaded efforts to improve living conditions in Santa Eulalia, was guest of honor.

“The love those people express for her, it’s like she’s a saint,” says Laurie Koenecke, a local Rotarian who is preparing for her fourth trip to Guatemala with Smith later this year. “The little children come running up to hug her. These people would do anything for Sally; she has done so much for them.”

Whenever Smith visits Santa Eulalia, she comes with blessings for its people. Over the years, she has collected and delivered 50 wheelchairs and 150 pairs of eyeglasses to those in need. She also organized a dental team and delivered medical supplies.

For her efforts, Smith has been named 2019 Woman of the Year by Zonta Club of Bonita Springs-Estero. She will be the honored guest at Zonta’s annual luncheon on April 16. The organization of philanthropic-minded, professional women annually recognizes a local woman for her leadership in charitable work to improve the lives of women and girls.

Smith, a financial consultant with Merrill Lynch in Bonita Springs, discovered the Mayan village and its overwhelming need about seven years ago while volunteering to teach English to adult learners through Literacy Council Gulf Coast. There, she met Julio Mateo, who has since moved back to Santa Eulalia to become a village leader and help coordinate improvement projects.

When Mateo told Smith about his village of Santa Eulalia, she immediately connected, having previously visited another village in Guatemala with Rotary International.

Image 1 of 6
“I found the people there so genuinely humble and appreciative of anything we could give them, and what little they had, they were happy to share: their food, shelters, and most importantly, their hearts,” recalls Smith.

The Rotary Club of Estero supported her visit to Santa Eulalia to conduct an assessment. The needs were profound.

“The water was found to have a high content of bacteria and fecal E. coli,” she reported. “Waterborne disease was prevalent and causing a high death rate among zero to five year olds. They were losing every third child that was born.”

There were other serious problems as well. Cooking was often done over an open fire inside the simple, dirt-floor homes, leaving soot all over the concrete walls and corrugated metal roofs. Thanks to Smith, 450 families now have vented stoves.

For the children, school was conducted in stables only after sending the animals out for the morning, and education stopped at sixth grade. The village now has an eight-room school, thanks to a partnership with Miracles in Action. Rotary provided furnishings along with scholarships for students to attend school beyond sixth grade in a larger city.

Smith has personally sponsored the education of one young woman from Santa Eulalia, who now attends Florida Gulf Coast University, adds Koenecke, who says Smith is too humble to draw attention to herself.

“She shows the power of what one person can do,” Koenecke asserts.

The Estero Rotary Club has enthusiastically adopted Santa Eulalia, partnering with Water Mission to bring chlorinated water to the village. Phase One was completed last year, at a cost of $165,000, providing a pumping station, filtration system and piping to bring water up the mountain. Smith applied and received a Rotary International grant for 50 percent of the project cost but had to raise the other half herself. Heavily supported by Estero Rotary, Smith also has solicited funds from other Southwest Florida Rotary clubs, and she has organized several fundraisers.

To raise awareness locally, Smith initiated the Walk for Water; the fifth annual event was held this year at Koreshan State Park in March. Participants carried empty buckets along a half-mile path to the Estero River, filled them up, then made the arduous walk back, simulating the efforts of villagers in Guatemala.

“Sally is a very talented and focused individual,” says former Rotary District Governor Cyndi Doragh, noting that Smith also was recognized as Rotarian of the Year in 2017-18. “When her heart was turned on, there was no stopping her.”

Phase Two fundraising is underway and will bring clean water to 500 additional homes in the region. Eventually, Smith would like to harness water from a spring at higher elevation to serve more families. The longterm vision also includes installing water meters to teach the value of conservation, notes Smith.

“Sally is a very dynamic individual,” praises Doragh. “She has really changed the lives of everyone in that village.”

Posted in Featured Articles and tagged Guatemala, Woman of the Year, Zonta