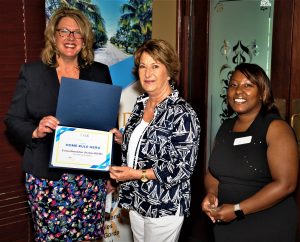 The Florida League of Cities (FLC) recognized District 1 Councilmember Joanne Ribble with a 2021 Home Rule Hero Award for her work and advocacy efforts during the 2021 Legislative Session.

Home Rule is the ability for a city to address local problems with local solutions with minimal state interference. Home Rule Hero Award recipients are local government officials, both elected and non-elected, who consistently responded to the League’s request to reach out to members of the legislature and help give a local perspective on an issue.

Ribble is liaison to the FLC, the united voice for Florida’s municipal governments. She has also been elected to serve as secretary to the southwest chapter of the League.

Posted in People, Snippets of Success