The decorative pillows in the sitting area at the new Towneplace Suites by Marriott invite guests to “sit back and relax” and “stay awhile.” Chances are, if you do, you will hear the tale of two Kansas City gals who moved to Southwest Florida to open a hotel and create a “family” culture which extends to the Estero community.

“This is the fifth hotel I’ve opened,” says the bubbly general manager, Lindsay Chapman, who brings 21 years of experience in hospitality management including time with Marriott, InterContinental Hotels Group (the parent company of Holiday Inn) and Hilton. She’s happy to be back with Marriott and even happier to be back in Southwest Florida, having grown up in Tampa spending many summers with her grandparents on Fort Myers Beach. 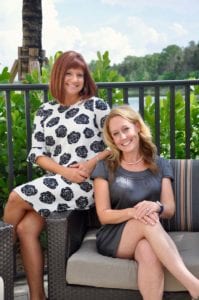 Adding to her joy, Chapman has hired her daughter’s favorite teacher from Kansas City (also Chapman’s matron of honor for her upcoming wedding) to serve as Towneplace Suites sales manager. It’s a big change from the classroom for Meagan Pierce, and she admits she brings little experience but lots of enthusiasm to the job. At school, Pierce was a master organizer of events and programs and was apt at “selling” her zany ideas to better the school community, adds Chapman.

The serendipitous story of how Pierce came to relocate with Chapman starts with a secret: the beloved teacher hadn’t told anyone that her husband, Tony, was taking a job as creative services director with FOX 4 in Fort Myers. She could hardly believe it when Chapman announced she would be withdrawing her daughter because she was moving to Florida to open a new hotel. Pierce immediately shared her own relocation plans — and Chapman immediately knew she wanted this enthusiastic teacher on her team at Towneplace Suites.

Pierce is not the only member of the Towneplace team lacking hotel experience. Chapman prefers to hire based on personality — just three of her 20 team members have a hotel background.

“Our team is so awesome!” she beams. “We did team-building activities instead of traditional interviews to see how everyone worked together. They are full of energy.”

During the second group interview, the team dubbed themselves the “CocoNuts” which provided inspiration for naming the hotel bar “Coconut Cove.” The cocktail menu now features drinks named after the owners and managers, including “Lindsay’s Caribbean Cooler” and “Meagan’s Mojito.” 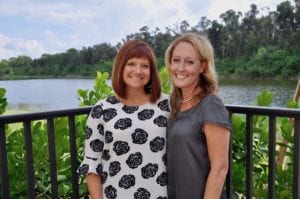 As the opening date grew near — in June after several construction delays — everyone pitched in to dust and clean. “I vacuumed the whole hotel,” says Pierce.

Meanwhile, Chapman was working 12-hour days, seven days a week to make the hotel feel welcoming. She replaced the standard Marriott artwork with wildlife photos by local photographer Dennis Goodman and paintings by realism artist Erma Jean. Chapman also has a talent for making “kissing swans” out of the towels, and she’s teaching her staff to do the same.

“It’s our home, and everybody takes ownership,” Chapman says. “These are our guests. And my team is family.”

To break up the intense workload for opening, Chapman directed plenty of goofy team-building activities like chalk line races in the parking lot. While getting her team ready inside the hotel, Chapman also was making connections within the community. She wasted no time in joining the Estero, Bonita Springs and Fort Myers chambers of commerce. And she began seeking out local veterans causes.

As the fiancée of U.S. Army Capt. Daniel Smith — currently stationed in Qatar — supporting the military is important to Chapman. The couple enjoyed national media attention last May when Smith surprised Chapman by proposing remotely via the Tampa Bay Rays video scoreboard during a home game against the Kansas City Royals. Rays mascot Raymond was enlisted to deliver the ring.

A huge Royals fan, Smith has been deployed since February and is scheduled to return in early November. “He’s missed the entire baseball season,” Chapman laments.

In honor of her military man, Chapman agreed to host a 5K race fundraiser in the parking lot of Towneplace Suites last June to benefit Miles of Smiles Foundation. The Miles Ranch in North Fort Myers helps veterans suffering from post-traumatic stress disorder (PTSD) using equine assisted therapies. Estero Chamber of Commerce Chairman Gene Montenieri connected Chapman to the cause and served as the event emcee for the Father’s Day weekend event.

Towneplace Suites has agreed to host another 5K event this month in honor of National Constitution Week. Local veteran Joseph Cofield, founder of the Constitution Project Inc., aims to get copies of the U.S. Constitution and the Declaration of Independence into the hands of every fifth grader in the state of Florida. The Sept. 16 event will include a 5K Fun Run and a two-mile fun walk which starts and finishes at the hotel. 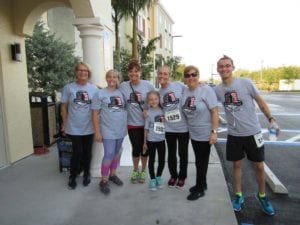 Although Chapman also has a wedding to plan (set for May 19, 2018, in Kansas City), that didn’t stop her from accepting an invitation from American Heart Association volunteer Barbara Saxton to co-chair the second annual Estero Heart Walk, scheduled for Feb. 18 at Estero Community Park.

“From our first conversation, she made it clear they wanted to give back and get involved,” says Montenieri of Chapman and her team at Towneplace Suites. “And they have been true to their word.”

Due to a global partnership between Hertz and Marriott, the new Towneplace Suites was intentionally built right down the street from the Hertz headquarters on Via Coconut Point. The location features several amenities including a waterfront pool and a large patio with deluxe Weber grills and a fire pit area for cozy conversation.

The property includes 114 suites with full kitchens and office areas. Nightly rates start at $129-149 in the low season and $249-279 in the high season, Chapman notes.

“We have a ‘noticeably clean’ hotel and not just any service but ‘exceptional service,’” adds Chapman.

The hotel also offers hot, complimentary breakfast daily. An interactive “touch” flatscreen in the lobby allows guests to access the weather and discover nearby places to “Eat, Live and Play.” The conference room accommodates groups of 16 to 34.

So far, every customer survey has come in at a perfect “10,” boasts Chapman. Her eyes sparkle as she adds: “We’re hoping to win every award!” 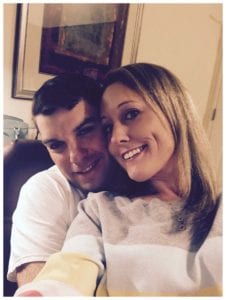 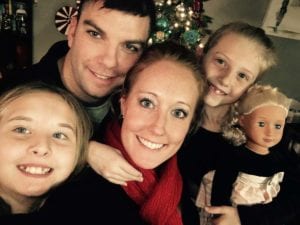 Entry fee: $25 for runners/walkers (includes refreshments and entertainment); Non-runner/walker activity tickets are a suggested donation of $10 for adults, $5 for students/children

The mission: Constitution Project Inc. aims to put a copy of the U.S. Constitution and Declaration of Independence in the hands of every 5th grader in Florida.