500 BC — The Calusa tribe migrates to Estero. Numbering about 50,000 at their peak, the Calusa used nets to catch mullet, pinfish, pigfish and catfish and spears to catch eels and turtles. They used fish-bone arrowheads to hunt for deer. Women and children learned to catch shellfish.

1513 — Ponce de León leads the first known European expedition to the land he named “La Florida” likely passing through Estero. Legend has it he sought the Fountain of Youth. When he returned eight years later, he attempted to establish a Spanish colony. Not only did the Calusa Indians resist, they shot Ponce de Leon with a poisoned arrow. He died from his wounds soon after returning to Cuba in 1521.

1600 — Mound Key was formed in Estero Bay, made entirely of fish bones and shells discarded by the Calusa mixed with clay. The Calusa also used shells for tools, utensils, jewelry and ornaments for their shrines. Later, pirates used Mound Key to attack passing ships and hide from the American Navy. Legends of pirate lore, Jose Gaspar – the namesake of Gasparilla Island — Juan Gomez and Black Augustus, hid in the bay.

1885 — Inventor Thomas Edison first came to Fort Myers and purchased 13 acres along the Caloosahatchee River as his winter retreat. He — sometimes along with his friend, Henry Ford — would become a regular visitor to the Koreshan settlement in Estero, drawn by his interest in exotic plants.

1894 — Cyrus Teed leads the Koreshan Unity to their “New Jerusalem” in Estero. Damkohler gave Teed all of his 300 acres, where the Koreshans built a a bakery, printing house, the “World College of Life,” a general store, concrete works and a power plant. The community was at its peak in 1903–1908 with more than 250 residents. Membership declined following Teed’s death in 1908.

1895 — The first Estero Post Office opens. For years, there were actually two post offices: one run by the Koreshans and the other by citrus growers, according to historian Georgia Nelson. When the post office in the Koreshan General Store became inadequate in the early 1950s, a small post office was built south of the store. In 1960, the post office was relocated to a storefront in San Carlos Park. Through the efforts of Koreshan Foundation President Hedwig Michel and her successor, Jo Bigelow, the post office returned to Estero in August 1983, built on Broadway Avenue. The current Estero Post Office on Three Oaks Parkway opened in 2005.

1904 — The Town of Estero is established (for the first time). “The largest city in Florida,” according to The News-Press, Estero spanned 110 square miles. It had a town seal, a mayor, a marshal, nine council members and one of the largest city land boundaries in Florida. Today, Estero has about 25 square miles. 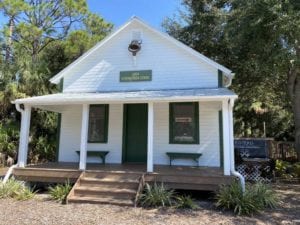 1904 — The same year as the town’s founding, Estero Creek School was built. The historic schoolhouse was moved to Estero Community Park in 2009, where it sits next to the 1906 Collier House, which serves as headquarters for the Estero Historical Society.

1927 — On Jan. 7, the Seaboard Airline Railroad passed by Estero on its way to Naples with 600 guests. Called the Orange Blossom Special – popularized by a Johnny Cash song – it went the opposite direction once it reached the end of its line in Naples.

1928 — The Tamiami Trail, so named because it connected Tampa to Miami, officially opened on April 26, 1928. It cost $8 million and needed 2.6 million sticks of dynamite for its construction, a process which lasted 13 years.

1945 — Electricity comes to Estero after the end of World War II.

1964 — A volunteer fire department is established, named Estero Precinct 12 Volunteer Fire Company No. 1. George Horne was appointed the first fire chief, a position he held for 18 years. In the early days, firefighting equipment was hard to come by. When a new fire engine or other equipment was needed, the community would host bake sales to help raise the money. The fire district did not have a paid employee until 1982, when Joe Linzalone succeeded Horne as fire chief.

1968 — Construction begins on Interstate 75 through Estero. Due to major growth in Southwest Florida, the state government first proposed to build a West Coast Turnpike in 1964, which would have been tolled. Plans were cancelled in 1968, when it was announced that U.S. Secretary of Transportation Alan Boyd had approved an extension of I-75 south to Naples and then east to Miami. 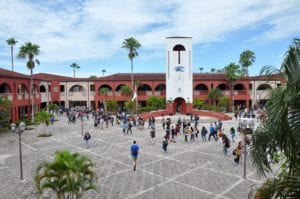 1987 — Estero’s first high school opens. Before that, students had to attend high school in Fort Myers.

1998 — Pro sports came to Estero when an arena was built for the Florida Everblades ice hockey team. Seating more than 7,100, the arena was constructed in less than a year and is also a designated hurricane shelter.

2006 — Coconut Point Mall opens, playing a major role in Estero’s growth. The center of a 500-acre master planned development, Coconut Point was touted as a model for a new generation of mixed-use shopping centers where retail stores and restaurants, living spaces and offices all blend into a vibrant community.

2013 — Hertz Corporation announces it will move its headquarters to Estero, bringing about 750 jobs. The $75 million building at the southeast corner of U.S. 41 and Williams Road is home to the first Fortune 500 company in Southwest Florida.

2014 — On Dec. 31, 2014, the Village of Estero was incorporated following overwhelming support on a voter referendum. Nick Batos, a champion of incorporation efforts, became Estero’s first mayor. An official Village of Estero seal was adopted on July 22, 2020.