Vincent Mancini could still see the dogs’ footprints embedded on the sand. Hours after greyhounds ran their final race at the Naples-Fort Myers Greyhound Track on May 3, 2020, he and fellow trainer Jade Fiese sat on the infield and walked around the track with their children. 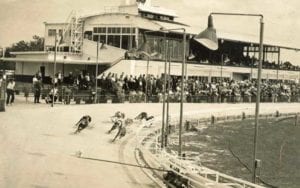 “My daughter asked me how I was feeling. It’s like losing my father all over again,” said Mancini, who is actually Vincent Mancini III, following his father Vincent, who taught him how to train greyhound pups.

For Fiese, the job was also a family affair. She learned from her mother, Sharon.

“It’s not just a job, it’s a life-long dedication,” Fiese said. “It’s like they were my family. At Christmas, you made sure the dogs were good. Then you had your holiday.”

Racing officials held one last race on May 3; COVID-19 made the track near-empty. Mancini could feel the finality as he watched the minutes tick off the tote board.

General Manager Juan Fra and Director of Lawn Maintenance Luis Joya were two of the lead-outs for the dogs’ last race. For them, it was nostalgic — the first job they held at the track 40 years ago.

“We wanted to go out with a celebration,” Fra said. “Now we go away without pomp and circumstance.” 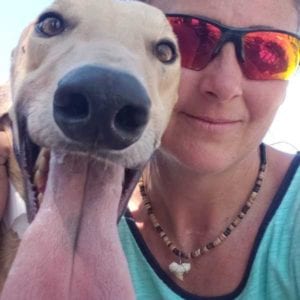 As they watched with tears in their eyes, attendees waited for a motorized rabbit to move and lure the eight greyhounds to follow. The announcer boomed: “For the final time, here comes Sparky!”

In the grandstand, Isadore Havenick, whose family owns the track, shot video of the final race. Less than 20 people watched from above.

“It was eerily quiet,” said Dave Kempton, who serves as media relations manager. “Deadly silent. A touch of sadness. Somber.”

No last cheers from a huge crowd. No last roar for the winning dog. No last scream in delight at a winning ticket (although $187,159 was wagered on the internet).

A part of Southwest Florida history faded away.

A new venue, the Bonita Springs Poker Room, will continue to offer betting. But the greyhounds will be gone.

Greyhound racing became the biggest spectator sport in Southwest Florida from the late 1950s through the 1980s. For 63 years, the dogs ran.

Kempton marvels when he looks at scrapbooks from the early days. 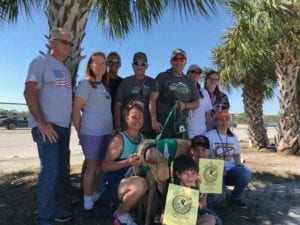 “They ran full-page ads in both papers (Naples and Fort Myers),” he said. “And the coverage was like the New York Yankees. Each paper had a sports writer and a columnist out regularly. The coverage, I was flabbergasted.”

Greyhound racing began in late December 1957 “in a setting that would rival the opening of a motion picture with Southwest Florida officials participating in festivities, models posing with the greyhounds and a large crowd causing a parking jam,” Kempton wrote. The first winner got paid $25.20 on a $2 bet.

After buying Miami’s Flagler Dog Track in 1953 and making it one of the most successful venues in the country, Isadore Hecht bought the Bonita Springs track in 1972. The Hecht family replaced the original building and kennels with a 250,000-square foot structure, capable of accommodating 10,000 people with a 600-seat clubhouse dining room. 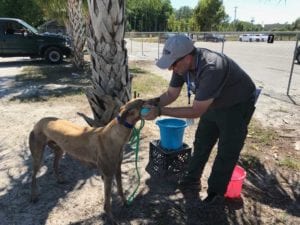 A 1973 Naples Daily News story asserted, “a barometer for measuring the growth of Southwest Florida is the greyhound kennel club in Bonita Springs with parimutuels of $15 million expected, ranking as a main attraction with the beaches, weather, baseball and fishing.”

“We had people coming from Port Charlotte to Marco Island,” Fra said.

Claudia Schwippert worked as a teller for 20 years before becoming parimutuels manager. She remembers derby nights with 7,000 attending. While two winter visitors won $100,000 on $2 bets, others threw winning trifecta tickets away.

“It was crazy at the end of the night when everyone wanted to cash their tickets,” Schwippert said. “I felt like a banker. Lines forever, clear to the outside.”

“Spring training was mostly in the day, and we were mostly at night, so we’d get the baseball players,” Fra said. “People would go to the beaches during the day and the track at night. We also had matinees on Wednesdays and Saturdays. It was pretty easy to do business back then.”

On Jan. 12, 1988, the Florida lottery began. In 1994, the Seminole Casino in Immokalee opened and expanded from bingo to table games and slot machines.

“When Florida did the lottery, we took a decent hit from that,” Fra said. “Once Indian gaming brought in table games and slots, that took away more. ESPN and cable TV, then the internet, that led to more people staying at home.”

To keep up with the competition, the tracks petitioned the state legislature to allow other forms of betting in the 1990s such as slot machines, which Lee County voters approved. However, it was never enacted statewide so the track did not benefit.

A final blow came when reports showed greyhounds dying in races and investigations of the dogs being neglected. People for the Ethical Treatment of 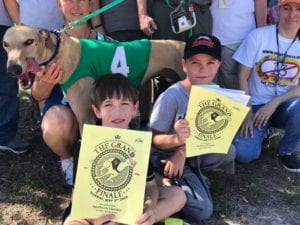 Animals (PETA) and other activists started a crusade to get rid of greyhound racing in Florida.

“I contend that the public doesn’t understand that racing greyhounds are the most highly regulated breed in the country,” Mancini said. “The injury rate in these athletes, which can include muscle strains, nicks and abrasions, is on par and in most cases far below that of the general pet population. In my entire career as a licensed greyhound trainer and a veterinary technician, I have never seen anything but admiration and love shown to these dogs by their caretakers.”

For Fiese and Mancini, the perception is painful. But even more painful is that it’s over.

“I have something else to go to,” said Mancini, who is hospital manager for Bonita Veterinary Hospital. “Many of these folks don’t.”

Some people, like Fiese, will have to find a new career. This is a trainer who had two stakes winners in 7 ½ years and was a national champion.

“I’m so empty,” she said. “Can I do other things? Of course. But it’s not going to replace a life I chose to walk in my mom’s footsteps.”

Last month, the track owners opened a new 32,000-square-foot, state-of-the-art building just north of the track on Bonita Beach Road. The Bonita Springs Poker Room includes about 30 poker tables, along with simulcasting of races from around the U.S. and even the world. 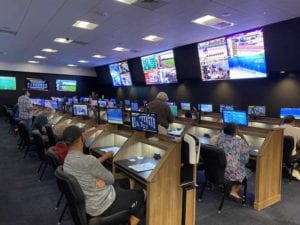 Bettors will have many online opportunities, wagering on events that include thoroughbred and harness racing, jai alai matches and, ironically, greyhound racing — but it’ll be from places like Iowa, Arkansas, West Virginia and Texas. The new facility also has an impressive bar and grill called The Brass Tap.

“Our poker players were starved for a new building,” Fra said.

The current building will be demolished, which will open up 100 acres of prime Southwest Florida real estate. But the race track will remain.

“It’ll be a memory of what was,” Kempton said.