For the well-traveled foodies among us, there’s something particularly comforting about the homey, meat-and-potatoes menu of a German restaurant. Add in a little flavor from the Alpine region to the south, and you have the Swiss German Bistro.
Formerly Stephan’s German Bistro, this renamed eatery is now run by a native of Switzerland, Chef Ralf Scheidegger. He kept the favorites from Stephan’s menu and added a few traditional Swiss dishes. There’s classic German bratwurst — served with both German and Swiss mustards (Swiss brand “Thomy” is delivered in its blue, toothpaste-like tube). And then there’s Swiss-style Bratwurst, topped with onion gravy.
Other Swiss entrees include Alpler Rosti, a Swiss hash brown baked with cheese and egg on top, and Zuri Gschnatzlets, a Swiss pork specialty. Fans of traditional German fare can rest assured that potato pancakes, wiener schnitzel and spaetzle remain staples of the menu.
German-Swiss cuisine is typically well received by American palates. It’s certainly not health food, says Chef Ralf with a chuckle. Many items on the menu are fried and full of savory flavor. Add to this an ample collection of imported German beers — including top sellers like Warsteiner and Koig Ludwig (“King Lui”) — and you’ve got a classic German meal. There’s also a Czech beer, Pilsner Urqell, on tap.
Sides are traditional with sauerkraut, red cabbage, roasted German potatoes and fried spaetzle noodles all tasty options to complement the cuisine. Equal to the quality of the food is the value of menu pricing. Dinner entrees are just $12-16, a bargain for homemade European cooking.
The location in The Prado lacks foot traffic, but the Swiss German Bistro should be a destination for any dining enthusiast. The atmosphere is cozy with just a dozen tables, and casual attire is acceptable. Chef Ralf is unpretentious and enjoys making conversation with his guests.
Dinner music comes compliments of a video screen featuring Andre Rieu, the Dutch “King of Romance” and his 60-piece, waltz-playing Johann Strauss Orchestra. Sometimes guests finish their meals and linger just to finish watching the concert, says Chef Ralf.
He has a Swiss gastro-economics degree and previously managed pubs, restaurants and hotels in Switzerland before coming the United States.
“I’m doing what I love,” says the chef-owner of Southwest Florida’s Swiss German Bistro. “I’m a cook, and I’m a host. When I do things, I do them right. It’s homemade, traditional food, and everything is made fresh.”
That includes the finishing element for any meal at this cozy bistro: the homemade German Apple Strudel! 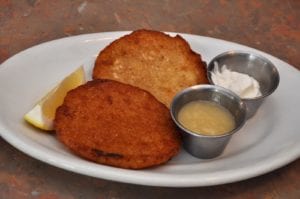 German Potato Pancakes
Kartoffelpuffer (potato pancakes) are served at every German festival and are popular street food in nearly all regions of Germany. They conjure up memories of childhood, offering that comforting, crispy-fried flavor we all love. Try this traditional starter with sour cream, or add a bit of sweetness with applesauce. 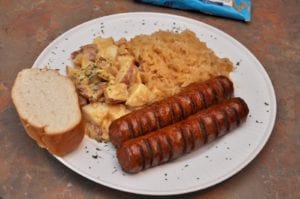 German Bratwurst
It doesn’t get any more traditional than this. Classic German sausage is served with the traditional sides of sauerkraut, roasted potatoes and white bread. Mustard connoisseurs can choose between a German variety, made from both yellow and brown mustard seeds, or classic Swiss “Thomy” brand yellow mustard. Make sure to add an imported German beer. 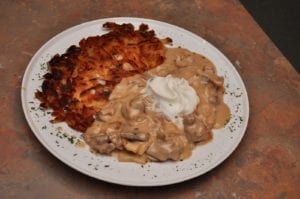 Zuri Gschnatzlets
This is a Swiss specialty Chef Ralf wisely brought to the bistro menu. It starts with tender, sliced pork which is subsequently slathered in a creamy mushroom, white wine sauce with sautéed onions. It’s perfectly paired with crispy-fried Swiss hash browns (Rösti) as a conduit for enjoying every bit of that succulent sauce. 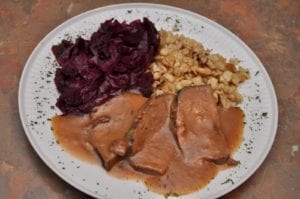 Sauerbraten
Sauerbraten is Chef Ralf’s “weekend special.” Angus beef is marinated for 10 days in vinegar and red wine, then roasted until fork-tender. This “German pot roast” is served with delicious brown gravy and complemented with the acidity of red cabbage salad and the succulent flavor of homemade spaetzle, an egg noodle side grilled in butter. 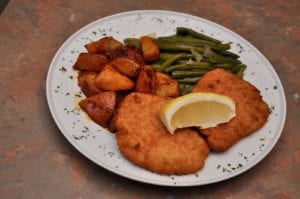 Wiener Schnitzel
Originating in Austria, this traditional dish is a favorite throughout the Alpine states. Chef Ralf uses pork cutlets, lightly breaded and then pan-friend golden brown. Try it with classic sides like red cabbage and spaetzle, or as pictured with seasoned green beans and roasted paprika potatoes. 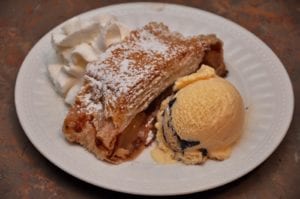 Apple Strudel
There’s just one dessert on the bistro menu, and that’s just fine. Because after you try Chef Ralf’s homemade Apple Strudel, why would you want anything else? This German apple pie is served with vanilla ice cream and fresh whipped cream. It’s the perfect sweet note to finish off a pleasant European dining experience.