As restaurants come and go at Coconut Point Mall, South Fork Grille has shown staying power. This locally owned eatery is refined yet relaxing with cuisine that is both perfectly presented and palate pleasing.
Inside, you’ll find white linens, candle-lit tables and bottles of wine lining the wall. However, there’s also a casual bar area with brightly colored walls to match the lively conversation. Outside, the patio is pet-friendly and conducive to dining with the whole family.
The South Fork name is a nod to the hometown of owners Donna Scali-Sofia and Joe Sofia, who moved to Estero from Long Island’s South Fork. On the lunch menu, the restaurant’s popular Montauk Lobster Roll offers a “taste of home” for those from the Northeast.
The couple began their venture into restaurant ownership with a wine bar franchise called The Grape but soon realized customers wanted more food options. Thus, South Fork Grille was born. It still offers many wine-by-the-glass selections but maintains the freedom to continually evolve as a locally owned eatery.
“We’re ‘mom-and-pop’ owned; it’s not a corporation, so it has that family feel,” says Donna. “We are local people serving local ingredients.” 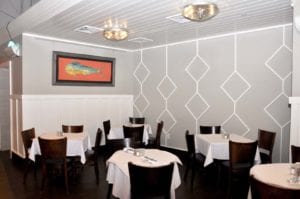 In farm-to-table fashion, South Fork uses fresh produce from Oakes Farms, which harvests from about 4,000 acres in South Florida, mainly in Immokalee. Likewise, South Fork works with local fishermen to source fresh fish from the Gulf. Other seafood selections are delivered daily for ultimate flavor and freshness.
“We don’t have a walk-in fridge or a freezer, so we really do order fresh daily,” says Donna.
South Fork’s new chef, Shaune Barnes, went to culinary school in San Francisco and started his career in the food mecca of New York City. In the kitchen of award-winning chef Marcus Samuelsson at Aquavit, Barnes learned to be cognizant of the smallest of details and to value consistency. He then moved to the hotel world, working for many five-diamond properties including Ritz Carlton in San Juan and Naples Beach.
His passion for cooking began in his late teens while volunteering in the kitchen of the hospital where his mother worked as a dietitian. He developed a love for the sounds he heard, from the banging of pots to the sizzle of sauté pans. Living in San Francisco, Barnes was exposed to an abundance of fresh ingredients and learned to appreciate sophisticated cuisine.
Before joining South Fork, he managed the kitchens of Quail West Country Club and West Bay Beach Club. Chef Barnes now brings his vast culinary experience and enthusiasm to the kitchen of South Fork Grille, where he is unleashing his creative juices. Well-received “chef’s specials” like the Veal Milanese will likely be added to the South Fork menu this fall, says Donna.
However, South Fork regulars can rest assured that Chef Barnes is not overhauling the menu, just adding tasty touches to many favorite dishes. For example, he’s kicked up the flavor of the South Fork Pork Chop by wrapping it in bacon. Chef’s Specials for summer include Confetti Snapper, Italian Wedding Soup and a “Summer Me” cocktail with peach vodka and orange slices.
The South Fork staff aims to please and will gladly accommodate special requests. Many menu selections can be prepared gluten-free, and ingredients can be added or removed to suit a guest’s taste.
“Our number one priority is consistency and great food,” says the chef. 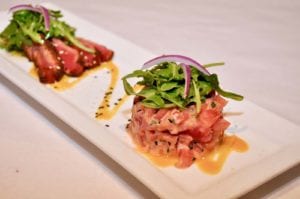 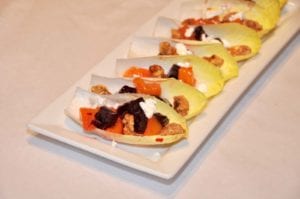 Seasonal Salad
South Fork’s best-selling salad comes in bite-sized portions, festively cradled in an endive leaf. The Seasonal Salad bursts with flavor as the richness of beets blends magically with the pungency of goat cheese and the sweetness of butternut squash and candied walnuts. 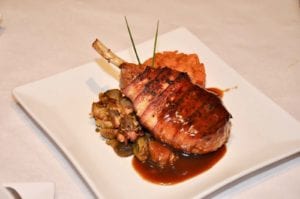 Bacon-Wrapped Pork Chop
This bone-in beauty is unbelievably tender and flavor-infused, thanks to Chef Barnes’ addition of a bacon wrap. A sweet-and-smoky dry rub enhances the savor while the Fuji apple demi-glace adds a hint of sweetness. It’s served with a succulent sweet potato hash and roasted Brussels sprouts (also infused with that savory bacon flavor)! 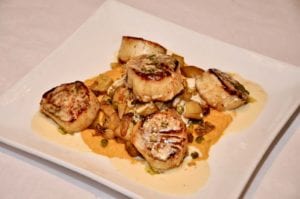 Seared Scallops
These scallops are big and meaty and melt-in-your-mouth tender! Hearty fingerling potato hash adds flavor, along with the earthiness of corn puree and English peas, all drizzled in a succulent blue cheese sauce. Terrific! 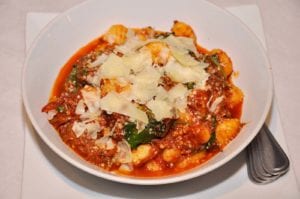 Braised Beef Gnocchi
This is Italian-inspired comfort food. Short ribs are slow roasted and braised to prefect tenderness, then combined with a hearty tomato sauce with spinach and potato gnocchi. It’s topped with fresh-grated parmesan cheese and served with love. 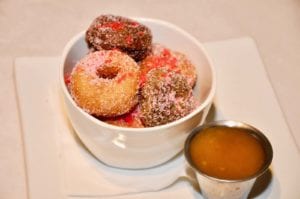