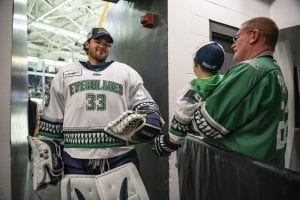 The Florida Everblades goaltender has two cats: Puss Puss, 12, and Si, 7. And he once starred in a holiday video for the Binghamton Devils in the American Hockey League.

“He’s goofy. Not many can talk to Cam and not love him,” said long-time friend Christian Wolanin of the NHL’s Ottawa Senators.

Johnson admits he had a bit of performance anxiety, but there was more behind his repeated vomiting during games. A battery of tests revealed food allergies.

A groin injury last season may have been a blessing in disguise because when he came back, Johnson and Florida took off. The Blades won 10 of their last 12 games to complete a 21-2-2 stretch that helped them end the season tied with the South Carolina Stingrays with 92 points, the most in the ECHL. Johnson went 13-5-1 with a 2.51 goals-against–average.

With 10 games left in the regular season, the global pandemic stopped Florida’s chance at a possible Kelly Cup, which would’ve been the team’s second title in team history. The playoffs were canceled.

“We were hot,” Johnson said. “We were such a tight-knit group. We were trying to get everyone to come back in the offseason because we had a sour taste in our mouths.”

However, nearly a dozen players were called up to the American Hockey League (AHL).

“That was the biggest bummer with COVID,” Johnson said. 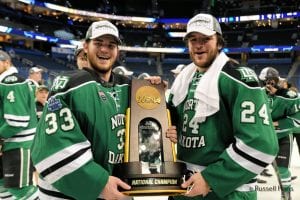 That’s also how he built a friendship with Wolanin, who was a year younger. They played together on several teams: youth hockey, AAA hockey, the United States Hockey League in Green Bay, Wis., and at North Dakota.

“We won a state championship and a national championship at North Dakota,” Wolanin said. “We were roommates. I think we played on seven different teams. We were friends through it all.”

After leaving North Dakota, Johnson literally started to feel differently. As he succinctly put it, “Once you’re a pro, it’s your job.”

Hockey players can sweat a lot, but Johnson was losing 10-12 pounds a game in water weight. And when he had food panel sensitivity and blood tests, he found out he had about a half-dozen allergies.

“I saw three or four GI doctors,” he said. One doctor thought it was irritable bowel syndrome, another acid reflux. “They couldn’t figure it out. It was a lot of trial and error.”

Wolanin kidded him about it but then realized it was something more serious.

“There’s so much on your mind as a hockey player,” Wolanin said. “You’re thinking of a  million things so you have to be your best mentally and physically. It’s hard to juggle. And when you’re not feeling yourself, it’s not easy.”

The problem continued when Johnson joined the Everblades. On Nov. 29, in the final minutes of a game against Utah, Johnson had to come off the ice because he was vomiting. He returned and earned the victory.

“We said, ‘How’s he gonna get through this?’,” Ralph recalled. “He’s a really good communicator and honest with how he’s feeling. We had really good talks, and the coaching staff implemented a nutrition plan for him.” 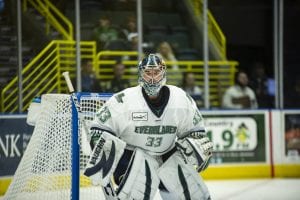 Johnson also eliminated gluten and sugars. A typical meal for him was chicken, sweet potato and quinoa. While he recovered from his groin injury, he detoxed his body. When he returned, Johnson had lost 20 pounds.

“He visibly looked different,” Ralph said. “He was in better shape in every way. He corrected his anxiety. He was so driven when he came back. He was the goalie we thought he could be. He came back on fire.”

By the end of the season, Ralph said, in Johnson and Ken Appleby, he felt like he had the best two goalies in the ECHL.

Johnson said he focused on playing hockey instead of working hockey.

“I kind of relaxed,” he said. “I played for the love of the game. I quit worrying about what level I was at.”

In his pro career, Johnson suited for seven NHL games but never played.

“I want to see him best his best,” said Wolanin. “I want him to win a championship. I’m glad he’s really happy in Fort Myers. I’d love to see him back in the NHL.”

The season may be getting a late start, but it still promises plenty of on-the-ice action.

Blades fans will be required to wear masks to the games and asked to social distance. The number of fans that will be allowed at games is yet to be determined. For more information, call the team’s box office at 948-PUCK (7825).

State of Florida guidelines have no limits on the number of people who can attend sporting events, but NFL teams in Tampa Bay, Miami and Jacksonville have had attendances between 6,500 and 16,500, which is about 10-25 percent of capacity.

Because of capacity restrictions in some states due to the novel coronavirus, a total of 13 teams will start play the second weekend in December and aim to play a 72-game, regular-season schedule. The ECHL will have a second start date of Jan. 15 where teams will play 62 games. The regular season will end on June 6.

Under the split-season scenario, league standings will be based on winning percentage during the regular season. The post-season format will be based on the eligible competing teams in the regular season and will be announced at a later date. The Atlanta Gladiators and Norfolk Admirals opted out this season, and other ECHL teams had until Nov. 30 to decide whether to opt out.

Florida’s last scheduled regular-season game is Jan. 13. New games will be put on the schedule once league officials know what teams will compete in 2021.

Fans who buy a new Blades 365 membership for the 2020-21 season will receive a $20 gift card to Ford’s Garage, an Everblades tote bag and a free pizza every month during the regular season. Ticket plans vary.

For those who prefer to stay home and watch the team’s game via video stream, FloSports has been named the new provider for ECHL.TV, beginning with the 2020-21 season.