It’s easy to marvel at the opulence of Ocean Prime. Mirrors and glass. Greetings by the maitre d’. White linens and a wall of wine.

Ocean Prime meets the expectation of Naples Fifth Avenue sophistication, yet it doesn’t feel stuffy. The atmosphere is upscale yet relaxed. Classy yet social.

The vibe is a bit like the restaurant’s founder himself. Cameron Mitchell is a renowned restaurateur with more than a dozen national brands, yet he’s anything but pretentious. His roots are humble. He’s a self-made man who remains grateful for a second chance.

It was 1981, and Mitchell was a high school dropout working as a dish washer and line cook for a Columbus, Ohio, steakhouse.

“I was 18 years old, working for beer money and living with my mom,” recalls the restaurant mogul. “I was the laziest guy in the kitchen, didn’t want to work and didn’t know where I was going.”

He had just come back to the restaurant after a three-day suspension for tardiness when he had an epiphany amid the noise and chaos in the kitchen: “This is what I want to do with my life. I love this business.”

He later woke his mother at 1 a.m. to share his vision: He was going to attend the prestigious Culinary Institute of America, become an executive chef by age 23 and eventually lead his own restaurant company.

“I literally did a 180-degree turn overnight,” Mitchell says. “I became the hardest working guy in the kitchen.”

Mitchell has since checked off all of his benchmarks (notably selling two of his early concepts to Ruth’s Hospitality Group), and he’s determined to help others do the same. “I’m always a believer in people,” he says. Most of his management team has been promoted from within, working their way up through the ranks of the restaurant business.

This includes Ocean Prime Naples General Manager Rick Giannasi, a onetime soap opera actor who joined Ocean Prime Orlando in 2007 as a mixologist, as well as Executive Chef Jason Mallon, who started with Ocean Prime Tampa in 2009 as a broil cook.

Both openly express their appreciation for the Ocean Prime culture, which puts people first. That extends to the restaurant’s patrons. Mitchell trains all his new associates: “The answer is, ‘Yes.’ What’s the question?”
This philosophy grew out of a time when a restaurant refused to make a milkshake for Mitchell’s son. It wasn’t on the menu, but Mitchell knew the restaurant had everything needed to fulfill this simple request. Now the milkshake is the symbol of his corporation’s can-do creed.

Ocean Prime Naples is the luxe brand’s 14th location and is the ideal complement to the adjacent Inn on Fifth. A regal remnant from the former occupant (Avenue 5) is an impressive, floor-to-ceiling glass enclosure, showcasing hundreds of wine bottles.

Each Ocean Prime location is designed to reflect the local culture. Here this manifests in artwork by Naples photographer Gareth Rockliffe and a coral sculptural element partitioning the wrap-around center bar from the front dining room.

Our table offered an uninhibited view of the Sugden Theatre square — with its lighted palms and passersby — compliments of sliding glass walls, which can be opened for al fresco dining. The restaurant also features two private dining rooms for special celebrations and events.

Servers are trained as “tour guides,” and Matt did a marvelous job of walking us through the mouthwatering menu selections. He started with Gulf specialties, then took us to the Midwest, the source of Ocean Prime’s grain-fed beef. The exception is a monster 22-ounce Cowboy Ribeye, sourced locally from Jackman Wagyu Beef in Clewiston, Fla.

Ocean Prime would definitely be a “prime” date for Valentine’s Day, but make reservations early. This newest restaurant concept on Fifth Avenue has been swarming since opening right before Christmas and shows no signs of slowing now that high season is in full swing. 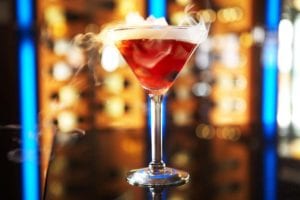 This signature cocktail gets the party started. It’s mixed table-side so all can enjoy the effervescent entertainment
as Belvedere Cytrus Vodka, Cassis, House-made Sour, Domaine Chandon Brut and marinated berries react with dry ice to smoke and bubble while you sip. The Black Orchid, another impressive cocktail, also enchants with an ice-encapsulated orchid that unfurls as it melts. 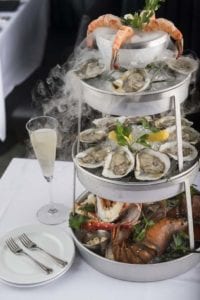 Sushi and raw bar selections make terrific starters, but none is more impressive than this “smoking” tower of shrimp, crab, and oysters. Dry ice again provides the magic as this tall tower arrives at the table with frosty flair. The tower can be custom built according to guests’ preferences. Ours featured Chilled Crab Meat Cocktail, Dutch Harbor King Crab Legs and both East and West Coast oysters on the half shell. 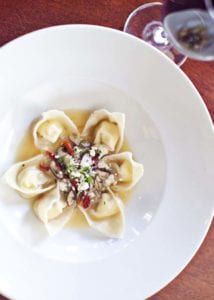 One of the most popular appetizers at Ocean Prime, this luscious wonton ravioli is made in-house and filled with Sonoma Goat Cheese and Golden Oak Mushrooms. It’s served in lemon-herb chicken broth and topped with more goat cheese, along with sun-dried tomatoes. We also enjoyed Point Judith Calamari with sweet chili sauce and house-made candied cashews. 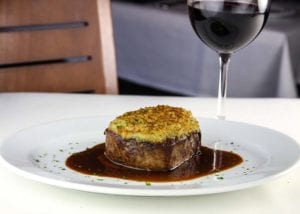 Both steaks we tried were juicy and flavorful, but the Maytag Blue Cheese Crust made this 10 oz. filet stand out. This tender cut of beef is topped with the distinctive flavor of blue cheese mixed with panko breadcrumbs, creating a crispy, creamy addition to a succulent steak. All Ocean Prime steaks are quick broiled at 1200 degrees to sear the outside while maintaining tenderness. 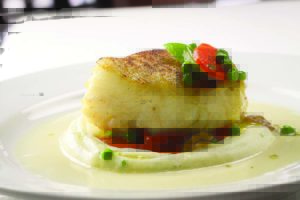 While the Naples menu features some local exclusives like Black Grouper, it also maintains the most popular seafood entrees found at all Ocean Prime locations. Chilean Sea Bass is known for its higher fat content, giving it a mild, buttery flavor. Ocean Prime’s version comes with a nice broiled crust and is served over “creamy dreamy” mashed potatoes, topped with a luscious Champagne White Truffle sauce. 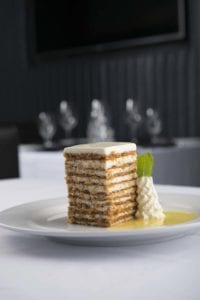 After an abundance of good food, it might feel prudent to skip dessert. But that would be a mistake. Ocean Prime impresses to the last, sweet bite. This towering carrot cake is a stunning 10 layers, with cream cheese icing,
pineapple syrup and coconut in between. Another great choice is the sinfully rich Chocolate Peanut Butter Pie.
This decadent dessert features whipped, peanut butter mousse, encased in bittersweet chocolate ganache. Balance the sweetness with an espresso or cappuccino.