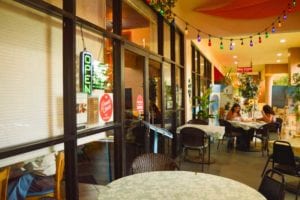 The cuisine can be best described as traditional Greek with a contemporary twist. Relaxing with a glass of Greek wine, customers can be seen feasting on everything from traditional plates such as gyros and mousakka (an eggplant casserole) to authentic Greek salad and house-made desserts.

Owners Christos and Dena Poulias have been in the restaurant business for over 30 years. While both hail from Greece, the couple met many years later in Columbus, Ohio. Christos moved to the United States at age 13, while Dena came as an infant; both maintained a passion for Greek cuisine.

In 1988, the duo took on the challenge of entering the restaurant industry when a nearby relative was selling his deli. Since the eatery already had name recognition, Christos and Dena decided to keep the deli and add a few Greek menu options such as the popular gyro sandwich. After gaining experience running this operation, the self-made chefs moved their family to Naples, Fla., in March 2016, opening Mykonos Kuzina by December of that year.

Today, the restaurant runs like a well-oiled machine. Christos is the head cuisine chef, specializing in blending traditional Greek dishes with innovative ideas, herbs, spices and cooking methods often drawn from family trips to Greece. Dena serves as the pastry chef, crafting delicious Old World-style desserts on a daily basis. Sons Nicko and Costa are on staff as well, working in the kitchen and front of the house, respectively.

“We are always here,” says Dena, “We focus all our energy on the restaurant.” 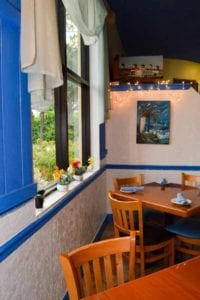 With so many family members on staff (including Dena’s sister, “Popi” Russell), the love and excitement shared between them is passed on to each guest they welcome.

With impeccable customer service and mouthwatering cuisine, the Greek restaurant enjoys many regular customers. Guests are accommodated with comfortable seating offered both indoors and outside on the veranda. Servers say, “Kali Orexi” — meaning “enjoy your food” — as they bring flavorful, homemade meals to the table.

While many of the family’s recipes have been perfected over time, a few classics like hand-rolled Dolmades (stuffed grape leaves), Tzatziki sauce, Roasted Red Pepper Hummus, and Galactoboureko (a delectable stuffed custard wrapped in phyllo dough) come directly from Christos’ mother’s cookbook. These small, but distinctive special touches have propelled the restaurant’s success.

Additionally, Mykonos Kuzina uses only the freshest ingredients to prepare its dishes. A grand portion of their food products come from Southwest Florida producers; however, some ingredients, including grape leaves and olive oil, are sourced from suppliers in Tarpon Springs, Fla., a haven for many Greek Americans.

“If you don’t know much about Greek cuisine, go with the Souvlaki,” recommends Dena.

This classic Greek street food features an abundance of variety, with options for pork, lamb, chicken, shrimp or vegetarian. The establishment truly offers something for everyone. Its genuine, friendly atmosphere coupled with its heavenly, homemade dishes is inimitable. Whether you are a connoisseur or a novice when it comes to Mediterranean cuisine, Mykonos Kuzina will leave you feeling delighted.