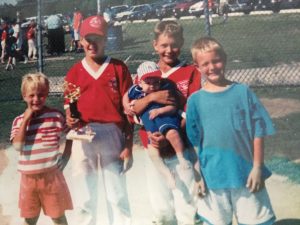 The manager mom behind Team Gronkowski

Athletes aren’t born overnight. Even players with immense natural talent require plenty of training and preparation, not to mention familial support. Diane Gronkowski-Walters dove full-bore into her motherhood role and ultimately became the captain of one of the best teams in the country — her own famously athletic family.

A full-time resident of Estero since 2014, this celebrity sports mom has been the constant support behind the scenes — nurturing, chauffeuring, planning, feeding (oh, the feeding!) and meticulous scheduling. Each of her five sons became professional athletes: four football players in the NFL and one son in Major League Baseball.

Rob, the second youngest Gronkowski and the most well-known, has been affectionately nicknamed “Gronk” during his illustrious NFL career. He is easily one of the greatest tight ends in NFL history, teaming up with Tom Brady in New England from 2010-2018. Gronk has been to six Super Bowls, earned four Super Bowl rings, and has been named All-Pro five times.

People often ask Diane what’s in her and her ex-husband’s genes to create so many professional athletes in one family. The odds of just one person in a family going pro are slim.  According to research by the NCAA, only 1.6 percent of college-level football players will be drafted to the NFL, and 8.6 percent of college baseball players are drafted to the MLB. The fact that all five of Diane and Gordon Gronkowski’s children were professional athletes is astounding.

Diane played basketball at her private Catholic girls school in upstate New York, but girls’ sports were limited at the time. Gordon played football in high school and also played for Syracuse University. He founded a high-end fitness company in 1990 under the name G&G Fitness Equipment in Buffalo, NY.  As the Gronkowski sons got older and more involved, G&G Fitness expanded into Gronk Fitness and integrated a line of equipment the brothers use in their own workouts. 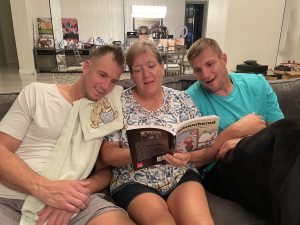 Mama Gronk with Gordie and Rob

Eldest son Gordie Jr. is the baseball player. He was drafted by the Los Angeles Angels in 2006 and then moved to the minor leagues for six years before retiring with an injury. Son Dan was drafted by the NFL’s Detroit Lions in 2009, followed by the Denver Broncos in 2010 and the New England Patriots in 2011, playing with younger brother Rob before heading to the Cleveland Browns for the 2011 and 2012 seasons.

Next in line, son Chris signed with the Dallas Cowboys in 2010, was picked up by the Indianapolis Colts in 2011, and was traded to the Denver Broncos in 2012. Shortly after, he signed with the San Diego Chargers before retiring due to injury. Baby brother Glenn signed with the Buffalo Bills in 2006, and later that year, was released and signed to the New England Patriots practice squad, joining his big brother Rob. He has a Super Bowl ring from the 2016 game and played preseason in 2017 but was released.

After retiring ahead of the Patriots’ 2019 season, superstar Rob returned to the NFL in 2020 to team up again with Brady, playing for the Tampa Bay Buccaneers. Part of the reason, he told the media, was proximity to his mother in Estero.

Just a few short weeks ago in June 2022, Rob announced his retirement from the Buccaneers. General Manager Jason Licht, as quoted in The New York Times, had this to say about the legendary Gronk: “While his on-field accomplishments will surely earn him a gold jacket and a place in the Pro Football Hall of Fame, it is his humble attitude and team-first approach to the game that truly defined his career.”

The night before he announced his retirement, Rob called his mom. The news didn’t put her over the moon. She knew how much he loved football, the people and the entertainment of it all — and she thought he still had a few years left in him.

“I can see why he retired, but I was really upset because we were finally at a point in life where I didn’t have to travel across the country to see him. Having him in Tampa, oh my gosh, what a great thing it was for me,” Diane said.

“If he had off on Tuesday, he would come hang out and head back that night. In these past two years he’s been in Tampa, I’ve seen him more than I have since he was 18 years old.”

All of her other sons live in different states but would often travel to Florida to see Rob play and visit their mom, particularly enjoying the sunshine during the winter months. At one point during the COVID-19 shutdowns, Rob stayed with his mom for two weeks straight — a blessing for a mother whose sons are widely dispersed throughout the country with families and lives of their own.

Gordie, Jr. lives in Boston and works in sales for their family business, Gronk Fitness; he’s also launching a vitamin drink called Vue. Dan is married with three sons and a daughter and also works for Gronk Fitness, living near their hometown in Buffalo, NY. Chris lives in Texas with his wife, their three young sons and new baby girl. He successfully pitched his Ice Shaker business on ABC’s “Shark Tank,” and he and his wife also have an online business called EverythingDecorated.com. Glenn lives in Texas and works for REVELXP, a company that provides elite sports fan experiences.

The Gronkowski brothers also founded Gronk Nation Youth Foundation, which is dedicated to inspiring youth to reach their maximum potential through sports, education, community and fitness. The foundation provides grants to sports programs and offers celebrity appearances at events for nonprofit partner organizations. 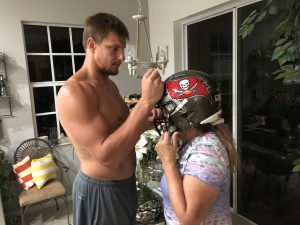 Rob goofing around with Mama Gronk

Many people told Diane she should write a book about her experiences. With the help of ghost writer Susan Irving Monshaw, she did just that, recently releasing her memoir, “Outnumbered: How an Average Supermom Raised Five Professional Athletes.”

The book takes a closer look into the life of a mom who did everything and anything to keep her family running smoothly, both on the field and off. It is also Diane’s goal to shine a light on the parents who choose to stay at home full-time with their children — those whose sacrifices often go unrecognized.

The five Gronkowski brothers played almost every sport imaginable: baseball, football, basketball, hockey, skiing, golf, tennis — and they even squeezed in time for paper routes. The boys turned everything into a competition with brother Rob often playing the role of comedian to diffuse any tension.

In “Outnumbered,” Diane recalls, “Looking back, I realize that the constant in my life is food. Thinking about food, budgeting, shopping, cooking, cleaning up food. It also meant watching with great pleasure while my five boys enjoyed their meals as they grew bigger and stronger right before my eyes.”

And stronger they got! Diane calculated the combined birth weight of her five sons at 39 pounds, 14 ounces. These days, they’re a combined 1,271 pounds!

Hockey was the first sport to spark the boy’s enduring passion for athletic competition. It was also the catalyst for Diane’s long journey of managing five boys’ varied practices, games and travel events. Although often exhausted, Diane was proud of her sons’ dedication to their grueling sports schedules.

“I really enjoyed having a front-row seat at what would become a lifelong passion and livelihood for my sons,” she said.

As the boys’ transitioned to college sports, Diane achieved a career record of covering roughly 500,000 miles, 18 states and two countries. When her boys went pro and relocated throughout the country, she helped them move and stock the fridge. Mama Gronk continued to attend as many games as she could.

How did she do it? No coffee, no smoking, no drinking, and no time for TV. Diane was always the first to rise, prepping everyone’s food and gear for the day ahead. This meant advanced planning. Thankfully, Diane found she had an aptitude for list-making and scheduling.

“There were always surprises, so you had to prepare for what you could…my biggest tools of survival were my lists and a big calendar with everyone’s activities on them,” she recalled. Today most of Diane’s sons use a similar planning system to keep their adult lives in order.

Outnumbered (But Not Unappreciated)

One of the greatest challenges Diane faced as a mother of five boys was feeling “outnumbered.” In addition to the disproportionate amount of testosterone in the household, there was often a feeling of isolation as a stay-at-home mom.

“I strongly feel that stay-at-home parents do not get enough credit,” she emphasizes in her book. “24/7 parenting is not for the faint of heart, but it is one of the most important things a person can do — for their children, for their family and for the future of our country.”

With all of the mayhem that followed her tribe, Diane says they were rarely invited to other people’s homes. So it was up to the boys to bring the social life to the Gronkowski home. And Mama Gronk didn’t mind. She provided a lively, inviting atmosphere, offering plenty of food and a whole lot of patience. From early on, a club was formed that consisted of five boys, two dogs and a whole lot of classmates and teammates who came for the food and friendship. 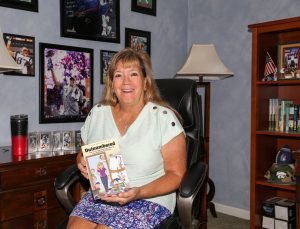 “The ultimate goal of a watchful parent — knowing your kids’ friends — is not always easy to achieve. I learned a lot from overheard conversations delivered through mouthfuls of burgers and cookies,” she said.

With five competitive boys, a level of competition and tussling was ever present in the household. Yet the Gronkowski boys knew they were always part of the family team.

“It doesn’t matter how good you are,” Diane would tell her boys, “you are always part of a team, and people rely on you.”

Today her grown boys still support one another. In Outnumbered, she writes, “Even as adults, those Gronkowski brothers reach out to one another for advice, help, and camaraderie. It makes me feel so wonderful seeing them involved in one another’s business ventures, showing up at football games, having a great time every time they get together.”

As someone who chose to be a stay-at-home mom and forgo career accolades for herself, Diane admits in her candid book that she felt absolutely thrilled the first time she saw her last name on an NFL jumbotron.

However, fame has its downsides. When Rob comes to Estero to visit, they have to scope out the community pool before he can peacefully go for a swim. If there are too many young adults or men (potential football fans), Rob has to hang back, because people won’t leave him alone.

What does the future hold now that Rob has retired from Tampa Bay? Diane can’t say, but she knows she isn’t leaving Estero. Her parents live close in Venice, Fla., and she runs a successful home watch and handyman business with her husband, Mike Walters.

“We absolutely love it here,” she says.

To learn more about Diane Gronkowski-Walters and her wild ride of raising five incredible athletes and “all-around good human beings,” you can purchase her memoir, “Outnumbered: How an Average Supermom Raised Five Professional Athletes” from Amazon and Barnes & Noble. 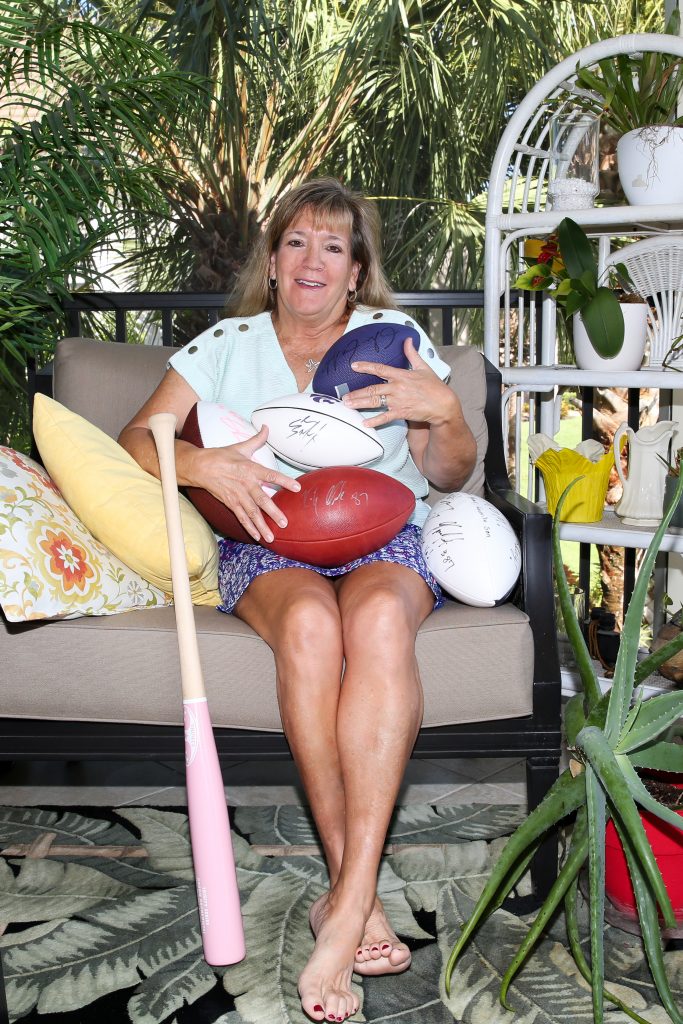