Jay Andrew Lensink has been dabbling in the arts ever since junior high, says his wife of nearly 46 years, Ricki. She met her husband when she was 15 and he was a year older:

“He dropped French class and got into my study hall. I just stalked him because I liked how he looked.”

Eventually, Jay showed Ricki his darkroom, where the high school sweethearts found more to do than develop photos. These days, Ricki is still at her husband’s side, encouraging his artistic endeavors.

In honor of Valentine’s Day, we are featuring three local artists and the spouses who support their creativity. Ricki’s specialty is sales. Her husband sculpts fine silver jewelry pieces which are stunning to gaze upon. But it’s Ricki who enthusiastically engages interested browsers who stop by the J. Andrew Designs booth during art festivals. 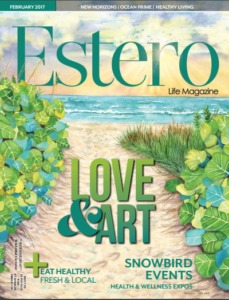 “He designs the silver to reflect the facets of the stones,” she tells a visitor, explaining how Jay lately has been stringing pendants onto strands of freshwater pearls. Like the nature-made pearls, each jewelry piece Jay sculpts is unique. He makes molds out of collected seashells for some. Others he hammers or tumbles to add texture.

The artist’s background is in large-scale metal sculpture. He turned to jewelry several years ago, following a van accident while Jay and Ricki were on their way to an art show in Fort Lauderdale. Due to the weight of the sculptures they were transporting, the vehicle overturned, and all of Jay’s artistic inventory was damaged.

The Lensinks, who are part-time Bella Terra residents, considered quitting. But a year later, Jay reinvented himself as a sculptor of fine silver jewelry, which he says is surprisingly more difficult than large sculpture.

This couple, who has been “going steady for 50 years,” as Ricki likes to put it, continues to travel to art shows nearly every weekend — in Florida throughout the winter and in the Midwest during summer months. This month, J. Andrew Designs will be exhibiting at the 11th Annual Coconut Point Art Festival.

“I don’t think we’re ever going to quit,” says Ricki, who has been selling Jay’s artistic creations at art festivals for the last 20 years. “We love doing the shows and talking to people. It’s just a passion both of us share.”

Estero artist Christine Reichow also relies on her spouse to assist with art shows. While Dick works behind the scenes handling business operations, Christine gracefully greets her guests as they admire her realistic watercolors featuring birds and botanicals.

“I do the painting, and he goes from there,” Christine says of her husband of 18 years. “He makes all the reproductions, frames them and keeps all the business records. It’s something I couldn’t possibly do without him.”

In fact, it was Dick who encouraged Christine to pursue fine art as a career, she says. Before tackling watercolors, she employed her creativity in designing “wearable art” for a women’s contemporary clothing boutique. It was Dick’s retirement that landed the couple in Napa Valley, where Christine decided to take a few art classes at a local community college.

“I settled on watercolor because it was so difficult,” recalls Christine. “I really became obsessed with the challenge and practiced every day.”

Christine Reichow now holds signature membership in the American Watercolor Society and the National Watercolor Society; her work is showcased locally at Audubon’s Corkscrew Swamp Sanctuary. Last month, she participated in the Bonita Springs National Art Festival, and this month, she will be exhibiting along the riverfront at Art Fest Fort Myers, which happens the first weekend of February. Dick will, of course, be working alongside her to help with set up and sales.

Debbie Hummel-Marconi also brings her husband, Mario, to all her shows. You might recognize him as the guy who stands between you and your camera if you try to take a photo of Debbie’s colorful creations. He’s not only the protector of his wife’s iconic brand of whimsy, but Mario also processes all the orders made on the Hummel-Marconi website.

“He’s my everything,” Debbie says, ending a long but rewarding day at the Coconut Point Art Festival on New Year’s weekend. “He got me into this.”

The couple does about 13 shows in Florida each year, and last summer, they also took Debbie’s paintings on the road to Washington, D.C. She creates fun showpieces which often feature the faces of Marilyn Monroe, Donald Trump and numerous other celebrities amongst a crowd. Additionally, she frequently personalizes orders, adding friends and family members to a colorful beach, golf or restaurant scene. Her largest painting is 12-foot-long piece titled “Are We There Yet?” featuring the typography and history of the western, central and eastern United States. It took eight months to complete and hangs in her Bonita Springs home studio (she sells reproductions on canvas). This month, Hummel-Marconi will be back at Coconut Point for the Howard Alan Events juried art festival.

“We travel all over Florida doing shows,” Debbie says. “This one is nice because we get to sleep in our own beds.” Several major art festivals will be happening this month from Fort Myers to Naples. Most artists who participate do not get to sleep in their own beds. Top-selling artists at the Bonita Springs National Art Festival come from Texas, Vermont, Wyoming and the East Coast of Florida.

Each local art fest becomes a major happening, drawing crowds of up to 20,000 over the two days it runs. For visitors, art festivals offer a unique opportunity to view many genres of artwork outside of the museum or gallery setting. For the artists, it’s a chance to interact with potential clients and has their work admired.

“I have the best job!” concludes Hummel-Marconi.