Have you taken a look in your mirror lately? You know, that shiny, flat, glass thingy hanging over your bathroom sink that greets you every morning with a sigh? Be honest, aren’t there things you’d like to change…but this nagging little voice keeps saying, “Oh forget it. At your age who cares?” Now that’s sad! At any age you can look your best — whatever that is for you.

I’ve noticed a lot of commercials lately for geezer stuff. You know, the salve that doesn’t smell like rotten eggs or prescription drugs that will clear up anything that’s screwing with your innards. Well how about your outards? (I just made that word up. I do that often.) While you’re taking care of what’s going on inside your body, and rightfully so, let’s take a look at your “outards.” And yes, I’m talking to you men as well. While beautiful Southwest Florida is a relaxing tropical paradise, that doesn’t mean you should go out looking shabby. (I’ve heard the term “shabby chic,” but I confess I never did quite understand it.) 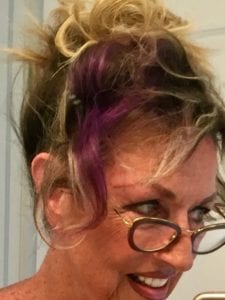 One commercial that really did pique my interest was the one where two 50-something women approach a drugstore counter behind a young woman with a purple streak in her hair. They look at each other, and in the next scene, they’re both dancing, sporting purple streaks. Well, why not? Are we to be enslaved by the dictates of some cabal of judges who make up the rules for what we can and cannot do or wear after a certain age? Well I say, “pffaw!”

Men: Ah, how I love that there are virtually few dressing rules for you! That’s a good thing. But caring about how you look to others and yourself I think is a worthy goal.

I had a friend once say to me, “LJ, don’t you think you’re a little old to wear that flower in your hair?” Huh? No! And by the way, “no” is a full declarative sentence that needs no further explanation. But I was truly struck by her judgy comment. She went on to pontificate about all the articles she’s read on fashion and makeup rules for those in their 30s, 50s, 70s…pick a decade. Yeah, I’ve read those, too, mostly in magazines selling this idea of cubby-holing us into unsubstantiated categories. So a hemline above the knee at age 50 is not OK? Who says? Hey, if you want to show a leg or two, do so; if you don’t, then don’t. Pretty simple. You should be the one to decide. 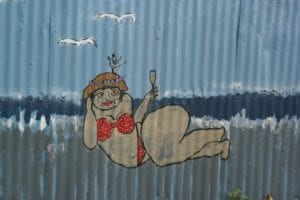 Culturally, we are hardwired to judge how we and others dress. In Europe, older women go to the beach in bikinis, unconcerned that their bellies may hide most of their swimsuits, or that their skin — crêpe-laden on their legs and arms — may vibrate with every move. Here we say, “cover up.” I say, open up that beach robe and show the world you’ve earned every one of those wrinkles and pounds! But in the end, let your style be your choice.

Oh, by the way, I am now a “purple streaked” woman. Don’t judge me. Some fashion “rules” are just meant to be broken!

About the columnist: LJ Bury is a resident of Copperleaf at The Brooks with a diverse background including stints as creator/editor of a fine arts magazine, a political blogger, a real estate agent, and a producer/talent coordinator for an entertainment company. LJ’s Corner tells the stories of everyday life, with all its joys, frustrations and ponders, including “what’s happening,” “what’s hot (or not)” and “what’s just plain quirky!”

PONDER TO BLOW YOUR MIND

(For you to start a conversation…you know, that concept soon to be extinct!)

“Is it be possible for humans to create something completely new based on nothing that previously existed? Or is human creativity just rearranging and building on previous ideas?”