We’ve all observed—and judged—others at one time or other… some funny, some awkward and some downright “beam me up, Scotty.” Who are we to judge? And yet we do.

There’s a clear difference between judging and observing—well, that’s my rationalization. I love people watching. Not just for what they are wearing but what their lives may be like…

For example: Here comes “Harry” midday on a Monday. Observe… medium height and build, perfectly slicked back hair, beige pants, white long-sleeve shirt, navy blue blazer, mirror-shined, tasseled loafers and a stuffed modern messenger bag perfectly fitted cross-body. Judgment: Clearly suffering from OCD. One step in his direction and he will back up for fear of a floating dust bunny…but he has shined shoes (more on that later). And what the heck is in that oversized bag? Men used to carry briefcases; now they look like the local newspaper boy or early American postman. (Hey, I did say judgy here!)

But wait! Crossing the street now in apparent slow-mo comes a woman dressed entirely in black—right down to her high heels. Observe…attractive in a gothic garb way, long black hair under a dated tam beret, short skirt, black tights and stilettos. Judgment: where’s the rolling sarcophagus, missy? Slow moving as her mile-high ankle killers tip her awkwardly from side to side…uh oh…traffic backing up, horns blare, and with one gracefully raised arm, she flips them off. Well, I didn’t see that coming!

I think we judge based on our own experiences. My father was what they called a man’s man—tall, handsome and always impeccably dressed. If a man didn’t have shined shoes (there it is), he would tell me, trust that his life is as disheveled. I wonder what he would think today with all the canvas sneakers and flip-flops. My stay-at-home mom thought similarly. She would clean the house, cook and run errands all day, but everything stopped at 3 p.m. when she got herself dressed up, Donna Reed style, with seamed stockings and high heels. Why? “Well, your dad works in an office with attractive women,” she explained, “and I never want him to come home to a slovaflicka.” (My dad’s made-up word for slob!)

A thumbnail sketch of those who have influenced my “observations” include a cousin who believed two things date a person—hairstyle and shoes; an uncle who was a butcher believed the meat you serve company tells you all you need to know about a person; a neighbor who pontificated about cars—the older the car, the poorer the owner (he worked for a Buick dealer); my grandmother who looked at windows to see if the blinds or shades were all evenly drawn—a microcosm into order inside the homes.

“You can learn a great deal about someone by checking their shopping cart in the grocery store,” my other Nonna used to say. “Look—beer, chips and pretzels. Oh yes, this guy is single.” Or “gallons of milk, eggs, baby food and five bottles of aspirin—a mother at her wit’s end.” These are, of course, banal and fodder for gossip. But they stick with us nonetheless.

I recently realized that over the years, my family full of “observers” (ahem) has subconsciously influenced me. I find myself looking at men’s shoes, spying grocery carts, checking windows and not dressing like a slovaflicka.

Well…here’s my transportation, and guess who’s in the next seat? Yup, OCD guy. We chitchatted about mundane things until he told me he’s an administrator for “kids at risk” centers. His bag carried their files. He was one of those kids until a former administrator gave him an opportunity, and now he’s giving back. Oops.

Goth sarcophagus lady, I was later told, was going to an audition when her car broke down and she ended up walking, hence her painful feet. Oops again! 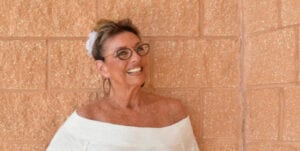 About the columnist: LJ Bury is a resident of Copperleaf at The Brooks with a diverse background including stints as creator/editor of a fine arts magazine, a political blogger and a talent coordinator. LJ’s Corner tells the stories of everyday life, with all its joys, frustrations and ponders.

PONDER TO BLOW YOUR MIND

Does knowledge have intrinsic value, or does it need to have a practical use to have value?