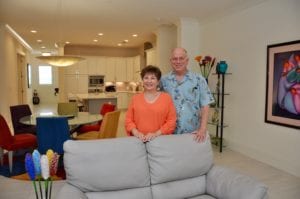 The Genova condo community on Via Coconut Point made local history as the first development to traverse through Estero’s zoning and planning process after the Village’s incorporation. Now, as owners begin to settle into their upscale, Mediterranean-style condos, they are making history as the first residents of Estero’s designated Village Center.

Fulfillment of the vision for a Village Center may still be years down the road, but the completion of Genova’s 36-unit Building A is the start. These new Village Center residents don’t yet live in a “walkable” community; they will still need to drive to find services, activities and other lifestyle needs. But the plan is for Genova one day to be at the center of activity with connectivity to businesses, a civic center, green space and a regional recreational trail along the railroad tracks which run through the heart of Estero.

In June 2016, the Village of Estero adopted special development standards for about 500 acres running along U.S. 41, mainly to the east, from north of Corkscrew Road to south of Coconut Road. The plan calls for mixed use development, which blends residential, commercial, cultural and institutional uses into an integrated community that’s pedestrian friendly. Genova is on the Village Center’s north end, while Lee Health’s new Coconut Point health and wellness campus (set to open in December) anchors the Village Center’s south end. In between, there’s plenty of room for developments to fill the gaps along Via Coconut Point.

Two hotels, Coconut Square Hotel and Hilton Gardens Hotel, are currently making their way through Estero’s zoning and planning process and will join the recently opened TownPlace Suites in Village Center. There’s also an apartment complex planned at the southeast corner of Via Coconut Point and Williams Road. Edera is proposing to build 180 units with a pocket park, onsite bike sharing and trolley service to Coconut Point. Directly north of Genova, at the northeast corner of Corkscrew Road and Sandy Lane, a three-story continuing care retirement community called The Colonnade has been approved and is making its way through Estero’s design review process.

Paul and Lucy Denett were aware of none of this when they signed on as owners at Genova. Eventually, the community will include six, colorful, four-story buildings. The community’s two pools (an Olympic lap pool and a beach-edge, resort pool), fitness center, bocce courts and clubhouse are scheduled to be completed by the end of 2018.

“I’ve been looking at condos for five years,” says Paul, who’s happy to leave landscaping and building maintenance to someone else. “I had to coax her,” he says, pointing to his wife. The couple moved a short distance from a single family home in Emerson Square, located along U.S. 41 south of Alico Road.

With architecture “inspired by the Italian Riviera,” Genova felt inviting to Lucy, whose family immigrated from Italy to New Jersey when she was seven; she still speaks Italian.

“We like the layout of the condo even better than our home — and we really loved our home,” Lucy says of her new environment. The condo has an open, spacious feel with plenty of window light streaming in from the balcony, which overlooks the community’s central atrium. “It’s very comfortable, light and bright. I just feel content and happy here. I think we’re going to have a great community.”

A Genova walking club has already formed, taking daily strolls around the atrium and walking to nearby Estero Community Park. And a poker club is sure to be forming soon, as about half of Building A’s owners have expressed interest, adds Paul enthusiastically.

The Denetts are encouraging their former neighbors from Emerson Square and their friends at Our Lady of Light Catholic Community to come join them at Genova. Buildings B and C are currently under construction, and the fourth building is nearly sold out.

“Our friends are going to line up for buildings five and six,” says Paul.

The mastermind behind Genova is Jim Wallace, who also developed Lighthouse Bay at The Brooks and Rapallo at Coconut Point. He once had plans to build an arts district in central Estero including a 506-seat theater. The Great Recession extinguished that vision, but he still hopes for something similar to spring up on the vacant land along Via Coconut Point.

“It would be nice if it gets done,” Wallace muses. “It would really put Estero on the map.”

Today, Estero Village Center is just beginning to take shape. The Denetts and their new neighbors at Genova are eagerly anticipating future destinations to walk or bike to for recreation, shopping, services and entertainment.