Carol Howell found her calling through caring for her mother 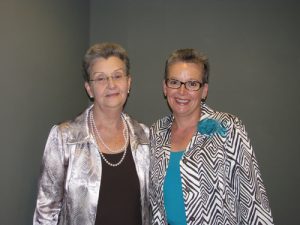 Estero resident Carol Howell didn’t intend to become an author, but the neurodegenerative illness of her mother—and grandmother before her—propelled Howell in that direction. When she lost her momma on May 31, 2019, she lost her best friend. And truth be told, she had been gradually losing her for years.

Alzheimer’s is a difficult diagnosis, and Howell found little information helpful to her as a caretaker.

At first, she faced immense frustration in not being able to communicate with her mom or “fix” her. Delving into research and learning as she went along, Howell ultimately understood that the best she could do for her mom was to offer her a stress-free life.

Arguing and trying to get someone with dementia to remember things correctly will only frustrate both the individual and their caregiver. So, Howell learned to simply be in the moment with her momma.

Howell’s attempts to educate herself as a caretaker eventually led to an agent, a publisher and a best-selling book in the Amazon.com caretaker category, “Let’s Talk Dementia.” It also led to a life-changing career. She was certified by the International Council of Dementia Practitioners and opened a counseling business to help those caring for loved ones with dementia. She also wrote three more books.

Caring for the one who first cared for you

“My mom was my best friend in the world,” Howell said.

In the days before cell phones and unlimited long distance plans, Howell’s husband complained about the high phone bills due to her frequent calls with her mom.

“I told him I needed a bigger phone budget,” Howell said.

When her mother started declining cognitively, Howell devoted herself to learning everything she could about dementia and specifically Alzheimer’s—to help her best friend face life changes. A devoted student, Howell often shared her newfound knowledge with others and passed out fact sheets to those who requested information. 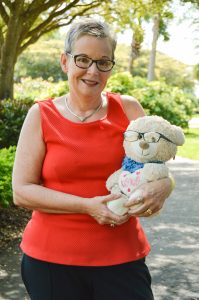 “The difference between dementia and Alzheimer’s is critical to understand,” said Howell regarding one of her early findings.

Dementia has many causes. Alzheimer’s, the illness of her grandmother and mother, is one of them.

Howell said her research indicated that the most important aspect of

communication was to give comfort and kindness to the ill person and accept their level of reality as real to them rather than worry them with remembering what their brain cannot connect, which often causes stress.

“So often when I was at the assisted living facility with Mom, I would hear other visitors repeating to their loved ones all the details they wanted to help them remember,” said Howell.

In contrast, Howell’s goal became making her mother’s life like “a teacup ride at Disneyland” – worry and stress free.

An example of Howell’s combined common sense and humor is a story she tells about driving with her mom, who was growing increasingly frustrated as she struggled with her cell phone. Finally, Howell pulled the car off the road by a wooded area.

“I told Mom to take the phone and throw it as far as she could, which she did, and I asked her how it felt,” Howell recalled. ‘“Great!’ Mom responded and added, ‘What else can I throw?”’

Called to encourage and empower caregivers

Originally from upstate South Carolina, Howell’s voice still carries a slight accent as she fires off information quickly and in lay language with the dash of humor and faith that’s typical of her counseling and writing.

She and her husband worked together in their non-profit counseling business before moving to Florida two years ago. After moving, he was ready to pursue a new career direction, and Howell continued her “Let’s Talk Dementia” business, typically providing caregiver counseling for free.

“Many caregivers gave up their paying work…helping them is a calling for me – a ministry,” Howell said.

Donations are welcome, but if someone can’t afford to buy her books, Howell will give them the resources they need.

Many people from Estero and elsewhere have found Howell’s books helpful.

“When my husband’s mom was diagnosed recently, we were lucky to find Carol, a person so passionate and knowledgeable who helped us find a memory care placement and also helped with the emotions and care-taking planning that goes along with a dementia diagnosis of a loved one,” shared Ovieda Elliott.

Estero resident Theresa Long provided care at home for her mother-in-law, whose diagnosis came slowly. Long labeled drawers and helped her manage tasks in new ways until professional care in a safe environment was required.

“‘Let’s Talk Dementia’ would be very helpful to professional and trained caretakers in a memory care or assisted living facility,” Long said. “For a family member care-taking at home 24/7 for years, it’s human nature to share common experiences and remembering together.”

Long found the distant past easier to share to meet the “stress-free” goal.

“I met Carol and received her book, ‘Let’s Talk Dementia,’ as a gift when my mother was diagnosed with Alzheimer’s,” she said. “‘Let’s Talk Dementia’ was beneficial in understanding Alzheimer’s and how to feel about it – don’t let it bring you down, be positive – even if the next day is a repeat of the day before.”

She sent copies to family members, too. 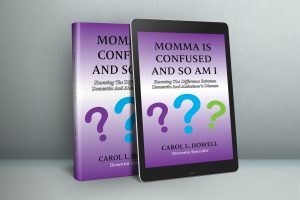 Momma is Confused and So Am I

Howell is currently working on “Let’s Talk Dementia Part II” which focuses on caregivers taking care of themselves. Howell shares tips for maintaining emotional, spiritual and physical health, including, “Find a physical place to escape and cry or grieve to release the feelings.”

Howell had a certain rock in a local park that she often sat on and a swing-set nearby for swinging.

On Valentine’s Day 2019, about three months before her mother’s passing, Howell gave her momma a teddy bear.

“Starting the month of May, she held the bear as tightly as she could. We had to lift her fingers, one by one, to remove the bear to change her clothes,” recalled her devoted daughter and best friend. “When she passed on May 29th, she was still holding the bear.”

“It brings me great comfort,” she said 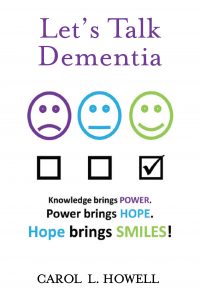 2. Don’t argue with a person with dementia. Their brain is not working the same. Period.

3. Absolute honesty is not the best policy. The use of therapeutic fibbing is often kinder.*

4. When not understanding the words of a dementia person, don’t blame — let it go.

* Therapeutic fibbing may be a little controversial, but it’s similar to asking a husband if a pair of jeans makes the rear look fat and his responding that you always look good to him in jeans. Similarly, withholding some details of a loved one’s illness can be a kindness to alleviate stress and worry, Howell says.