That’s right, this month the Village of Estero will be celebrating the fifth anniversary of its incorporation! As an in-kind sponsor, Estero Life Magazine would like to invite everyone out to our community park on Saturday, March 21, from 11:30 a.m. to 2:30 p.m. for a grand celebration with food trucks, children’s games and a FREE outdoor concert featuring the musical talents of Estero’s own Billy Dean & Dawn. Check out details on page 13. Fun for the entire family! 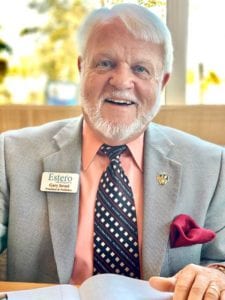 We have many reasons to celebrate here in our bustling community. As you read in our January 2020 issue, the spirit of collaboration is evident throughout the village. Capital improvements to Estero Parkway, the I-75 interchange and East Corkscrew Road are showing initial signs of real action! And, have you taken time to notice the new landscaping on the full length of U.S. 41 through our city? This year is going to be very exciting.

Shortly after being named Estero’s first mayor, Nick Batos started a fundraising event to support and elevate offerings at Estero High School. As a “thank you” to all of you who have sponsored, attended, contributed to or donated at “Evening Under the Shadow Wood” these past four years, our “Out of the Shadows” feature article will give you an idea of the impact it continues to have for Estero High School, the students, teachers and our community. You will be amazed and so proud…truly making a difference!

I can remember as a high school student in the late ’60s having the privilege of traveling with other Spanish students to Spain. One of the most interesting things we experienced, right in the middle of the capital, Madrid, was an oddity: “The American Drug Store.” People came from afar to see something so different from their own culture.

Today, the American drug store has become an oddity even in the U.S. as chains like CVS and Walgreens, as well as grocery stores and big box stores like Walmart, have pharmacy counters. But recently, right here in our own Village of Estero, the clock has been turned back more than a half-century. PharmacyGO is a boutique pharmacy offering personalized service, the modern take on the “corner drugstore.” Tucked away in the plaza at the southeast corner of Estero Parkway and U.S. 41, this is one of the most interesting recent discoveries.

From a boutique pharmacy, we take you to a boutique hotel and its new restaurant: The Olde Florida Chop House at the Trianon Bonita Bay, just south of the Promenade shops. I have known proprietors Darren and Stacy Robertshaw for 20 years and admire their conviction to address even the smallest of details. When I heard they had opened a new restaurant on the premises of their beautifully appointed hotel, I just had to try it out. From the “smoked” Manhattans and Rob Roys to the Tomahawk Pork Chop and the chocolate mousse cake, everything was orchestrated to perfection. Read more in our dining feature on The Olde Florida Chop House and consider booking for your next special occasion!

To complete our theme of celebrating, we give a shout out to Estero resident and accomplished trumpeter Jim Doepke for achieving his unique personal goal of performing the “Star Spangled Banner” at every Major League Baseball park in the country. Our national anthem is more than just another song. The history and depth of meaning behind it makes performing it a true honor for those of us who understand, and I take it very seriously. So does Jim Doepke, subject of this month’s “7 Questions.”

As always, check out what’s happening this month in our Best Bets and enjoy the Scene on Site photos, along with a stunning Village Life spread!

Until next month, remember to…