If you’ve ever mused about the secrets to longevity, take a note from Mildred Lewis. She celebrated her 109th birthday on Christmas Day and attributes her enduring health to “just doing what I think is right.”

Her son, Tom Lewis, will tell you it’s in the genes.

“There’s been several people in my mother’s family who lived to be over 100,” he said, adding, “only the ones who didn’t drink or smoke.”

While Mildred may have shunned addictive habits, she’s always liked fried foods. When asked about her diet, Mildred said, “I wonder what people will think when they see I lived this long on fried potatoes.” 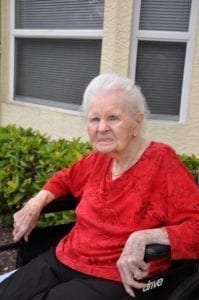 To honor Estero’s oldest living resident, Mayor Nick Batos presented Mildred with a golden Key to the Village of Estero. She received the accolade at Light Up Estero, receiving an escort from Estero firefighters.

Tom Lewis said his mother never expected such attention — although she likes it.

“She’s something else,” he says of his spirited mother whose physical condition does not match her wit. “She drove up until her late 90s.”

Although Mildred is now in a wheelchair, she remains optimistic in nature: “I broke my leg in four places, but I’m getting along just fine,” she says.

“That’s one thing you can say about mother,” Tom adds. “Things are always going to get better.”

Mildred now lives with her daughter, Roseann, in the Breckenridge community. She moved from Missouri about 10 years ago, shortly before her 100th birthday.

She was born on Dec. 25, 1907, the second eldest of eight children, and lived most of her life in Ozarks Mountain country.

“It was wonderful,” she says. “It was just like heaven.”

Mildred spent her formative years in Old Linn Creek, which now lies beneath the Lake of the Ozarks. The town was flooded with the building of the Bagnell Dam around the time Mildred married Earl Lewis in 1930. The newlyweds settled in nearby Camdenton, a brand new community where many Linn Creek residents relocated. Theirs was among the first homes built in what is now called the “Hub City of the Ozarks.”

“They had a new, modern bungalow, which was one of the rages in the 1930s,” Tom recalls. 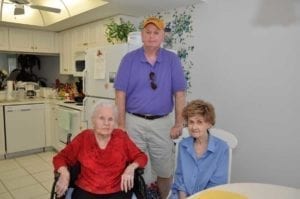 Unlike most young women of her era, Mildred attended college, first at a girls’ school in Fulton, Mo., then transferring to Southwest Missouri State College (now Missouri State University). After three years, her father told her it was time to get a job, so she began her teaching career in a one-room schoolhouse.

Mildred regretted not finishing her education, so this dauntless woman decided to attend Lincoln University, a historically black institution, where she earned her bachelor’s degree. Mildred went on to teach for 25 years, mostly in fifth grade with Jefferson City Public Schools.

“I think teaching is the only profession,” declares Mildred. “There’s something new happening every day.”

Mildred was a member of the Order of the Eastern Star, achieving “worthy matron” status. She also was active in her church and loved to play bridge, says Tom.

Mildred hated to leave the Ozarks, but her two children insisted she move closer to them in Florida as she approached the century mark. Motioning to daughter Roseann, she jokes, “That’s my mother over there.”

Although Mildred is hard of hearing, she remains sound of mind, witty and stubborn: “I tried for 20 years to get her in a hearing aid, and I just gave up,” says Tom.

The one thing that gets her down is thinking about all the friends and family members who have passed on, many of them having been gone for decades now. Her husband died in 1993. Her youngest brother, who was 14 years her junior, died last year. 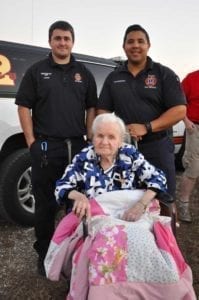 “It’s been hard losing them,” Mildred says. “I lost everybody. My father, my mother, all my sisters and all my brothers. I’m the only one living.”

Mildred has two grandchildren and one great-grandchild now. She was honored, albeit a bit overwhelmed, to receive so much attention for her 109th birthday.

“We never expected anything,” says Tom.

Estero Councilwoman Katy Errington orchestrated an official proclamation and ensured Mildred would have transportation to Light Up Estero to receive the Key to the Village.

At age 109, Mildred is less than two years apart from the Florida record-holder, Isabel Castano Restepo, who turns 111 this month. New Jersey resident Adele Dunlap, born in December 1902, is the oldest American at age 113, according to the Gerontology Research Group, an organization which tracks supercentenarians.

Mildred Lewis is the oldest known resident of Lee County.

“It was a privilege to present the key of our young city to the most mature resident of Estero,” said Mayor Batos.