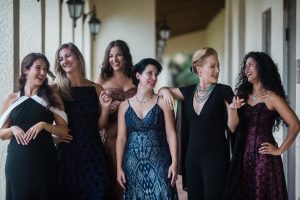 The Gulfshore Opera was birthed the same year as the Village of Estero. It’s only fitting these two young and growing institutions—both about 7 years old now—would call the same community home.

With multiple operatic performances each month, Southwest Florida is coming of age in the pageantry and vocals that are enjoyed by opera patrons across the globe.

As an introduction and gift to the opera’s new community, the GO Divas – Gulfshore Opera’s popular women’s vocal ensemble – will offer a free concert in Estero Park on Nov. 14. The Divas appeal to diverse audiences with their fun and friendly vocal harmonies from opera scenes and popular music.

Estero residents may recognize neighbors who either work at the new office or will be seen in concert – or both. Estero resident Maria Talley is a member of GO Divas and is Gulfshore Opera’s production operations assistant, working with performers and production staff to arrange travel and accommodations and coordinating rehearsal schedules.

Landhuis has the demanding task of set design for touring performances. Often elaborate sets need to be rapidly torn down after each show and reset at the next venue. 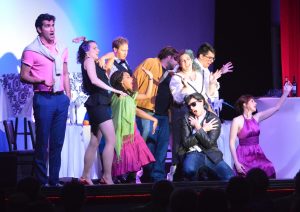 “The stage design sets the time and place for the slice of life performed on stage by the vocalists,” explained Landhuis. “While early rehearsals may be in street clothes on an empty stage, the costumes and sets tell the rest of the story to the audience.”

Landhuis’ musical education and opera experience includes acting, singing and design. If pressed, he may admit to preferring performance, but he’s equally excited about meeting the challenges of technical design.

On the horizon is a touring performance of “The Bat’s Revenge” at Estero High School (along with venues in Port Charlotte and Naples). Originally in German but performing in English and updated to the 1930s, this will be Estero’s first opera on Feb. 22, 2022 – a precursor to the future.

The season’s grand performance of “Tosca” by Puccini will also travel through the three counties and will be accomplished in partnership with the Naples Philharmonic Orchestra.

Pearce purposefully keeps ticket prices affordable so performances may be on everyone’s entertainment list, whether catching an al fresco concert by GO Divas or a full-scale stage production like “Tosca.” 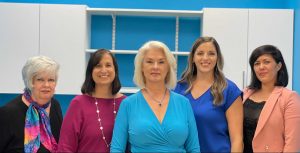 Pre-event lectures and opera review will now be possible at the new headquarters on Corkscrew Road for those not familiar with an opera’s storyline or music.

“Education is a major component of Gulfshore Opera,” Pearce said. That includes community engagement efforts, support of emerging artists and partnerships with elementary schools to highlight and develop local talent.

Pearce recalls her own uncertainties about her voice as a child. Surrounded by a musical family, she sang out loud and high until one day, “my elementary school teacher told me to stand at the back.” At first, she thought she was being punished until she was told the reason: “because with my loud and high voice, no one else would be heard.”

A producer, director, performer and teacher in the field of opera, Pearce’s international singing credits include Opera Marseille, Opera Lisbon, The Opera Company of Philadelphia and performances at Carnegie Hall, Lincoln Center, the Kennedy Center and the Dorothy Chandler Pavilion. During a break from touring while visiting Naples, a defining moment occurred when she realized she could stop touring – and start an opera company.

What began as Naples Opera progressed through rapid growth and a name change to Gulfshore Opera to reflect the company’s reach from Marco Island to Port Charlotte.

Now the opera has an official home in a former physicians office building in Estero.

“Estero has been such a welcoming community that I expect even more artistic and performance venues to come here in the future,” Pearce said.

Professional performance talent for major opera productions comes from across the globe while local talent is included in many community productions and concerts like GO Divas. Community connections also include the Harmony Choir for elementary and middle school children and the Emerging Artists program.

Volunteer opportunities are plentiful with volunteers enjoying not only camaraderie but free viewings of the performances at which they serve. 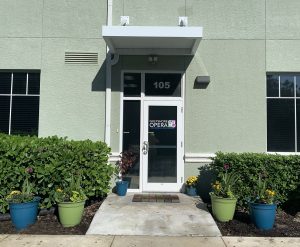 Local residents are just becoming aware of their good fortune. “I am glad to see more cultural events coming to Estero,” said Marcia Taylor, who moved to the area to teach at Florida Gulf Coast University and looks forward to Estero’s growth in the arts.

Claudia Polzin, Gulfshore Opera’s marketing and development liaison, spent years working with the Naples Philharmonic building a network in the Estero area including Coconut Point Mall and Miromar Outlets, which she will continue to strengthen as a member of the Gulfshore Opera team.

“The Estero community has welcomed us as members of the community, offering collaboration and support,” she said. “We also strive to incorporate local businesses in our growth for services like plumbing and printing. We seek a symbiotic relationship working together to build on the hometown feeling that is Estero Village.”

“We want the community to stop in and visit and get to know us,” she said. Westley admits to being the only member of the administrative team who does not sing. “Someone has to keep their focus on everything else,” she said, laughing.

Just as Pearce has developed a thriving community opera company, she is developing – and decorating – the new headquarters to become a community asset.

“Everyone involved with Gulfshore Opera is looking forward to a wonderful eighth season as we grow along with our new hometown,” she said.

“The Bat’s Revenge” at Estero High School on Feb. 26, 2022, at 7 p.m. This new original production set in the Golden Age of Hollywood takes its inspiration from the ever popular Viennese comic light opera “Die Fledermaus.”

Gulfshore Opera Gala, the organization’s signature fundraising event, will be March 6, 2022. Concert will be at First Presbyterian Church in Bonita Springs at 4 p.m., followed by the Gala Dinner at the Bonita Bay Club Ballroom at 5:30 pm.

“Tosca” by Puccini at Barbara Mann Performing Arts Center on April 26 and Artis-Naples on April 29.

Get detailed information on performances, buy tickets and view a full calendar of upcoming events on the Gulfshore Opera website.