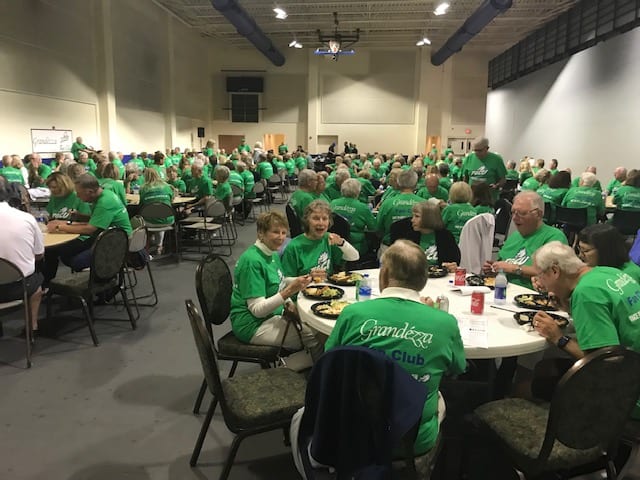 For the 7th straight year, the “Grandezza Fan Club” headed to Alico arena for a night of fun and excitement with The Lady Eagles Basketball team. A record 285 Grandezza fans, all wearing their “Grandezza Fan Club” green shirts, were treated to a fabulous Italian dinner served up by Carrabba’s before watching the Eagles continue their dominance in the Atlantic Sun Conference by beating NJIT 61-42 for their 20th win. Their win was despite the absence of two starters (Destiny Washington and Keri Jewett-Giles) and a 3-for-33 performance from 3-point range.

During dinner, our Grandezza Fans were welcomed by some of the cheerleaders, Azul the team mascot and a brief pre-game scouting report/chalk talk by Athletic Director Ken Kavanaugh and Coach Karl Smesko. A check for $9,380 was presented by Al Meyer to AD Kavanaugh, which after expenses, about $2,800 will be donated to the Athletic Department. Both speakers expressed how much they appreciated the support given to FGCU Athletics by our fans from Grandezza. Coach Smesko, a longtime Oakwood resident, attributes much of the success of the basketball programs to the continued support of his friends and neighbors in Grandezza and the surrounding communities. 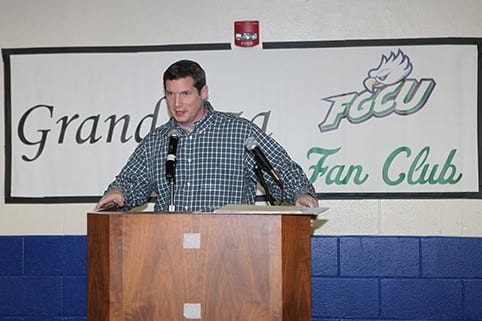 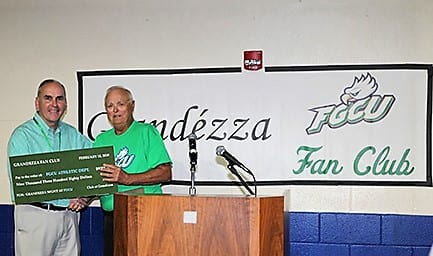 After losing nine players to graduation last year, it was supposed to be a rebuilding year for Coach Smesko. It was…but rebuilding to Karl Smesko means something different. First, you go out and recruit new players who can fit right in by sinking 3 pointers from every spot on the floor, play incredibly aggressive defense and literally take wing where the former Eagles once soared and scored. Karl never shies away from a tough preseason schedule, and this year it was Duke, Stanford, South Dakota State, and Alabama Birmingham that clipped their wings early. What do you do next after these early season setbacks and lessons? You run the table in the ASUN Conference and win 20 straight. It’s known around these parts as “The FGCU Way.” The Eagles are currently ranked 3rd in the nation among the 220 Division l mid-major universities behind number 1 Gonzaga and South Dakota.

Many records were set again this year starting with our 285 fans. This was the largest single crowd to ever attend a Grandezza event (at the Club or away from the Club). FGCU Women’s Basketball records were also adding up again. This win marked the 15th straight year of 20 or more wins and put them well on the way to nine straight 25-plus wins in a season. For Coach Smesko, this was win number 516 and keeps him among the top four coaches in Division I college basketball alongside UConn’s Geno Auriemaa, Kim Mulkey of Baylor and Tara VanDerveer of Stanford. Karl is an 8-time ASUN Coach of the year and is a lock to win number 9 at the end of this season. The Eagles have registered 13 straight post season tournament appearances including five trips to the NCAA in the past 7 years. All of this and we haven’t even mentioned that they’re 3rd in the nation in 3 pointers. I could go on, but you get the point…this team is just plain great year after year!! We are so lucky to have them nearby! 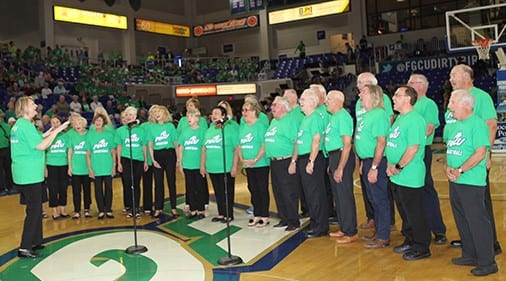 Amidst all the dinner and basketball excitement, it was a HUGE night for the “GRANDEZZA SINGERS.” This was their inaugural public appearance as they sang our National Anthem in front of 2481 enthusiastic fans. At halftime, they entertained the fans with a beautiful rendition of “God Bless America.” On March 3, they head to Hammond Stadium to perform the Anthem for the Minnesota Twins and Philadelphia Phillies fans. The 30 singers are led by Savona resident Ursula Kingsbury. Their mission is first and foremost to have fun, create entertainment and continue their musical journey wherever it has been. We would love to have more singers; so, if you would like to join this prestigious fun-loving group, please contact Darlene Polyschuk or Al Meyer and they will be more than happy to sign you up. 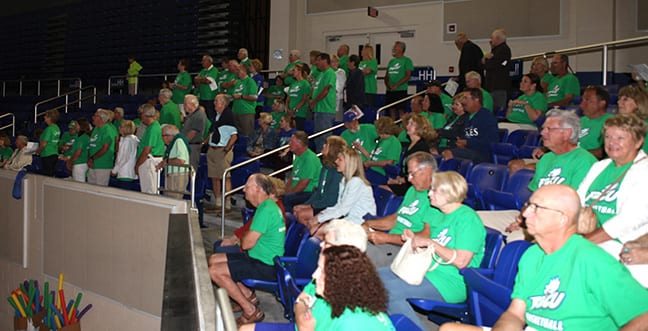