Jim Wallace is constantly sketching. The longtime Southwest Florida developer keeps a notepad handy for the ideas continually sprouting in his mind.

It takes business savvy to know what is salable in a given market and creativity to develop a concept which will fit into a community’s vision. Wallace has proven successful in both deciphering buyers’ desires and collaborating with local governments to create high quality residential communities for nearly three decades in Southwest Florida. 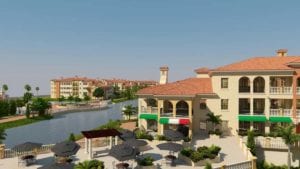 He entered the Estero market in 2000 with Lighthouse Bay at The Brooks, then proceeded to build Rapallo at Coconut Point in 2005. His newest venture, Genova, is taking shape at the southeast corner of Corkscrew Road and Via Coconut Point. This 205-unit, luxury condominium community is the first development to break ground in the newly designated “Village Center” since Estero’s incorporation.

“Genova is a high-quality and sustainable development that helps further the Village Center plan by providing residential use with high architectural standards, a linear park area along Corkscrew Road, attractive vistas and seating areas along Via Coconut that are pedestrian friendly,” reports Estero Community Development Director Mary Gibbs.

Genova also is landscaping the Via Coconut median and is contributing $100,000 toward a future second entrance to Estero Community Park.

“The park is a central focus of the Village Center, so this is an important component,” adds Gibbs.

Wallace calls Genova a “hybrid” because it merges the most desired features of the single-family home lifestyle with the amenities and low-maintenance of condominium living. 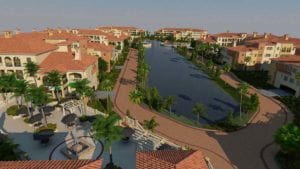 Wallace, noting that so far, more than half of Genova’s buyers are full-time residents, compared with a quarter of Lighthouse Bay and Rapallo residents. “Most Genova buyers are downsizing from upscale villas and single-family homes in local golf course communities like Shadow Wood, Bonita Bay, West Bay, Pelican Landing and Belle Lago. We have people moving from $2 million homes.”

Downsizing on living space, however, does not mean downsizing on lifestyle. These luxe condos, which range in price from the $280s to $560s, feature flexible floor plans, gourmet kitchens with stainless steel appliances and high-quality cabinetry throughout. Each home has its own two-car garage on the first of four levels. Fourth-floor master bedrooms offer sweeping views of the Italian-inspired architecture, a lake and a lush central atrium. Shared amenities include a resort-lifestyle club with a staffed fitness center, zero-degree entry pool and an indoor lap pool. 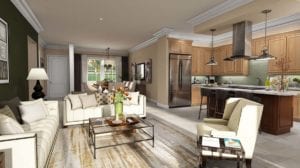 Notably missing from Genova, however, are tennis courts and a golf course. Statistics show a dramatic decline in the number of golfers over the last decade. Just 17 percent of people over age 50 play golf and 5 percent play tennis regularly, Wallace notes. The majority of retirees aren’t interested in those amenities and don’t want to pay the high monthly fees associated with golf communities, he says.

Genova’s homeowners’ fees will be about $500 a month and include structural insurance, water and sewer, cable, internet, landscaping maintenance, clubhouse staffing and reserves.

Many Baby Boomers, as well as Millennials, are now seeking a lower maintenance lifestyle, Wallace notes. Several buyers have told him they want a comfortable “home base” while maintaining the freedom and resources to travel.

“A lot of today’s Baby Boomers are choosing to simplify life, but they’re very active and not ready for, or excited about, assisted living,” he adds. 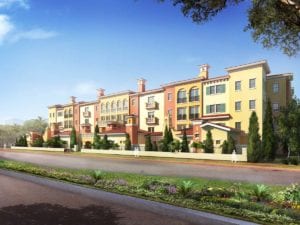 communities, security remains important to buyers. Genova will be a gated community; however, no gates will be visible. The aesthetic of openness will be maintained by what Wallace calls “stealth security,” which relies on entry lakes, the buildings themselves and fencing hidden within landscaping to keep the community secure.

Genova also deviates from the Village Center ideals of mixed use development. There currently are no retail or commercial components for this community. Nor will Genova residents be able to immediately walk to anything else in the future Village Center, aside from Estero Park. It is uncertain how long Estero North Point, a 100-acre mixed-use planned development directly north of Hertz, will remain undeveloped. Original plans approved by Lee County include multifamily housing, a hotel, retail and office space. However, North Point has not submitted any applications to the Village to update those plans.

Not surprisingly, Wallace has ideas in his head for what the Village Center could become. He helped shape Estero’s current land use plan as an eight-year member of the Estero Design Review Committee prior to the village’s incorporation. He and other local developers also contributed suggestions for the 2016 update of the Village Center plan.

“Researching, discussing, arguing and finally collaborating on the Estero Comprehensive Plan amendment was an arduous and frustrating 15 months for everyone, but now that it’s in place, I believe there will be increased development of high-density, high-quality, non-golf communities and in-fill parcels of retail and office,” he predicts.

The key to attracting high-quality development to the Village Center will be creative collaboration with reputable Southwest Florida developers, Wallace adds. Undue political influence has the potential to drive the best developers away, he warns. 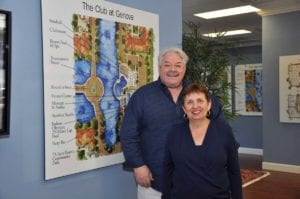 “If Estero, including its residents, truly embraces collaboration instead of confrontation, regulation and NIMBY (not-in-my-backyard) politics, the Village will flourish, developers and employers will compete to be here, property values will increase, residents will get the neighborhoods they want, and Estero will have a tangible sense of place,” Wallace asserts.

Gibbs says her staff embraces collaboration, regularly meeting with developers to help them understand how their project ideas can fit within the Village Center vision and codes.

When designing Genova, Wallace says he aimed to embrace the village’s vision while interpreting it to fit the property’s features and the market’s demands. The first of Genova’s six buildings is expected to be completed by early fall, and the club is scheduled to open in late fall.

As Wallace prepares to celebrate his 71st birthday, he certainly could think of retiring and spending more time relaxing with his wife, Debbi, on their privately owned, seven-acre island in the Thousand Islands near Ontario. But that’s not the plan.

“I’ve always said I’d retire at 75, or when I stopped having good ideas,” Wallace says. Since he’s still sketching on notepads, it’s highly unlikely Genova will be his final development in Southwest Florida.