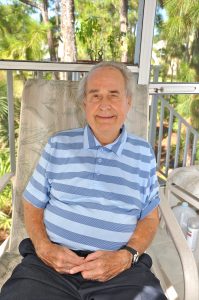 Tears came down Dottie Brown’s cheeks as she received, then embraced, a light blue-colored book from Lanell and Jim Shields entitled, “Forging a Better Path.”

Her husband, Bill Brown, is one of the key figures in this newly written history detailing the role Estero volunteers have played in helping the Village of Estero develop over the past 21 years, including the community’s effort to incorporate in 2014.

“I’m proud of what Bill did,” Dottie said, noting his longtime service with the Estero Council of Community Leaders (ECCL) as secretary – recording notes on many of the events recounted in the ECCL’s new book. He was a good listener.

“People talked about how quiet he was, and I said that was because he only had good things to say.”

A former president of the Council of State Chambers of Commerce in Washington, D.C., Bill Brown was honored by the ECCL as a Village Visionary in March 2011 – just seven months before his death. Brown’s passing became an impetus for the book.

Jim Shields, a member of the ECCL board of directors, didn’t want too many of Estero’s early visionaries to die before their contributions were acknowledged and recorded for posterity. Other notable figures in Estero’s recent history – Bob King, Arnie Rosenthal and Sam Levy – had also passed away.

Shields didn’t want the work of the citizen organizations that predated the Village’s incorporation forgotten, including efforts of the ECCL, its predecessor–the Estero Concerned Citizens Organization (ECCO)–and Vote Estero, which led the push toward Estero’s cityhood.

“This doesn’t just happen. A lot of people played a role,” Shields said.

He became adamant that an account of Estero’s history from the last two decades be recorded—and that it be accurate.

A total of 28 people were interviewed, some more than once. Follow-ups were conducted to clarify uncertainties. After that, the book received nine edits, according to Allan Bowditch, ECCL chief communications officer, who authored the book.

Without the comprehensive plan the ECCL crafted and presented to the Lee County Board of Commissioners, Estero would look “like a concrete jungle,” Bowditch said. 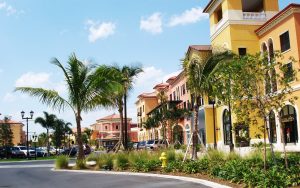 “A hodgepodge of strip malls and gas stations,” is how Joe Pavich would put it. A longtime ECCL board member and Estero real estate agent, Pavich remembers when the land where Coconut Point sits was a cow pasture.

Now it’s one of the largest open-air malls in the nation; a website called vacation-in-florida.net describes it this way: “Here, guests can enjoy their shopping trip under the South Florida sun. Instead of sterile glass and steel interiors, the Coconut Point Mall pleases the eye with elegant Mediterranean architecture, lush palm trees, fountains and an artificial lake.” It might not have been so picturesque if not for the design standards negotiated by the ECCL.

As developers became interested in building up Estero, residents had to band together to set community standards.

“When you go back to the ’90s, one time there was a bubble plan, which meant there were maybe 200 uses for a piece of property,” Pavich explained. “There never was an issue with the bubble plan until Sam Galloway Ford wanted to put a dealership on U.S. 41.”

This led to the creation of the Estero Community Plan by the ECCO, which was adopted by the Board of County Commissioners. All future development proposals would be evaluated according to the plan’s provisions for architectural and landscaping standards. And developers would be required to hold a public hearing in Estero before applying for zoning.

What’s most impressive is that prior to Estero’s incorporation in December 2014, most of the community’s procedural infrastructure work was done by volunteers who received no pay for their time and expertise. With a median age of 65, Estero’s residential population includes many talented retirees.

“No matter what issue came up, we could recruit good people in an advisory position who could help,” said Don Eslick, 87, once known as “Mr. Estero.”

Credited with doing as much for Estero as anyone to build the community, Eslick is honored in the book’s preface and has the only individual headshot. He was involved in the ECCO and was founding director of the ECCL, a group that prides itself on being a nonprofit, nonpartisan, nonpolitical civic advocacy organization.

“It was a very harmonious type of structure where the participants worked together,” Eslick said. “There were a lot of issues—a lot of involvement, a lot of cooperation that went on.”

ECCL and the groups that preceded it influenced everything from commercial architecture to land use, and they took on issues like airplane noise and mining expansion. With representation from each of Estero’s 30-plus gated communities, the ECCL was set up similar to the model of state representatives being elected from districts.

If not for the cooperative efforts of community advocates, Estero might have looked markedly different—or even be nonexistent—today.

Estero avoided being gobbled up by Bonita Springs when officials there wanted to annex the land up to Williams Road. The Bonita Springs Council didn’t negotiate with Estero leaders because they were unelected. However, Meg Judge, founding chair and CEO of the Estero Chamber of Commerce, helped convince Sen. Burt Saunders to put a moratorium on Bonita’s annexation attempts for five years.

After that period, Bonita Springs’ continued push for annexation led to Estero’s drive toward incorporation. Scotty Wood, chairman of Estero’s Planning and Zoning Board and former ECCL member said, “ECCL gave the Village a slingshot.”

Lessons from the past help guide future advocacy efforts

While some questioned whether the ECCL would continue to be needed after the Village’s incorporation, Eslick never doubted. Citizen volunteerism is what makes Estero’s philosophy of “government lite” work—and government lite keeps Estero’s taxes low. 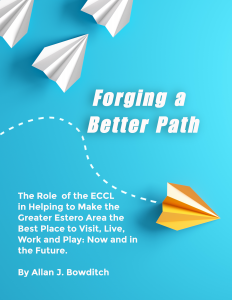 Estero has come a long way in the last two decades, and volunteers will continue contributing heavily to what the community will become.

“The time and effort given from a couple hundred people…it’s a significant group,” said ECCL Chief Operating Officer Mark Novitski. “I think it’s a showcase for other communities.”
He recognizes the book may have missed calling out some of Estero’s significant community volunteers by name, but he hasn’t had anyone tell him the book isn’t accurate.“It’s a great way to preserve information and history and recognize people,” Novitski said.

“Forging a Better Path” is available for purchase on the ECCL website at esterotoday.com/history-book