Estero’s Connection to Indiana Basketball & ’The Last Days of Knight’

As ESPN launched a new, direct-to-consumer network on April 12, the “hook” for new users to subscribe to its ESPN+ app was an exclusive documentary chronicling the events that led to the firing of legendary Indiana Basketball Coach Bob Knight in 2000. The film, part of ESPN’s acclaimed “30 for 30” series, is garnering accolades from sports reporters, film producers and sports fans across the nation.
But what does Indiana basketball have to do with Southwest Florida? Simply, “The Last Days of Knight” would not exist without the editing prowess of Bella Terra resident Andre Ninchritz, owner of DDP Productions of Estero.
During the final phase of the documentary’s production, Ninchritz spent about three months holed up in his studio at the Estero Executive Center with award-winning reporter/producer Robert Abbott, whose investigative journalism uncovered Knight’s verbal and physical abuse of players, ultimately leading to the Hall of Fame coach’s demise. 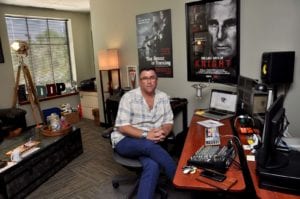 “It feels like watching Woodward and Bernstein walk you through how they toppled Nixon,” writes Zak Keefer, of The Indianapolis Star, giving his impression of “The Last Days of Knight.”
The documentary follows Abbott, then a CNN/Sports Illustrated reporter, as he tenaciously digs into his assignment to find out why top players were leaving IU.
“It’s kind of like a ball of yarn; once you start pulling it, it starts unravelling,” says Abbott.
It’s been many years since the dust has settled from this college basketball bombshell, but Abbott recently dusted off storage boxes in the basement of his Connecticut home — boxes containing his scrawled notes and an old VHS tape which mysteriously showed up in his mailbox in 2000. This was the “smoking gun,” the undeniable evidence that Bob Knight had choked player Neil Reed during practice. 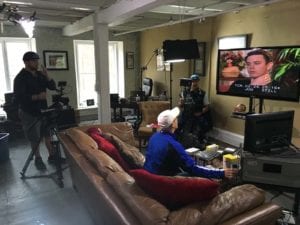 As Abbott unpacked these artifacts, Ninchritz was there to film it, finishing out the final visual elements needed to tell this remarkable story. Later, Ninchritz would sift through 26 terabytes of video (several hundred hours) in an attempt to refine the story into a powerful, two-hour documentary.
“He’s just the best,” says Abbott of his longtime friend and editor. “That’s why I came down to Estero to work with him.”
Abbott and Ninchritz each have more than 25 years of experience in television and filmmaking. Ironically, when Bob Knight was fired in 2000, Ninchritz was working for an ESPN contractor in Connecticut and was called back from vacation to put together a one-hour special. He didn’t meet Abbott until the following year while working on an ESPN SportsCentury documentary on Venus and Serena Williams.
Over the years, Abbott the “storyteller” and Ninchritz, the brilliant visual editor, would team up on numerous projects, including Emmy Award-winning documentaries for the “ESPN 25” series and ESPN’s “E:60” TV series, which Abbott co-created. 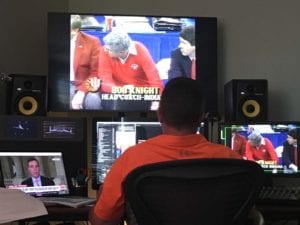 For these veteran filmmakers, the “The Last Days of Knight” was not just another sports documentary.
“It’s really a story of power and abuse of power,” says Abbott. “It’s about how bad things happen when people in power look the other way.”
As long as Knight was winning championships, no one held him accountable for his angry outbursts and outlandish behavior — until players started leaving the program and a persistent reporter started asking “why?”
“Robert is tenacious,” says Ninchritz. “The more the doors were closed, the more he wondered, ‘What’s really going on here?’”
While working on “The Last Days of Knight,” Abbott joined Ninchritz in Estero, renting a home in the Villages of Country Creek for three months. ESPN executive John Dahl also made a trip to Southwest Florida, staying at the Hyatt Regency Coconut Point Resort & Spa while overseeing final production. 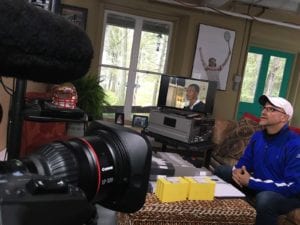 Ninchritz’s wife, Lisa, supported the effort by keeping her husband’s “man cave” studio stocked with candy and protein bars. The couple moved to Estero with their two children in 2008, right after the opening of Coconut Point Mall. They had been vacationing in Estero since the 1990s, when Ninchritz’s parents moved to Fountain Lakes.
“I immediately fell in love with this area,” says Ninchritz. “I’m not a cold weather guy.”
ESPN allowed him to work remotely, but he was on the road eight months out of the year. So, in 2014, he opened his own production studio. Through DDP Productions, Ninchritz continues to work on ESPN projects along with academic programming for the University of Texas “Longhorn Network.”
DDP also is the producer of a new, original series called “Golf Rocks,” chronicling the conversion of former rockers like Alice Cooper and Iron Maiden drummer Nicko McBain from their days of “sex, drugs and rock ’n’ roll” to now: “sex, golf and rock ’n’ roll.” 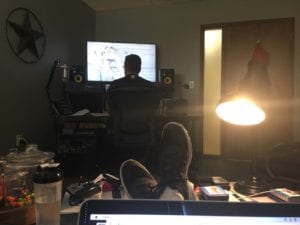 Few would guess such polished productions like “The Last Days of Knight” were put together in the small, subtropical Village of Estero. Ninchritz says he would love for DDP Productions to be the catalyst for a new industry in Southwest Florida.
“Nothing would make me happier than to put this place on the map and expose big filmmakers to Estero,” he says.