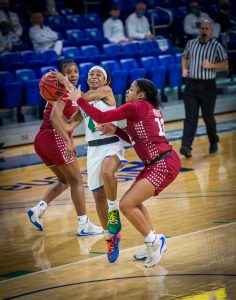 It comes from two athletes knowing each other so well, nothing needs to be said. Pitcher-catcher, quarterback-wide receiver, guard-forward. Make eye contact, and the two understand instinctively what needs to be done.

This is where Florida Gulf Coast University’s Tishara ‘TK’ Morehouse and Kierstan Bell have gotten on the basketball court. That innate recognition of where the other will move. It’s not just from playing the game, but knowing the game and knowing the teammate.

“They have a sense for one another,” Eagles coach Karl Smesko said. “They have a connection. They make it seem like they’ve played together a lot longer.”

Morehouse, a junior, signed with FGCU in April 2020, and Bell, a sophomore, followed a month later, basically insuring FGCU’s dominance in the Atlantic Sun Conference would continue. While the 5-foot-3 Morehouse was a first-team All-American at Nebraska Western Community College, the 6-1 Bell was one of the country’s top high school recruits in the 2018-19 class. She transferred from Ohio State after her freshman year. Among people who watched Bell play was Los Angeles Lakers star LeBron James.

An NCAA waiver allowed her to play after three games, and she debuted with 24 points and 20 rebounds in an 84-61 win over Davidson. Since Bell’s been in the lineup, as of this writing, FGCU has been unbeaten. Only one team has even come within nine points.

“Kierstan is as good as we’ve ever had here. She’s a legitimate, first-round WNBA pick,” Smesko predicts. 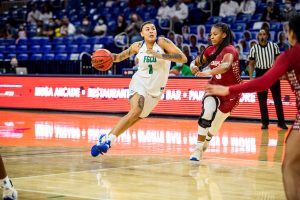 The Eagles will open conference tournament play on March 11 in Kennesaw, Ga. Win that tournament and FGCU will play in its seventh NCAA tournament in nine seasons. The Bell-Morehouse combo, surrounded by a solid supporting cast, could turn this March Madness into March Magic.

Bell averages about 23 points per game, and Morehouse 19. Among Division I scoring tandems in women’s basketball, that ranks No. 2 in the country.

“A lot of players like basketball, but I think they really love basketball,” Smesko said. “They’re two explosive athletes and do a good job of feeding off one another. And they’re both really smart and pick things up.”

The ways Morehouse and Bell arrived at FGCU were totally different.

FGCU assistant Chelsea Lyles spotted Morehouse at a jamboree in October. After watching video of her game, Smesko agreed they should recruit her.

“They were calling me a lot through the days, making sure I was OK,” Morehouse said. “They were active. I liked that.” 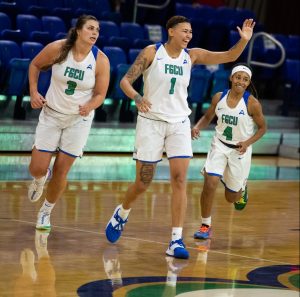 For Bell, a family move got her to Florida.

“Big Ten schools called me, but I didn’t want to stay in the Big Ten,” she said.

When Bell chose to leave Ohio State, her uncle, who lives in Lehigh Acres, suggested FGCU. “He liked the way they played. He said, ‘Check it out. Dunk City.’”

Bell said she and Smesko had “some honest conversations.” Among those was, “Are you sure you want to come here?”

While FGCU is a long way from the Big Ten in stature as well as distance, Smesko and his staff did have the experience of landing Whitney Knight, who chose FGCU over Atlantic Coast Conference schools in 2011. Knight went on to become a second-round pick of the Los Angeles Sparks in 2016.

Soon, FGCU’s two big recruits became roommates. With nearly a foot in height separating them and starkly different looks, they might seem an odd pair.

“We jelled quickly and connected right away,” said Bell, whose devotion to FGCU is shown by her green hair when she took a head shot for the team’s roster page. “I already did the blue.”

Predictably, they bonded over school transitions and basketball—which they never tire of talking about. But their shared interests don’t stop there.

The two are pretty good cooks. Bell can make breakfast with eggs, bacon and sausage, as well as crab boils with shrimp, while Morehouse has made steak, mashed potatoes, broccoli, macaroni-and-cheese and green beans.

Even though Bell likes country music and Morehouse prefers rap, they’ve formed a duet, often making up silly songs as they cook like, “Put the cheese on a burger.”

Connecting on the court

Smesko’s offense is spread out, which lends itself to a lot of movement by the players, who tend to either shoot three-pointers or drive to the basket. Positions basically are interchangeable.

“You’re not a robot and have to do things a certain way,” Morehouse said.

Bell, who leads the team in three-pointers as well as layups, said this is the perfect style for her talents.

“I’ve used pump fakes, which I never used last year,” she said. “Now, I can shot-fake and get to the rim. I can pass or make a straight-line drive. I also can find somebody to screen. And if a person backs off, I can hit that three.” 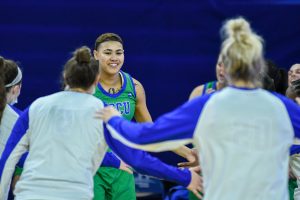 Smesko makes restrictions on Bell in practices in order to help her efficiency. The restrictions can include something like pushing the ball up the floor in a straight line as opposed to doing a crossover dribble.

“He said he wants to see more LeBron than James Harden,” the gregarious Bell said.

Morehouse’s restrictions have included getting the ball past half court in less than two dribbles and not taking a mid-range shot.

“If we get the ball up the floor quickly, the defense is not ready,” she said. “We can get a three-pointer really quick.”

“Unguardable” is how Bell describes the play when she and Morehouse run it well.

“I love ball screens,” Morehouse said. “I can either go to the rack, or she’ll pop out on a three, or she decides to cut and I get the ball to her. It’s really like choosing your poison.”

Bell adds, “They’ll either leave me open or switch and try to guard her, but she’s too quick to guard. I set good ball screens. When there’s a switch and I’m guarded by a small player, I call it ‘baby food.’ Coach calls it ‘mouse in the house.’”

This is where the non-verbal communication comes in. On these sequences, Bell said, “I won’t say anything. I’ll just look at her.”

Morehouse adds, “We pay attention to each other. We both know basketball. We do what we do…We just know how to play the game.”

And whether it’s a crab boil, a sizzling sirloin, or a perfectly executed pick-and-roll or pick-and-pop, the two know how to make a winner.