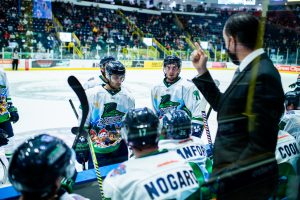 By Craig HandelPhotos by Brad Young

The Florida Everblades rarely have a problem luring and retaining talent. Estero’s professional ice hockey franchise almost always makes it to the postseason, offers shorts-wearing weather throughout the winter, and has loyal booster club members who treat players like their own children or grandchildren.

So when the Everblades have trouble recruiting, you know it’s tough out there for everyone.

“We still have a lot of work to do,” Blades coach Brad Ralph said in early September. “It’s a really competitive market this season.” 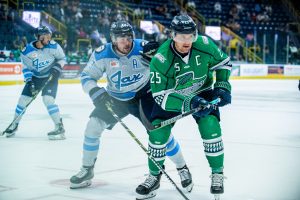 The Everblades do have a strong core of veterans returning with McCarron and forwards Kyle Neuber, Mike Neville, Joe Pendenza, Blake Winiecki and Levko Koper, and defensemen Stefan LeBlanc and Ben Masella.

A couple of familiar faces also return in forward Alex Aleardi, who played in 16 regular-season games for the Blades in 2014-15; and defenseman Jordan Sambrook, who played in 13 games before being a late-season cut.

Florida will open its regular season on Oct. 23 with a home game against Jacksonville. Last season, the Everblades won the regular-season title but ran out of gas in the postseason, losing their first-round playoff series in five games.

Ralph, McCarron and Aleardi said there are basically three reasons why recruiting has been difficult — all related to the global pandemic.

Because COVID cost Canadian and American college players a postseason in 2020 and a full season for some last year, institutions have offered them a fifth year of eligibility. Many are using it to not only get four-year degrees but master’s degrees.

“The pool is around 250 players who normally go pro,” Ralph said. “This year, there were about 50. It’s a shortage for us, and it’s that much more of a challenge.”

With many pro teams choosing not to play last season, players of all ages assessed their situations. Many chose to retire.

“I expected that,” Aleardi said. “Taking a year off, it’s not an easy thing to come back at certain ages. I only played 22 games last year, and they canceled playoffs. Normally, there’s 44 regular-season games and three rounds of playoffs.”

Ralph added, “They had to move on, whether it’s buying a house or marrying or getting a full-time job. They’re looking for concrete jobs.”

Since COVID pushed back the regular season and postseason, the Everblades had less time to recruit. Meanwhile, foreign and domestic teams that didn’t have a season had more time to connect with and sign players.

“I think Europe ran into the same issue,” McCarron said. “A lot of teams didn’t play, so players retired. Top ECHL players were getting offers to fill roster spots. You can go overseas and make more money comparable to the NHL on the lower end or the AHL. It’s a risk because if you don’t have a great season, you can be retired for sure.” 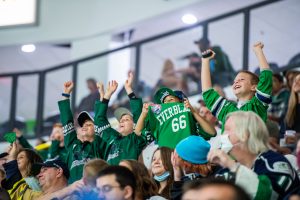 McCarron said he received 10-15 offers to play in Europe this offseason after an ECHL season that included career highs in goals (31) and assists (37).

“One was very close with the Swedish Elite team,” said the Blades’ captain. “It fell through, but unless it was an amazing opportunity, it wasn’t worth it.”

Players who are in their mid–20s often face a dilemma: help their ECHL or AHL team win a championship and play for the dream of making the NHL; or go to Europe, where the pay and benefits are better, while being aware that the chances of playing in the NHL are reduced greatly.

Aleardi played in Europe for six years with clubs in Sweden, Austria and France. Among his coaches was former Everblades’ head man Greg Poss.

He enjoyed learning about different cultures off the ice. On the ice, he was impressed with players working on their skating and puck skills.

“In the U.S., it’s more grit,” he said. “There, they were more well-rounded in their skill set. I grew into mine over the years.”

When Aleardi and his wife considered a return to the U.S., he remembered Everblades General Manager Craig Brush staying in contact with him.

“Craig always asked to see how things were going for me in Europe. We’ve been in contact over the years. I’m a very loyal person, so I took that as a very good thing. I was there only 20 games and the playoffs. Usually, it’s out of sight, out of mind,” Aleardi said. “I felt like I was a piece of their puzzle.” 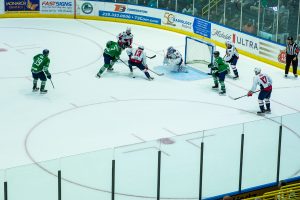 He then reached out to former Blade Alex Kile, as well as McCarron.

“I remember Florida being very professional, and everything I knew had gotten better,” Aleardi said. “It doesn’t feel like the ECHL. They treat players well.It’s a good locker room.”

Aleardi, along with the returnees, gives the Blades a solid core group. The team’s contract with the NHL’s Nashville Predators guarantees Florida a player at every position, so that’s at least three players. Milwaukee, the Blades’ AHL affiliate, didn’t have a team last year, so it’ll be interesting to see who Florida gets from there.

“We have a good group of older guys coming back,” Masella said.“Sometimes having turnover is a good thing. You never know who you’ll get until the last minute. Nashville opens camp, and then the AHL starts the next week. They’ve got good prospect pools. Whoever they send us will be quality.

“We’re looking forward to getting back at it,” he said. “We have a lot of unfinished business. We’re chomping at the bit to get back.”

*All games are at 7 or 7:30 pm. Find the full schedule on floridaeverblades.com