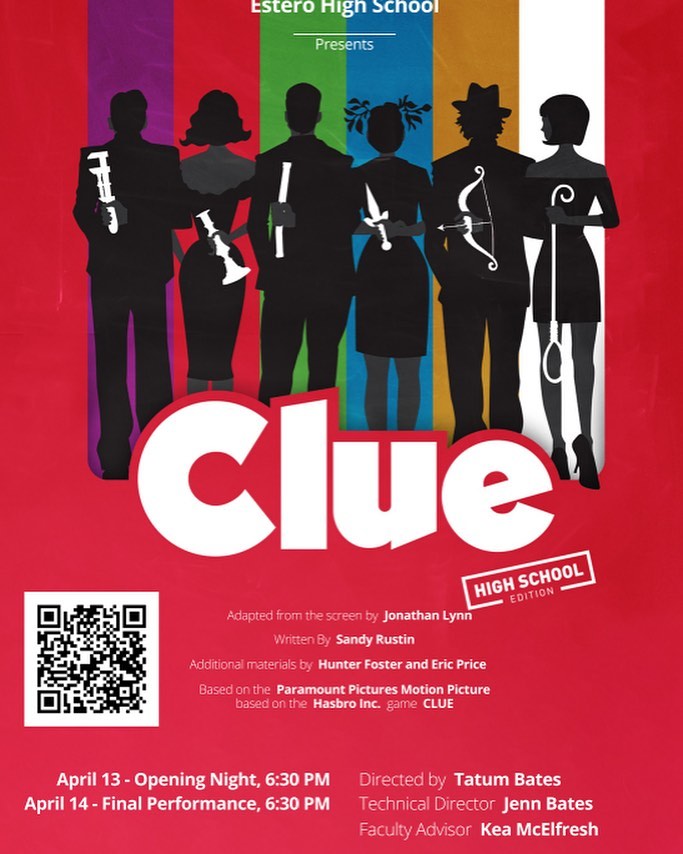 Join the thespians of Estero High School for a wild ride you won’t soon forget! It’s a dark and stormy night in 1954, and you’ve been invited to a very unusual dinner party and the host is… dead.  Each of the guests has an alias, the butler presents a variety of weapons, so who committed the crime?  Secrets are revealed, people are killed and plenty of insanity ensues.  Join the iconic oddballs known as Scarlet, Plum, White, Green, Peacock and Mustard as they race to find the murderer in Boddy Manor before the body count stacks up. Based on the  popular Hasbro board game and the subsequent 1985 cult classic film from Paramount Pictures, Clue is a madcap comedy whodunit that will leave old fans and newcomers in stitches as they try to figure out WHO did it, WHERE, and with WHAT!

This fun, farcical production was adapted from the screenplay by Jonathan Lynn and written for the stage by Sandy Rustin, with additional material by Hunter Foster, Eric Price and original music composed by Michael Holland.

Opening night is Wednesday, April 13th with the final show on Thursday the 14th. Grab your tickets at the above link before they sell out! There’s even an option to rent the video on demand, but you won’t want to miss this performance up close and personal