During a recent virtual meeting, members of the Estero Council of Community Leaders (ECCL) were eager to hear an update on the long-awaited project known as Estero on the River. And Estero Village Manager Steve Sarkozy was just as eager to give it.

Railroad tracks over the Estero river

While there aren’t many details of how this future “riverwalk” development may take shape, there is forward movement on plans for the 67.5 acres the Village of Estero has acquired along the Estero River. It’s a project the ECCL has lobbied long and hard for.

“It’s been on the ECCL’s agenda for quite some time, and now it’s coming to reality,” ECCL President Jim Gilmartin said. “There was a lot of encouraging, supporting and cajoling to make it happen. Like anything, it has to be the right time, the right place, with the right people.”

“Oh yes, this is a project that we’ve been wanting to be involved in,” echoed Joe Pavich, longtime ECCL member and chairman of the board. “We’re highly motivated to be part of this.”

The Village purchased prime real estate along the Estero River at the northeast corner of Corkscrew Road and U.S. 41 in January 2019, later negotiating with the Happehatchee Center — a nonprofit nature and wellness center — to add their five-acre pocket of land. The Bonita Springs YMCA now operates programs at Happehatchee, including environmental education, yoga, wellness events and kayaking adventures.

Sarkozy said the Village will seek input from citizens and work with local leaders to determine how much of the acreage will be committed to development and how much will be kept in its natural state. A goal is to set apart a 200-to-300-foot-wide area along the river for walking paths and connection to Koreshan State Park.

“The primary focus is on preservation of green space,” Sarkozy said. “How much is still an open question.” 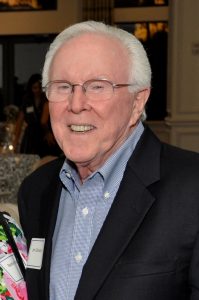 The Village has selected Canin & Associates of Orlando, an architectural and landscape planning group, to prepare and present concepts for the Estero River land. So far, about 150 people have taken part in surveys on how the property should be used. Sarkozy said the Village will seek citizen input through community forums and focus groups in 2021, which will ultimately result in a master plan for Estero on the River.

The possibilities for this future community asset include bike and pedestrian paths, riverfront dining and novelty shops — perhaps even river cruises.

“We want to broadcast to the world what Estero is all about,” Gilmartin said. “I think Estero is a magical jewel.”

Estero should aspire to create a unique destination to define its identity, much like The Riverwalk in San Antonio, said Lee County economic development leader John Talmage.

Sarkozy said the development process will be deliberate, and there will be ample opportunity for community input throughout the coming year.

Leaders of Estero’s three pillar organizations — the Village, the ECCL and the Estero Chamber of Commerce — agree that the health of Estero’s environment, particularly its water quality, is foundational for community development. 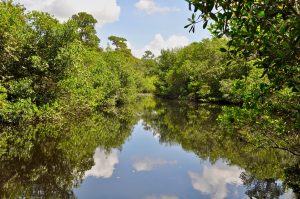 As Florida Gulf Coast University economist Chris Westley said, keep the river pristine, and, like the mantra from “Field of Dreams”: Build it, and they will come.

Calusa Waterkeepers President Ruth Watkins “put the fear of God” into ECCL members about water quality in Southwest Florida during a presentation to the civic advocacy group, Gilmartin said. Making connections with people like Watkins and new Lee County Commissioner Kevin Ruane – an environmental advocate – is valuable for Estero as it collaborates with neighbors on common challenges, Gilmartin said.

“We have to keep on it — it’s a journey that never ends. There are solutions to it, but it’s going to take a coalition of organizations.”

“The big issue to many is clean water,” he noted. “There’s red tide and green algae. There’s septic tanks along the river that have to be dealt with. There’s estuaries. And the canals are a never-ending battle. We have to keep on it — it’s a journey that never ends. There are solutions to it, but it’s going to take a coalition of organizations.”

The Village is constantly strengthening its relationships with regional partners. Estero has entered into a memorandum of understanding with the Southwest Florida Regional Climate Change Compact, a coordinated effort of municipalities throughout the region who have agreed to a plan for reducing greenhouse gas emissions and building climate resilience. 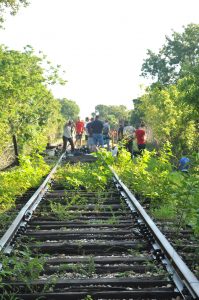 Along with environmental issues, Estero is reaching out to its neighbors on several other regional initiatives. Government leaders in Lee County, Collier County and Bonita Springs are currently collaborating with Estero on a project to potentially turn the inactive Seminole Gulf Railway tracks into a recreational pathway for bicycles and pedestrians. Collier County officials have talked about exploring the potential for a bus rapid-transit route as well.

The feasibility of acquiring the rail corridor is still being explored, with help from the Trust for Public Land, a nonprofit organization leading efforts to extend the Florida Gulf Coast Trail from Tampa to Naples. Locally, a recreational trail along the rail corridor could be built from Alico Road to Wiggins Pass.

The idea is just in its infancy as the collaborating municipalities await an appraisal and explore funding sources including grants, Sarkozy said.

If the project comes to fruition, this future recreational trail would be adjacent to Estero on the River and would likely be accessible from the riverwalk.

A short way down Corkscrew Road, the Village is looking into enhancing opportunities at Estero Community Park, which is currently owned and managed by Lee County. Similar to the planning process for Estero on the River, the Village will seek input from community members to develop a master plan for the park. Additions could include athletic fields and courts, restroom facilities, additional walking and bicycle paths, and enhanced landscaping.

2021 will be a year for planning, but big things are on the horizon for greenspaces throughout the Village of Estero.