While the Village of Estero was officially incorporated on Dec. 31, 2014, Estero’s original founding was more than a century earlier.

Estero’s story begins in the late 1800s with a German homesteader named Gustave Damkohler. It was he who named our village “Estero” — derived from the Spanish word “astillero” meaning “ship-buiding place.” Damkohler renamed “Mosquito Creek” (as Estero River was then known) and also named the tiny village “Estero” — as well as his son, Estero Ostego Damkohler. 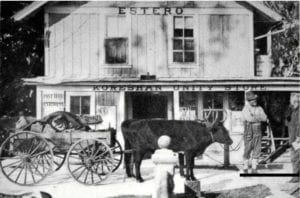 t was Gustave Damkohler who first invited religious leader Cyrus Teed to visit the potential “utopia” of Estero in 1894 and deeded his 300 acres to help Teed found a New Jerusalem on Southwest Florida swampland. Many of Teed’s followers hailed from high society in Chicago. Members of the Koreshan Unity brought culture and industry to the area, operating a post office, printing press, sawmill, bakery, machine shop and performing arts hall. After Teed’s death, the Koreshan Unity dwindled away, but several Koreshan descendants still live in the area. The Koreshans’ legacy can be appreciated by visiting Koreshan State Park.

Other early settlers of Estero included a community of Portuguese fishermen who homesteaded on Mound Key; among them, the Alvarez, Fernandez, Soto and Leuttich families. These pioneers started the first, palm-thatched, one-room schoolhouse on the island. Locals lived off fresh-caught mullet, wild hog and citrus.

One early landowner and business operator was Daniel Floweree, a wealthy cattleman-turned-citrus-grower who employed many locals in his expansive groves. He is said to have been the largest citrus grower in the U.S. with about 60,000 trees. 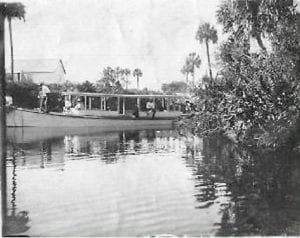 sidents could enjoy Mrs. Edith Trebell’s tropical fruit and jelly shop and the Marshall Brothers citrus stand. Estero residents also patronized the general store on the Koreshan settlement for needed supplies. The Koreshan newspaper became an authoritative resource on botany. By many accounts, famed inventor Thomas Edison was a frequent visitor to the Koreshan settlement as he shared an interest in exotic plants.

The late Evelyn Leuttich Horne, who was born on a houseboat anchored at Mound Key in 1922 and was often quoted in newspaper articles on Estero’s history, remembered both Edison and Henry Ford visiting her family’s property in Estero. Her husband, George Horne, who was born on a citrus farm, helped start a volunteer fire department and became Estero’s first fire chief.

Pioneer children attended the Estero Creek School, originally built in 1904 on Highlands Avenue, then reconstructed after damage from a hurricane in 1910. This schoolhouse operated until 1927 (when a larger schoolhouse was built on Broadway) and can be visited today as part of the Estero Historical Society’s headquarters in Estero Community Park, which also includes a 1902 cottage originally owned by orange grower Frank Hall.

The schoolhouse served as a community center and was the first meeting place for Estero’s oldest church, Estero United Methodist. Traveling ministers would come from Fort Myers by freight boat, while most parishioners came to church by horse-and-buggy.

Before U.S. 41 was constructed, a wagon-rutted trail was all that connected Naples to Fort Myers. The railroad made its way through Estero in 1922, and the Tamiami Trail reached Estero by 1924. Florida Power & Light brought electricity to the area just after World War II.

For years, Estero had only a few hundred residents. Major development began in the late 1980s, and by 1990, Estero’s population had reached 10,000. During the past 30 years, the village’s population has tripled to more than 33,000 today.

Those interested in learning more about Estero’s uniquely rich history may wish to visit the the Estero Historical Society website at www.esterohistoricalsociety.com.