As our community continues to grow in terms of development, population, economy and culture, a musical renaissance has emerged, too. Ben Allen (The Voice), Casey Bishop (American Idol) and Ryleigh Plank (The Voice) are among the latest talent show contestants from Southwest Florida.

Besides being talented, young musicians in the area, Bishop and Plank have another thing in common — they both attended the arts program at Cypress Lake High School, a unique curriculum within the public School District of Lee County. Another Cypress Lake student, Kristen Noble, aims to be the next rising star from Estero.

Are more superstar singers in the Southwest Florida breeze? We checked in with past and up-and-coming talent to find out.

Success doesn’t just happen; it requires planning and dedication on the part of the young artists and their parents, combined with the training they receive at Cypress Lake High School Center for the Arts. This secondary school located in Fort Myers specializes in five art programs: Music, Dance, Media, Theatre and Visual Arts. It’s an alternative to traditional education and tailored for those students with a passion to perform and create.

“We have been fortunate to have a long history of amazing talent come here,” said Vocal Director Gary Stroh, who’s been teaching at the Center for the Arts and directing its choral groups for 20 years. “Students get to spend more time working and getting skilled in the sections that they love to do. And we have lots of really good teachers that can help them out.”

To help prepare last season’s “American Idol” contestant Casey Bishop—who made it to the Top Four—Stroh and his staff worked on her ability to perform in front of people.

“Casey was amazing vocally, but kind of shy in front of students, so we worked with her on the performance aspect to become more comfortable,” Stroh shared. “The advice we provide is different for every student, but we try to help them out and be there for them on their journey.” 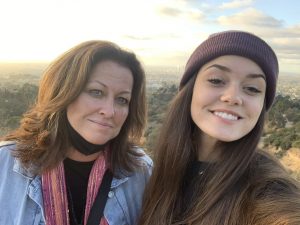 “I loved Cypress and the freedom of expression it offers students,” said Bishop, 16. “I did a lot of growing there and learned how to breathe correctly, which I’m still working on.”

She said the students and staff were very supportive and Stroh was her “absolute favorite” teacher.

Although now back home in Estero, Bishop is being home-schooled for her junior year so she can split her time between here and Los Angeles to record an album with 19 Recordings and publishing partner BMG Rights Management. The label has been connected to “American Idol” since the first season, when winner Kelly Clarkson signed with RCA Records and 19 Recordings in 2002. Other stars such as Carrie Underwood, Adam Lambert and Jordin Sparks also signed with them. There is no set date for Bishop’s EP release—but stay tuned.

Currently, college is on the back burner to her budding musical career.

“I can always go back to it, but I can’t go back to this time,” Bishop said. 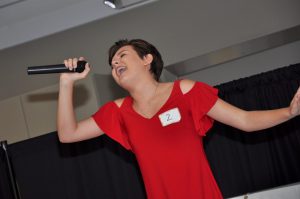 Ryleigh Plank in the 2017 Miromar Has Talent competition

Meanwhile, another Cypress alumna, Fort Myers’ Ryleigh Plank, 20, who was eliminated before the final round of “The Voice” last year, was first discovered in Estero’s own talent competition in 2017. Plank came in first place in the fifth annual talent search, “Miromar Has Talent” for the 14-20 age group. The three-week competition hosted by Miromar Outlets started with a large field of contestants in two age groups. The top six performers in each age group were chosen to compete in the finals after preliminary and semi-final rounds, which attracted many spectators and competitors.

While Plank might have only won a $500 shopping gift card, three years later she is currently being mentored by her favorite icon and coach on “The Voice,” Grammy award-winning Florida singer Ariana Grande.

A platform for rising stars

Televised singing competitions like “American Idol,” “X Factor” and “The Voice” have become an increasingly popular way to break into the music industry in recent years, with artists winning their first big record deals after competing.

“I’ve always wanted to audition and get through on one of these shows,” said Bishop. “It has impacted my life so much. If I didn’t do Idol, there is no way I would be recording music and signed to a label right now. Idol gave me everything in a matter of months.”

Bishop wasn’t the first “American Idol” contestant Stroh has had a hand in mentoring, either. Cypress Lake alumna Vonzell Solomon, who goes by the stage name “Baby V,” finished third on the hit reality show in 2005—the year Carrie Underwood won.

Stroh cautions that while television talent competitions can open doors for young artists, there’s a lot behind the scenes that audiences never see.

“Before they get to the TV judges, they have gone through six or seven rounds of auditions and producers and all of that—it’s both skill and luck. I had a girl who made it all the way right before the TV judges and they were like, ‘You know, you look too much like Fantasia who won last year, so no, you can’t be on the show.’ It’s just like the music industry—it’s a combination of talent and meeting the right people at the right time, unfortunately.”
Timing is everything. Even Bishop revealed that just the week prior to her “American Idol” audition she had also tried out for another singing show, but they passed on her, saying it wasn’t the right time yet. Their loss. 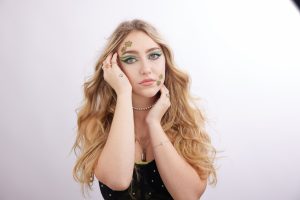 The next musician from Estero?

Meet 16-year-old Kristen Noble, who also resides in Estero. She is a junior at Cypress Lake, vice president of the Vocal Department, as well as a member of the school’s nationally recognized, award-winning a cappella group (TAG).

“I love Cypress so much—it’s a great community to be in,” said Noble. “It’s a great place to learn to sing and to be around other people that love to sing.”

Although the pop singer and songwriter is inspired by her peers’ success, she decided the talent show route was not the direction for her. Instead, Noble has chosen a more grassroots, viral approach for her music career.

This choice was a relief to her mother, Karen Noble, who confided,

“I asked her several times if she would like to audition, but it was her decision, and I’m grateful we all get to be home as a family until she goes away to college.”

Her decision hasn’t kept the Nobles from traveling to Nashville, though, to record Kristen’s songs with famous musicians and Grammy award winners including Billy Nobel (keyboardist for Tim McGraw and Faith Hill since 2012), Steve Brewster (drummer who has recorded with Bob Seger, Jewel, Chicago, Richard Marx) and many more accoladed artists.

As a result, Kristen has released two songs so far on Spotify and other online streaming channels. It’s paying off, too. Her most recent song, “Simple Math” — which she wrote herself — has reached over 53,000 listens on just the Spotify platform alone. No small feat for an indie musician without the television spotlight to amplify her.

A portion of every stream goes to the MusiCares Foundation, which has provided more than $60 million in health, financial and rehabilitation resources to music people in times of need since its formation in 1989. Noble is also looking for opportunities to help raise money for local charities by donating her time to perform at fundraising events in Southwest Florida.

A new song and music video, “Mercury in Retrograde” released in January, and three more songs will be staggered throughout 2022. Next up, though: college applications.

“I want to go to Belmont University, which is in Nashville, for songwriting. I think about how much college will help me with not only education but networking,” Noble said. “I think it’s all going to unfold one step at a time. I’m just trying to focus on taking the next right step.”

In the meantime, “I’m constantly writing all the time—when I get home from school, it’s me and my guitar, or me and my piano, every day,” gushes Noble. “At Cypress, there is a wall with alumni that have gone on to do things. Personally, for me, seeing that and walking by it has been inspiring, and I’ve always hoped, ‘Oh, maybe I’ll be on there one day.’”

Perhaps she will be another famous protégé of Cypress Lake High School, further bringing attention to the talent flowing from the Village of Estero.