Have you ever wondered how a city puts together an annual budget? The process begins with two important documents: the Strategic Plan and the Capital Improvement Program, known as the CIP.
The Village of Estero Strategic Plan has been developed based on the findings from all of the studies, master plans and community outreach efforts the Village has undertaken during the last three years. This important document provides an annual analysis of major issues and tracks Estero’s progress. It takes the big-picture vision of the Comprehensive Plan and focuses it into target objectives for the coming few years.
The CIP builds upon the objectives identified in the Strategic Plan. It is a compilation of all known or anticipated projects which will benefit the community. The CIP feeds into the Village’s annual budget by creating a timeline and cost projections for public infrastructure projects for the next five years. The CIP will be updated annually as new projects are identified, and each year, these projects may be reprioritized.

Roadway Projects
Estero Parkway improvements, estimated at $9.3 million, will be the major roadway project for fiscal year 2018-19. Several other projects are slated to begin in 2019, including improvements to Broadway Avenue west of U.S. 41, a project identified primarily from residents’ “requests for action” following last summer’s storms. There are also future plans for widening Williams Road from U.S. 41 to Via Coconut Point. Although not in Estero’s budget, the Lee County Department of Transportation has plans for widening Corkscrew Road from Ben Hill Griffin Parkway to Bella Terra Boulevard beginning in 2019.

Intersection Improvements
Intersections scheduled for improvement have been identified through traffic studies commissioned by the Village of Estero, primarily the Area-Wide Traffic Study conducted by Kimley-Horn and Associates and the Coconut Road Traffic Study prepared by Trebilcock Consulting Solutions. There are several intersections scheduled for improvements during the next five years, including intersections along Coconut Road, Williams Road, Corkscrew Road, U.S. 41 and Ben Hill Griffin Parkway. Williams Road will see improvements starting the soonest. Turn lanes will be added for Estero High School to alleviate traffic backups, and the exit for Walgreens west of U.S. 41 will also be improved.

Bike/Pedestrian Projects
More projects will be added to this category after the Village receives findings from the Metropolitan Planning Organization (MPO)-funded Bike and Pedestrian Master Plan. However, some improvements are planned, including crosswalks on Coconut Road. 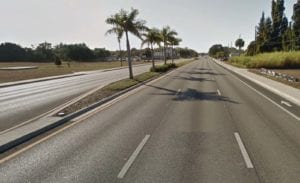 The most impactful landscaping projects will occur along Estero’s main thoroughfares, U.S. 41 throughout the Village and Corkscrew Road from Interstate 75 west to U.S. 41. Design for Corkscrew Road’s beautification, estimated at $1.9 million, is slated for this year, and installation is set for 2019-20. Landscaping of the U.S. 41 median should begin later this year. The Village of Estero also will be getting monument signs to mark the entry into our community. These branding signs will be placed at Estero’s boundaries on U.S. 41, I-75, Three Oaks Parkway, Ben Hill Griffin Parkway and Corkscrew Road. 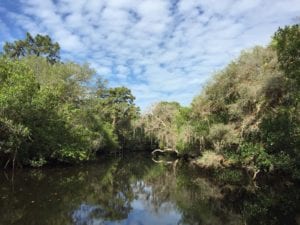 Land Acquisition
Several potential land acquisitions have been identified, with $26 million in the 2018-19 CIP Budget designated for a major land purchase. More details are expected soon on this property and its value to the residents of Estero.