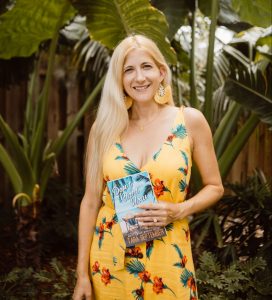 Tara Settembre with her newest release

“They asked me to write a book about them,” said the Estero mommy-blogger-turned-romance-writer. “I had to tell them, ‘That’s not the type of stories I write.’”

She did, however, dedicate her second novel to them: “To my little heroes, Logan and Ben, who asked me to write a book about them. After I explained that’s not the kind of stories mama writes, they settled for this dedication.”

What does flow readily for Settembre, who writes under the pen name Tara September, are fantasy and day-dream worlds that take today’s escape readers into sensuous and sexy romance triangles and plot twists with happy-for-now or “ever after” romance genre endings.

If adult romance is on the reading list, Tara September has a new release, “Don’t Start Now,” which follows several other award-winning contemporary romance novels. She is also the chapter president for the Southwest Florida Romance Writers (SWFRW).

Settembre says she is far from the romance writer stereotype: uneducated, single and living with cats.

“While I do have four cats,” she says, “I’ve also been married for 13 years to my husband, Raphael Ocampo.”

Ocampo is the CEO and founder of Tekambi, a financial technology marketing company with offices at Coconut Point in Estero.

“We met in New York City in a very romantic comedy way, on a NYC subway,” she said. That scene might just show up in a future novel.

A former Huffington Post blogger, Settembre was a public relations executive for The Walt Disney Company before her career shift to romance writer. For nearly two decades, she has penned a popular lifestyle, travel and parenting blog at TaraMetBlog.com and has amassed more than 35,000 followers on Instagram.

With “Don’t Start Now” just released, Settembre is now engaged in a series of novellas written by a dozen well-known authors as her fiction writing has become her major focus.

“My career in journalism and public relations peaked in executive responsibilities, and reading has always been my escape,” Settembre said.

This very literary, factual and research-oriented writer and influencer has now shifted gears, and there’s no going back.

“One day after a drive home from working in public relations at Disney, I was feeling great about accomplishing my dreams: college, writing, family and career — a real go-getter in the world of executive success,” Settembre said. “I said to myself, ‘I have no regrets.’ But one was still lurking in the back of my mind: I had not written a novel.”

She trashed her first fiction manuscript, which she started in high school, as she determined to fulfill a lifetime dream she originally thought unattainable. 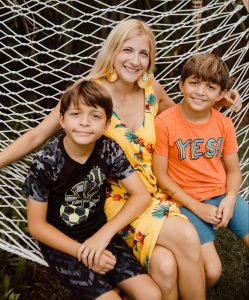 Tara Settembre and her sons

Settembre, who did summer work for a newspaper in high school, earned a Master of Arts in journalism and was arts editor for the college newspaper at New York University while pursuing her master’s degree. After marrying and having children, she turned to blogging.

“I started a web blog when they were a new idea and had carved out a niche including tips for moms from my own experiences raising twins and other lifestyle parenting and travel tips that appealed to the fresh blog readers,” said Settembre, who also wrote for other blogs such as the Huffington Post. “My reader number exploded until I was considered an influencer and earned income from ads and sponsors.”

“The next step was to take my escape reading, adult romance, and create my own novel to the tune of a song that haunted me,” she said.

Inspired by the Rick Springfield song “Jessie’s Girl,” her first adult romance novel of the same name was published after four years of editing. It became successful while she raised her boys, managed their schooling at home during the pandemic, and continued to write her blogs.

“Now I was addicted to writing adult romance novels, with more to follow,” Settembre said.

One of the best decisions she made was to put her novels on audio books, partnering with engaging narrators. Settembre creates the novel, and narrators make it come to life.

“During the pandemic, my sales of print and eBooks took a dip, yet audio books sold more,” she noted. Audio books offer an opportunity to multitask while enjoying a steamy romance.

An Ohio reader left this review of “Jesse’s Girl” on Amazon: “This book was a pure joy. Loved the main characters, fabulous dialog, small-town setting, and just the right amount of backstory. I’ll watch for future books by this author!” 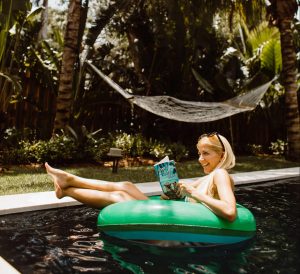 Settembre’s next goal is to reduce the “heat” in some of her stories and submit them to the Hallmark Channel.

Some new writers have qualms about how far to go with the publisher’s adult content requirements. In Settembre’s case, it means the mom-blogger has moved into an arena that some could consider out of sync.

“Not really,” said Settembre. “I write what is appropriate for the content of the novel. I don’t write sexual content just to sell books. When publishers or editors ask for more or less heat, they are changing my novel’s direction. Unless I see it their way, it does not change.”

It appears she has achieved rapid success as a romance writer.

“Unlike many authors who find the marketing aspect of publishing novels daunting, marketing was my joy and my expertise. I love every aspect of taking my books to market, presenting at conferences, and going where my books take me,” Settembre said. “So far, with three award-winning, stand-alone novels, I am now pursuing a series, and there’s no end in sight.”