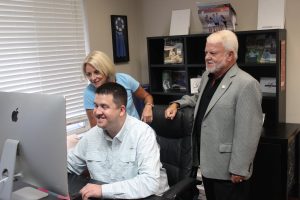 Estero Life Magazine can proudly claim its status as the first lifestyle magazine exclusively created for the Estero community. Its roots predate the incorporation of the Village of Estero — Florida’s second youngest city at just 7 years old.

The first printed issue hit Estero mailboxes in September 2010. However, a big change took place in 2016, when Publisher Gary Israel bought the magazine from its parent company and brought every aspect of its production home to Lee County, Fla.

This month marks the fifth anniversary for Estero Life Magazine’s all-local ownership and operation. Israel, who has lived in Estero’s Stoneybrook community for nearly two decades and is highly involved in the Rotary Club of Estero and many other community organizations, believes partnering with local businesses makes a better magazine.

Foremost of these partnerships is Estero Life Magazine’s longstanding relationship with Presstige Printing, which has been responsible for the design, printing and distribution of the magazine since September 2016.

“Prestige Printing made the transition to ownership of Estero Life Magazine so much easier than I ever imagined. The entire team, along with management, has minimized nearly all of the usual stresses that accompany a publishing business. Every month, they produce a quality magazine in which our residents take great pride,” Israel said. 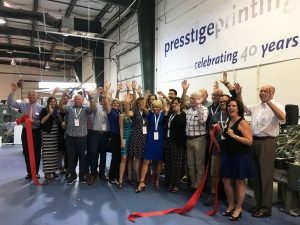 To say Presstige cares about the success of its customers is an understatement. Having weathered changes in the printing business for 41 years, the leadership of this family-run operation understands the stresses of running a small business and cares about helping other local business owners.

“We want to have that deep relationship with our customers,” said Presstige Printing President Wes Weidenmiller. “We want to help every step that we can outside of just delivering a printed product on time.”

While meeting deadlines and producing quality products are essential, Weidenmiller has found that building relationships — coming alongside to help clients solve problems — is simply good business. Since its founding in 1980, Presstige has built a reputation for outstanding customer service.

Over the years, Presstige has received numerous accolades, including industry awards for the design of Estero Life Magazine.

In 2020, the year of COVID, Presstige was honored to be named “Small Business of the Year” by SWFL Inc. chamber of commerce.

“That was neat because it was a team accomplishment. That award is about the kind of company you are, what kind of place you are for people working here, and what you do within the community,” said Nick Weidenmiller, Presstige’s controller and Wes’ younger brother.

Presstige received a similar honor in 2014 when the Association of Fundraising Professionals-Florida, Collier and Lee chapter, named the Bonita Springs printing company Outstanding Philanthropic Organization of the year, an award given to a for-profit business that has provided direct financial, in-kind or volunteer support to nonprofit organizations and charitable projects in the local community.

Presstige works with close to 100 nonprofits each year and always gives beyond what is customary or expected, Wes said.

“The truth is, we just always figure out a way to say ‘yes’” said Nick.

Keeping it in the family 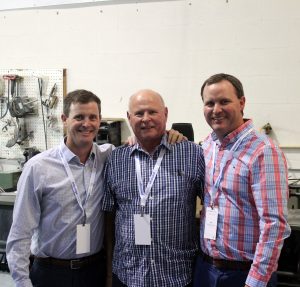 Their father, Bob Weidenmiller, bought into a printing shop franchise in 1980, opening his new business on Tamiami Trail in Naples. When a major real estate developer approached Bob about taking on a project outside the wheelhouse of the franchise, the young entrepreneur decided to say “yes” and opened his own printing business.“Dad invested in a Heidelberg press that could print two passes of two color to create a four-color process and started doing work for Westinghouse Communities, which was our largest client for the first 20 years of the company,” Wes said.

Another longtime client was the Naples Beach Hotel, located just five blocks from the Weidenmillers’ home.

“We would go over and play golf and have a sandwich by the pool, and the menus on the tables were printed by us,” Wes recalled.

His childhood memories include playing in the parking lot behind the print shop on a Saturday with his brothers while their parents worked inside — before the boys were old enough to work alongside them in the family business.

“We did everything from filing to hand-collating and delivering products and graphic design,” Wes said.

Although Wes and Nick grew up around the printing business, neither initially chose it as a career. Instead, the brothers had their sights on working in the sports industry.

Wes formerly ran golf tournaments for the PGA Tour with the United States Golf Association (USGA), a job that kept him busy traveling to some of the best golf courses in the nation before he came back home to Southwest Florida to help his dad run the family business in 2005. That’s when Bob moved Presstige to its current location in Bonita Springs near the former dog racing track.

Until recently, Nick lived in Washington, D.C., working for the Washington Nationals baseball team. Before that, he worked on programming strategy at ESPN headquarters in Bristol, Conn.

“I did miss the smell of paper,” he said of his decision to come home and help his big brother run the business after their father’s retirement. 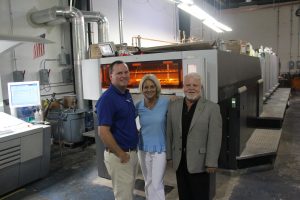 Wes purchased the company in January 2020 and recently invested in an overhaul of the production press room, prepress area and mailroom.

“Last year, we improved every aspect of the operational side of the process,” Wes said. “I know now we have the best products to offer in Florida and the region. We can manage customer expectations that are continuously getting tighter in terms of deadlines, and we can deliver A-plus products in record time at a fair price.”

This kind of quality requires something more than just state-of-the-art equipment. It also takes teamwork. Presstige Printing currently has 43 employees, several of whom have been with the company more than 10 years.

“It’s not possible to get printing done without people communicating and working together at every step of the process,” Nick said. “That’s what we look for when we hire. You can’t train attitude.”

Despite rumors that printing is a dying industry, Presstige continues to prove otherwise. The digital marketplace is oversaturated and overwhelming, Nick said, adding that businesses often have trouble figuring out how to gauge success with online marketing efforts.

“Because digital is everywhere, that’s why printing is even more effective,” he said. “Putting something in someone’s hand or mailbox still has some intimacy that leads to effectiveness.”

“I’m pretty bullish on print,” Wes added. “Our business is growing 15-20 percent a year. We’ve proven this industry is alive and well.”

He was glad Nick was there to help him manage the pressures induced by the COVID-19 pandemic, when many of their clients were cutting back on expenses and just trying to figure out how to survive.

It was reminiscent of watching his father manage the business during the Great Recession of 2008-09. Wes remembered how calm his dad seemed.

“I said to my dad, ‘How do you continue to do this?’ And he said, ‘We’re just going to problem solve our way out of this,’” Wes recalled. “I thought this was a once-in-a-lifetime event, and he said it was the fourth time he’d been through something like this. Looking back, he had no better sense of how to recover than I did, but he had learned to be resilient. It’s no different than facing a hard printing project or meeting a hard deadline — you just figure it out.”

“Frankly, 2020 was the best year we’ve ever had,” Wes said. “We couldn’t have done it without being a team and a family.”