Skip to content
Estero High School Principal Michael Amabile, former Principal Clayton Simmons, Culinary Program Chef Shanna Ross and Senior Class President Lillian Broduer were among those who came to honor former Councilmember and Estero’s first mayor Nick Batos with a paver in his name to be located at the front of the school. 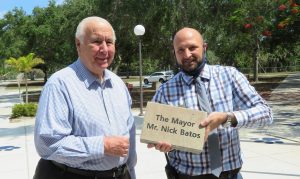 Batos was given this special recognition as he had served as the Village Council’s liaison to the Estero High School during his two terms on Council. Among the many projects Batos worked on in conjunction with the school, his major contribution was initiating the “Evening under the Shadow Wood” fundraising event which ran four years in a row. It started as a project to support the culinary department to provide the tools and equipment used in the industry, allowing the students to participate in events throughout the community and compete at the state level.
The program grew in 2019 to support not only the culinary department but also the music, dance, drama and visual arts departments, raising over $43,000 that year.
In 2020, Batos acquired signs to honor the class of 2020 whose graduation events didn’t take place due to COVID. He made sure every graduate was recognized with a personalized yard sign that was proudly displayed for a week in front of the school on Williams Road.
Batos served on the initial 2015 Village Council as District 6 council member and mayor. He served two terms, ending on March 15, 2021.  As chairman of the Estero Council of Community Leaders, Batos had been actively involved in the process that resulted in the incorporation of the Village of Estero on December 31, 2014.
Posted in People, Village Connection and tagged Estero High, Estero mayor