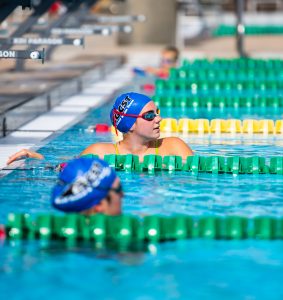 When Don Henshaw was 4 or 5, his mother, June, taught him to swim.

When his daughters, Jen and Heather, were in preschool, Don and his wife, Connie, taught them to swim.

And as soon as Heather’s children, Cadence and Keelan, and Jen’s children, Parker and Karter, started walking, they learned to swim, too.

It’s been a multi-generational tradition for the family to get in the pool and swim those laps.

That effort has led to medals, trophies, honors and scholarships. Along the way, dozens of other families in Estero and beyond have benefited from their coaching.

For 45 years — 23 with the Estero-based Gulf Coast Swim Team he founded — Henshaw has lost count of how many youths he and Connie have coached. “Likely more than 1,000,” he said modestly.

Because they start with children so young, the Henshaws have taught many swimmers for 12-14 years. Heather Fort, who has been coaching for 21 years, said they’ve often been like parents to the youths.

“They’re encouraging and listening,” Fort said. “Every kid is different and has different needs, so they help with whatever they need.”

Gulf Coast Swim Team (GCST) graduates have won 12 state championships, and 26 swimmers either swam or will swim in college. In addition, GCST teams have won 11 Florida Open Water titles since 2009.

While that kind of success is rewarding, Henshaw also gets excited seeing brand-new swimmers gain enough confidence to remove their flotation device or win their first ribbon.

“We try to be inclusive so we get a lot of kids in the program,” he said. “If they’re in for a short time, they’ll learn to swim well, and we can drown-proof them. I hate reading the paper and seeing kids’ drowning deaths.”

Henshaw and the other GCST coaches teach more than swimming and racing.

“It’s perseverance, effort, doing well academically and being a pillar in your community,” he said. “And we feel like we have a hand in the journey.”

When it comes to effort for reward, few sports compare to swimming. The top athletes often train twice a day where they’ll log in more than 6,000 yards per practice. As they get closer to competition, they often shave themselves to reduce frictional drag, which also heightens the swimmer’s awareness and feel for the water.

“They’re pouring their heart in the pool for a few minutes of glory,” Henshaw said. “Training is 98 percent of the journey with one percent racing and one percent afterwards.” 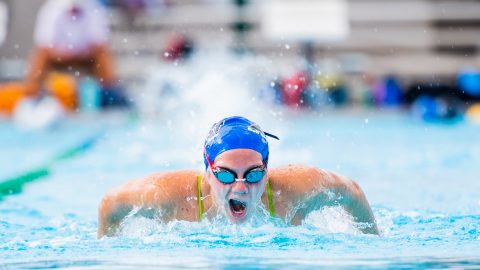 The Gulf Coast Swim Team has had a number of great athletes.

Heather Roka swam the English Channel. Molly and Tayler DuBrasky qualified for the Olympic Trials, as well as Chelsea Franklin and Nicholas Caldwell.

Now Henshaw’s granddaughter, Cadence Fort, has a good chance to join that special group. The 15-year-old already has won a state title in the 500-yard freestyle.

“It’s crazy,” she said on receiving the national news by email. “I had hoped to make the junior national team.”

Fort showed her toughness when she overcame being kicked in the face during the race.

“I remember when I was racing, I was really nervous,” she said. “But I settled down and had my best placement.” 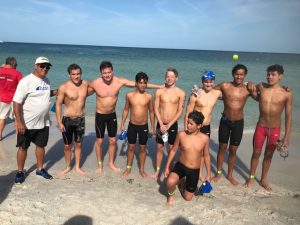 In the first weekend of June, Fort won the 15-16 girls 5K and finished first overall in the girls 5K combined standings at the Southern Zone Open Water Championships in Chattanooga, Tenn.

“She had a great day,” said her mom and coach Heather Fort. “She was more aggressive. The more you do it, the more experience you get. She’s getting more comfortable and realizing she can compete at this level.”

Heather added the biggest challenge for Cadence is being in the limelight.

“She’s used to being in the shadows,” she said. “She doesn’t like to talk about what she’s done. She’s very low key, quiet.”

Cadence’s cousin Karter Seluk placed fifth in the 11-12 Girls 2K, and his brother Parker finished seventh in the 13-14 boys 5K for Florida, which beat North Carolina and Georgia for its third straight team title. Keelan Fort, who just missed making the Zones trip by one spot, was the only local boy in Class 2A to make the finals at the state meet. He finished eighth in the 100 butterfly.

“It wasn’t one of my better races, but it was a good experience,” he said. “I’ll probably do open water next year, and when I do, I’ll be ready to race the older kids.” 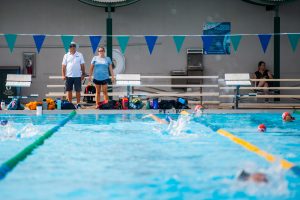 Two years after starting to swim competitively at age 10, Fabian was named Florida Swimmer of the Year at age 12. He won the Florida Open Water for ages 13-14 at Fort Myers Beach, and he also won the 1,000-yard freestyle, 1,650 free and 400 individual medley at the 2021 Florida Swimming Age Group Championship South in March. This swim meet covers Hillsborough to Collier counties.

Henshaw thinks Fabian also has potential in the individual medley.

“I like all the strokes,” Fabian said. “I feel the backstroke is my best. I’m trying to work them all the same level. Heather has taught me all the basics — now I’m working on endurance for the longer races.”

For these young swimmers to get to the next level, Henshaw said there’s no secret to what’s needed: hard work.

“You only get what you put out,” he said. “You have to be dedicated to the program and to the sport. Also, the clock doesn’t lie. It’s very unforgiving.”