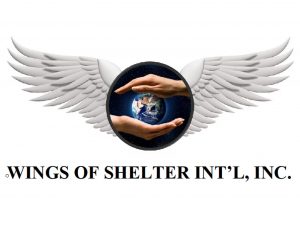 More than 25 years ago, Neale Donald Walsh started writing a series of books called “Conversations With God.” The books stayed on The New York Times best-seller list for 137 weeks.

Missionaries Sally and Lowell Senitz can relate. At God’s calling, they went to Romania, Haiti, Sudan and the Kibera Slums of Nairobi, Kenya, to help rescue children from sex trafficking. They did this for more than 35 years.

When they came to Southwest Florida in 2007, they thought they’d live the retired life. Seeing grandchildren, going to the movies, relaxing.

“I’d prefer to lay on the beach and sip mai tais,” Sally said.

But God had other plans. How did they know? Because God told them. Sally and Lowell soon realized trafficking was as serious in the United States as it was in Europe and the Balkan Trail.

So Sally and Lowell started Wings of Shelter, a safe house for minor females rescued out of domestic sex trafficking. The goal is to rescue, restore and rehabilitate survivors through a victim–centered, non-punitive approach.

Licensed through the Florida Department of Children and Families as a long-term group home, there are no limits to how long a child might stay. The safe houses are staffed by part-time and full-time caregivers, both single women and married couples, in order to provide a familial, rather than an institutionalized, setting.

“If you change one girl’s life, you change a generation,” Sally said. “They go through college and change their self identity.”

A big part of their duties include training doctors, nurses, judges and public information officers, as well as individuals who also want to start safe houses.

This work often can be daunting, heart-breaking and sometimes unsuccessful; but Sally doesn’t see it that way.

“The results are up to God,” she said. “Overcoming evil is a daily work and not a conclusion. We are winning the battle. We will be victors. God is calling victory in the end.”

Sally and Lowell were successful business people in the 1970s. Corporations hired Sally as a marketing trainer, and she had a staff of 15. Lowell was a systems analyst and programmer.

However, they soon felt God’s tug.

“I accepted Jesus, and it revolutionized my life,” Lowell said.

It also made life more dangerous. They went behind the Iron Curtain when it was still under communist control to train under international teams. One of the first things they did was run a Romanian ministry and safe house. They pretended to be tourists, but inside their luggage contained Bibles, medicine, Christian material, food and help aids to Christian martyr families in Eastern Europe.

They rescued children from the streets and sewers. With little or no education, these children were often sold by traffickers for survival.

The safe houses held more than 45 youths at a time.

“It was the most devastating thing to behold,” Sally said. “I cried when I first saw what conditions they were living in. Very inhumane. But I also felt motivated to do something for these children.”

They worked with a Christian missionary agency to assist in training in the Kibera Slums in Nairobi and helped a friend’s orphanage that held more than 48 children at a time. Besides giving them food, they trained the youths to learn job skills in the areas of computers and wood working.

They also taught them two years of Bible studies. Graduates then went to small churches and evangelized in country areas, took jobs and raised families.

“They all wanted to come back to help at the safe house with others coming into the program,” Sally said.

Lowell and Sally trained United Nations officials and police in Haiti how to better spot children being trafficked between Haiti and the United States. They also went to Sudan and trained with a friend who owned a safe area for children whose parents were killed in Darfur. At that time, commercial airlines wouldn’t fly into the Darfur area, but they worked around that by renting a cargo plane and missionary pilot in Nairobi to fly to Sudan, where they landed on the desert floor just across from Darfur.

Sally added, “I pray seriously to God daily, and often He will give thoughts into my mind that I can recognize are not mine but coming from God.”

Returning to the U.S.

“We ran Bible studies for young couples who just married,” Sally said. “We took Nolen’s program, then we began to teach the GPS series. It led us to help others walk with the Lord.”

Sally said the greatest thing about GPS is that it’s not only inspirational and motivational but it gives concrete instructions on achieving goals with God.

“It assists and identifies what steps you need to reach those successes,” she said. “There’s clarity, support, encouragement, direction and assistance.”

The two said there’s a distinction between knowing what your calling is and what your giftedness is.

“Sometimes, God doesn’t put us in areas where we’re most skilled,” Lowell said. “It’s not only what God wants me to be but where he wants me to be.”

As Sally noted, “We’re one little part of his plan. He’s using us as his hands and feet.”

The successful stories of youths Sally and Lowell have helped in escaping sex trafficking are heart-warming. Many of the graduates have children. One is going for her master’s degree. Sally said they’re going from victims to survivors to overcomers to leaders.

“They always keep in contact with us,” Sally said. “They want us to know, ‘You saved my life.’ It’s beyond description. It feels like a juicy peach.

“And it changes your life as you go.”