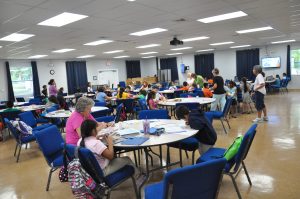 During the recent “Grow Forward Gala,” donors and program volunteers joined New Horizons staff and selected Super Teens to celebrate the organization’s 20th anniversary while anticipating how New Horizons will continue to empower at-risk children to become leaders in our community.

“We think it’s tough for kids to battle through everything they face today, and if we can do anything to help, then that’s what we want to do,” said Roderick Price, a pioneer of the Rosemary Park site who has been volunteering with his wife, Sue Price, at New Horizons for over 15 years.

Volunteers are instrumental to the growth and success of the program. They serve as tutors and mentors, providing words of encouragement—and stern talks when necessary. They help children see a future full of hope and purpose.

“I went to a couple of meetings and fell in love,” said long-time volunteer Jo Gallico. “I’ve never been involved in something that truly stirs my soul and makes me feel closer to God.”

From ‘Wild Child’ to Valedictorian

“I never thought college was an option for me,” said Yesenia Valdez, a New Horizons graduate who is now studying health science at Florida Gulf Coast University.

“New Horizons built me. Growing in such as loving environment taught me how to treat others. They helped me to apply for scholarships and get my first job.”

The little girl who once struggled to find the motivation to learn basic math and reading now has grown into a young woman with a bright future, strong faith in God and unwavering determination.

“I’ve gotten to do so many things I never thought I would do,” said Valdez, who joined the Super Kids Club at Rosemary Park shortly after failing the first grade. 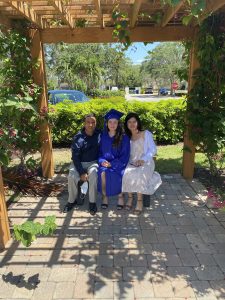 Yesenia Valdez with parents at her New Horizons graduation

A self-described “wild child,” Valdez had no idea how impactful New Horizons would be on her life as volunteers encouraged her to dream bigger and instilled values like perseverance and courage. Valdez advanced to Super Teens Club at Estero United Methodist and became the valedictorian of the New Horizons Class of 2021.

During her junior and senior years at Bonita Spring High School, Valdez took advantage of the dual-enrollment program at Florida SouthWestern State College and attended the College Bound Club at New Horizons, where she learned how credit hours work, explored career paths and charted out her future. She also worked as a club mentor at New Horizons, providing guidance for fourth- and fifth-graders as they made the transition to middle school.

“It’s just fun. These kids were in the same spot I was in,” said Valdez of her time as a student mentor. Today, she is an inspiration for many of the children at New Horizons, including three of her own siblings who are involved in the program.

After college, Valdez dreams of getting her master’s degree and becoming a physician’s assistant. She holds a staggering six scholarships, including the Foundation for Lee County Public Schools’ Take Stock in Children, a full-tuition scholarship designed to help hardworking, low-income youth escape the cycle of poverty. In addition to her studies, Valdez works a part-time job and helps her younger brother with homework as he follows in her footsteps as a dual-enrollment student.

Valdez is a shining example but hardly an anomaly. As a result of the holistic development facilitated by New Horizons, 100 percent of Super Teens graduated from high school in the past three years, and children at all grade levels have experienced life-changing academic improvements, social growth and character development.

Yoselin Guerrero, a senior at Bonita Springs High School who joined New Horizons as an elementary student, has also experienced a radical transformation in multiple areas of her life.

“When I joined New Horizons, I had a difficult time opening up, and speaking publicly was very hard for me. New Horizons helped me get out of my comfort zone,” said Guerrero, confidently speaking in front of a crowd of donors at the Grow Forward Gala.

Guerrero credits the programs at New Horizons and the volunteers who have worked with her over the years with helping her push herself academically, build strong friendships and grow her relationship with God. She is currently a dual-enrolled student at Florida SouthWestern State and a recipient of the Take Stock in Children Scholarship. Guerrero will attend FGCU next year and plans to pursue a career in the medical field.

“All of our students leave with a plan. Many of our elementary schoolers say they want to be a police officer, firefighter or a teacher, but after talking to our volunteers, their life expands,” said Cunning. “Volunteers have so much experience to share.”

The significant impact that New Horizons has on the lives of local at-risk students is made possible through generous donations. In the month of February alone, local supporters helped New Horizons raise over $400,000 within 24 hours during the “Give Where You Live” campaign, followed by more than $200,000 during the live auction and paddle raise at the annual Grow Forward Gala.

With the continued generosity of the community and dedication of program volunteers, New Horizons will continue to grow, expanding its reach and empowering at-risk children to become the leaders of tomorrow.