Twenty years ago, Estero was an unincorporated area of Lee County with few businesses and no coordinated “voice” for shaping its future. Much has changed in the last two decades, and the Estero Chamber of Commerce has been a constant influence.
This pillar of the Estero community started out as a political action committee but has evolved into a true advocacy organization for local businesses, offering multiple networking and educational opportunities each month.
“It is our hope to one day be accredited,” says Chamber Board President Judi Gietzen. “We are building the platform that will get us there.” 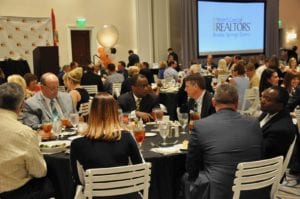 The Estero Chamber will celebrate its “emerald anniversary” during an Annual Luncheon on June 15. Along with presentation of the Person of the Year and Business of the Year awards, the Chamber will unveil a new logo and will hold a second release of its annual magazine to reflect a new brand identity, says Gietzen.
The Chamber also is launching the Founder’s Club to help support its continued growth. This program offers exclusive benefits and three years of “unlimited exposure” to members who join for $3,300 (billed over three years), supporting the newly opened Estero Chamber of Commerce office and visitor’s center at the Estero Executive Center on Chevrolet Way — the Chamber’s first real “home.” 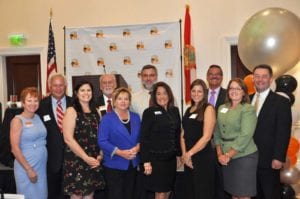 The Estero Chamber operated virtually for 15 years and has subleased various spaces over the last five. Now the Chamber finally has a place of its own, manned by one full-time staff member and a team of volunteers. There also is a conference center available for use by members. Soon, the Chamber plans to hire a full-time executive director as well, notes Gietzen.

The History
Chartered in February 1998, the Estero Chamber of Commerce launched with about 70 members as an offshoot of the Estero Civic Association. Under the direction of founder Meg Judge, a former Republican Party lobbyist from New Jersey, it was run like a political action committee.
“Meg wanted to make sure Estero wasn’t left out in getting funding for infrastructure,” recalls Debi Montenieri, who joined the Chamber’s Board of Directors in 2005. “She was quite capable of lobbying the Lee County Commissioners.” 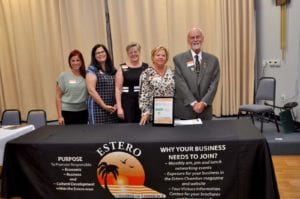 During the Chamber’s first 14 years, Judge successfully lobbied for major road improvements and preserve land purchases. The Chamber also commissioned Estero’s first Community Plan.
Those who sought shelter at Germain Arena during Hurricane Irma last summer can thank Meg Judge for lobbying to have the facility built to hurricane standards, adds Montenieri, who served as Chamber president after Judge’s death in 2012.
“She was the right person at the right time for Estero,” Montenieri says of Judge, a controversial figure whose relentlessness charmed some and irked others: “Meg was a diplomat. She could make you smile while she was telling you to go to hell.” 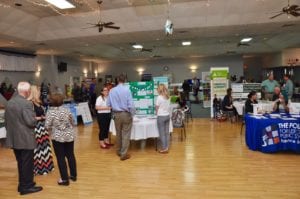 It was under Montenieri’s subsequent leadership that the Estero Chamber began to shift its focus, becoming less political and more attuned to the needs of local business owners. Her husband, Gene Montenieri, now serves as the Chamber’s CEO and Chairman of the Board. Since coming onboard four years ago, Gene has seen Chamber membership triple as new programs, committees and networking opportunities have been added.
“We used to have speakers at everything,” Gene Montenieri says of the shift. “While the events were well received, there was clearly a need being expressed that people wanted to meet other people to network and exchange ideas.” 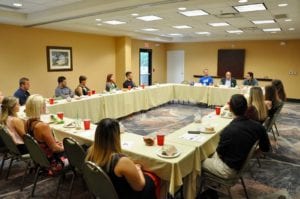 Annual events include the Celebrate Estero business expo and a nonprofit showcase during the spring, the June Annual Luncheon, a golf tournament in October and an annual holiday party. Proceeds from the Meg Judge Memorial Golf Tournament are used to fund $10,000 in annual scholarships for Estero students.
The Chamber also launched a Young Professionals Network last year. The Estero YPN is designed for those just starting their careers and provides opportunities for education, socialization and community outreach projects.
The Estero Chamber also is strengthening its relationship with the state and national chambers of commerce, Gietzen notes. The U.S. Chamber recently awarded the Estero Chamber $5,000 to implement Launch My Career SWFL, a resource website aimed at helping students explore potential careers in Southwest Florida. The Chamber hosted a free Career Day last March at the Embassy Suites Estero.
Chairman Montenieri also serves as Chamber liaison to the Veterans Florida Entrepreneurship Program at FGCU, which has launched 24 veteran-owned businesses in Southwest Florida during the last two years.

The Benefits
Many local business owners are beginning to see increased value in an Estero Chamber of Commerce membership. Joe Taylor, owner of Marketplace Title, first joined the Chamber in 2010 but says he is “newly engaged.” Taylor has stepped up as a Founder’s Club member and proudly displays the Estero Chamber logo on the front door of his business.
“The people who are now in leadership are driving me back to getting more involved,” says Taylor.
Smart Choices Healthcare CEO Barbara Saxton also is stepping up her engagement as a Founder’s Club member. She will join the Chamber board this month and plans to chair the Lunch & Learn Committee. Saxton has become a believer in the value of Lunch & Learn sessions, having landed one of her best clients through networking there.
“People like to do business with people who are committed to the community,” says Saxton. “The Chamber should be the ‘go-to’ for local businesses.”

Highlights:
Presentation by Emerald Sponsor: Lee Health Coconut Point
Unveiling of the new Estero Chamber of Commerce “brand identity”
Installation of new officers & board
Awards: Person of the Year, Business of the Year, Volunteer of the Year