Most people ride bicycles for enjoyment and exercise. Some bike competitively for sport. Ted Rudich has a very different reason.

“I train and ride expressly to raise funds in my community to support medical research,” explains the top fundraiser for the Juvenile Diabetes Research Foundation (JDRF) Southern Florida chapter. 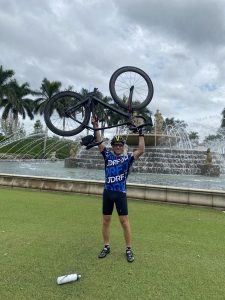 Exercise is merely a byproduct.

It’s called fundraising cycling, and for Rudich, it started years ago with the Pan-Mass Challenge bike-a-thon in Massachusetts, which he trained for in honor of his mother, who died from ovarian cancer. Through the years, he was able to raise $80,000 in support of cancer research.

He found a new cause when his son, Zach, was diagnosed with type 1 diabetes his freshman year in college. Now Rudich has put the same cycling energy into raising another $80,000 for JDRF, cheered on by his family and friends who have pledged their contributions in support of his rides.

The JDRF Ride to Cure Diabetes usually happens on Florida’s Amelia Island, but due to the COVID-19 pandemic, the organization encouraged cyclists to make their own routes and stay in their local communities. With no registration fee and no minimum fundraising requirement, each cyclist sets personal goals and determines the location and length of time they plan to ride — joining others around the nation and globe.

Rudich carefully planned a circular route beginning at Miromar Lakes, heading north to Fort Myers, then all the way down to Naples, to the ocean’s edge, then back home to Estero. The ride took about seven hours, and Rudich incorporated many local roads to reach his 100-mile goal.

“I found the most difficult part of the Fort Myers ride was planning the route,” said Rudich. “Otherwise, I’m accustomed to the long distance training and rides.”

For supporters of the mission who don’t bike, JDRF also organizes the annual Community One Walk, which happened virtually in 2020, similar to the ride, with participants walking in their own communities.

This month, JDRF will host its annual fundraising gala, virtually, on Feb. 26. The Hope Gala Telethon will include live and silent auctions. Rudich and his family typically buy a table at the annual gala, but this year, they’ll be tuning in from home.

“I encourage participation to support JDRF fundraising for T1D research and advocacy,” said Rudich, who serves on the JDRF board as advocacy team chair for the Southwest Florida market. “As major fundraising events, everyone can participate.”

Zach Rudich said when he was a young boy, he dreamed of being like his dad, giving back to his community. He watched his father do fundraising cycling for cancer research long before his own diabetes diagnosis.

“His selflessness, serving others and giving back to the community was special to me, something to which I could aspire and look up to,” said Zach.

His diagnosis came as a shock when he was in his first year at Indiana University.

“I was just a normal teenager when I was diagnosed with T1D, eating a bit too much pizza,” Zach said. “The critical nature of the diagnosis woke me to the healthier lifestyle required to accomplish my life goals.” 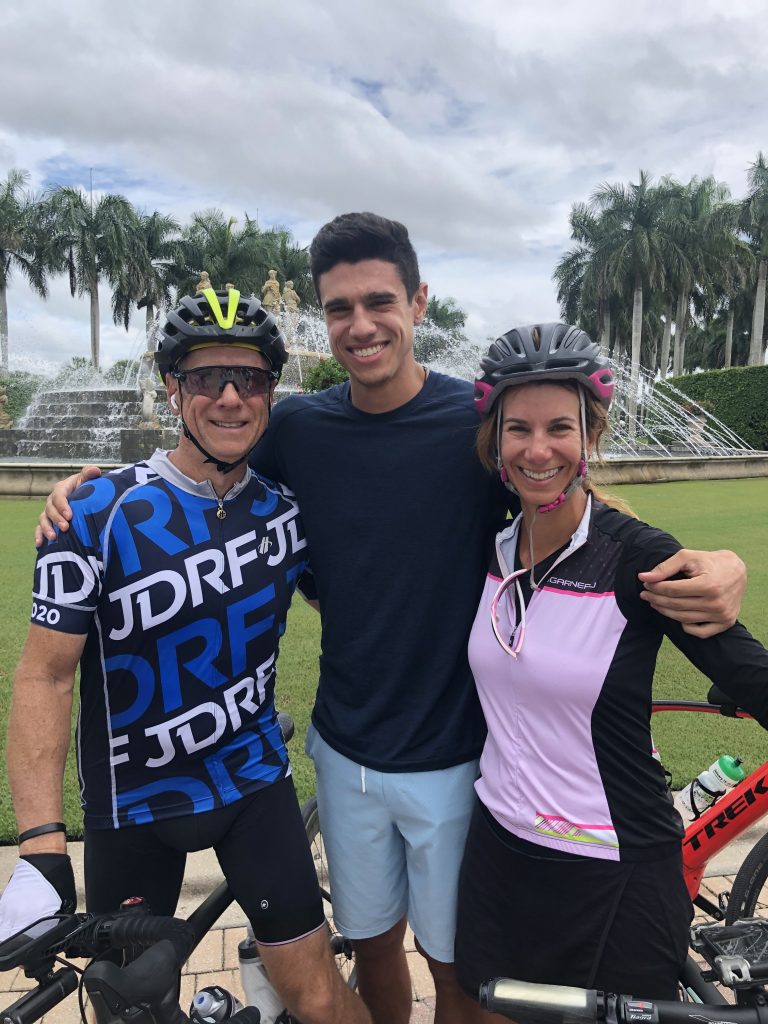 Excessive thirst and urination resulted in a medical emergency and Zach being rushed to the ER with a blood glucose level over 500 (70-140 is considered normal). His parents rushed to his side and stayed with him in a hotel until his insulin was controlled.

“I suggested he leave school and come home to Florida, but he was determined to finish,” recalled his dad. “He later transferred to Fordham University in the Bronx, where he has been a straight-A student pursuing his dream of working and living in New York.”

Due to COVID-19, Zach is completing his college studies online from home. He graduates from Fordham in May 2021 and already has a job at Morgan Stanley in New York waiting for him. He said the company assured him one of their core values was giving back to the community, and they support employee participation.

“Accustomed to my dad’s bike philanthropy, I looked forward to working for a company after graduation that would also have a charitable component.”

Zach and Ted Rudich now share the same mission: to support JDRF and the National Institutes of Health (NIH) in their research to prevent and cure type 1 diabetes.

“I look up to my dad and want to follow his lead,” says Zach.

He feels fortunate to use today’s advanced technology to assist with insulin control so he can lead a normal life including activities he loves, studies he enjoys, and foods that are best for him. Occasionally, his diagnosis may impact his choices when dining out.

Zach manages his diabetes with help from a Dexcom G6 continuous glucose monitoring system with tubeless Omnipod insulin delivery. This high-tech system continuously sends glucose numbers to a smart device and wirelessly administers the proper amount of insulin as needed.

The cost and the cure

Along with environmental issues, Estero is reaching out to its neighbors on several other regional initiatives. Managing diabetes is expensive. The Rudichs are fortunate to be able to provide for Zach’s high-tech equipment, but many other children and adults living with T1D are not as fortunate. Since type 1 diabetes is typically diagnosed in childhood, parents are left to manage the often exorbitant costs, explained Ted.

“The cost of managing T1D is prohibitive,” he said. “That’s why support from the community is so imperative.”

As a JDRF board member and mega-fundraiser, Ted Rudich is doing his part to help.

“The high cost of insulin and insulin support technology, the 25-percent increase in new patients over the last three years, and the need for research breakthroughs in treatment and prevention are not always in the newspaper,” he said.

There is some good news: congress recently passed a bill renewing support for the Special Diabetes Program for T1D research which amounts to $450 million in federal funding over a three-year period. 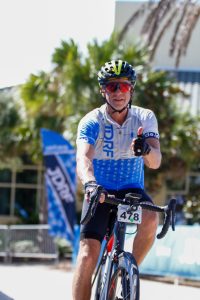 “While there is much research and progress on future advancements for finding a cure, there is no cure yet — but there is optimism for the future,” Rudich said. “There are clinical trials to create an artificial pancreas, as one example. JDRF advocacy has concentrated on the renewal of the bill, and their success is promising.”

The JDRF website states, “At JDRF, we’re leading the fight against type 1 diabetes by funding research, advocating for policies that accelerate access to new therapies, and providing a support network for millions of people around the world impacted by T1D.”

For Zach, managing the disease has had its challenges, but he leads a life filled with the normal activities of a 21-year-old.

“There are support groups in the community to help you get started on the right path,” he adds. “I lead the normal life of exercise, healthy eating and preparing for my New York plans in the spring with a new job and the activities I enjoy.”

For Ted, cycling remains much more than a source of exercise; he believes it may lead to saving lives through medical breakthroughs.

For further information about the activities of the Juvenile Diabetes Research Foundation:

To livestream the Hope Gala Telethon on Feb. 21, go to: https://one.bidpal.net/hopegala2021/welcome

Questions may be directed to Rebecca Thompson at 239-269-1457 or email rthompson@jdrf.org