development or improvement of the mind by education or training

Something new and unique is happening at Estero High School, initiating with the football team and rippling out to the community; fans who attend the games will see it soon. There’s a different culture that’s already begun to emanate which is unlike any that the guys on the gridiron have displayed before. 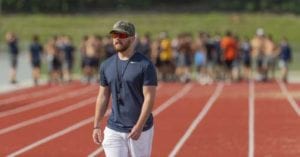 When the Wildcats take the field for the home opener against North Port on August 23, this team will manifest some major changes from previous teams that have donned the pads and helmets for Estero. There is a new track circling the field, a new scoreboard, and new uniforms for the players. But what will be more prevalent is the new outlook, the new mission, the new culture.

Are wins and losses important? Of course they are. That was a rhetorical question. But, the most critical thing is the building of character. Head Coach Darren Nelson is employing a 3D style of coaching the team: physically, emotionally and spiritually. The 3D mantra is not simply another coaching philosophy. It is a paradigm shift in purpose that leads to the outcomes desired — those that too often fail to be achieved.

“We want our kids to have a positive experience, to become successful on and off the field,” says the coach. “From a school and community standpoint, we want to be one — a family — not just a slogan, but a living breathing thing. It will be felt in the community.”

After a season that saw Coach Nelson thrust into the role at the last minute (following the abrupt resignation of the previous head coach), Nelson finally gets to lead in his own style and with his own convictions as he calls the shots for Wildcats Football. His vision extends far beyond the Friday Night Lights experience.

“It’s not about the coaches; it’s about the kids and their parents. It’s their program,” adds Assistant Coach Matt LeLievre. “It used to be selfish, all about everyone doing everything for football — cheerleading, band, ROTC, and dance doing their jobs for the players.” 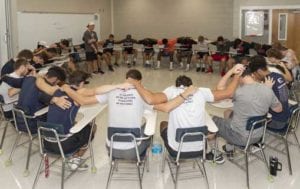 The team prays at the end of a Journey session

Now things are different. The team is reaching back out and reciprocating that support. LeLievre relays a moving example: football players showing up in their jerseys to an orchestra function, bringing band parents to tears.

When Coach Nelson stepped up to head the 2018 campaign, it was similar to years gone by at Estero High. Then, around the time of the season-ending banquet, he was finally able to sow seeds for the new vision he had held in his mind. Such a radical shift in ethos was something that could have scared him to try. But, it didn’t. He knew this could be something special.

“If we didn’t do something different, past results would be the same,” asserts Nelson. “We’re not afraid to fail. We believe in what we’re doing. We’re leading with our hearts. Wins will take care of themselves.”

Players soon realized a new system was afoot. It began with 5 a.m. workouts to find out which players were committed; spring workouts were instituted, as well. Coaches candidly talked with the team about how things would change. 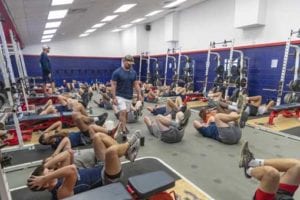 The coaching staff is intent on growing boys into men of morale, molding them to be a part of something bigger than themselves. They ask the players to be authentic, make the right choices in daily life, show humility, attain a 3.0 GPA, and so much more. In turn, the coaches and staff promise to provide an environment in which team members are given the opportunity to fulfill their highest potential as young men, students and football players.

“The players have bought in,” says Sage Haislip, a junior who plays both quarterback and linebacker. He’s thrilled about the new concept. “We’re holding each other accountable. We’re totally committed, all in.”

Aiden Thompson, who will be a senior free safety for the Wildcats, concurs. Last season, he was airlifted to a hospital after taking a huge hit during one of the team’s games. His career could’ve ended that night, but he’s back with a sense of exuberance, and he’s excited about the change he sees in team morale.

“I think it’s a lot more positive now,” says Thompson. “We’re practicing harder; there’s a lot more energy. It’s how a football team should feel. There’s a clear goal, a clear understanding as to what you’re supposed to be doing.”

A large component of this new team dynamic comes from the spiritual aspect. The staff holds open discussions, and they pray often. During “journey sessions,” they talk of love, manhood, social skills, and much more. This summer, the team joined with a few other Southwest Florida football programs to participate in a Fellowship of Christian Athletes (FCA) camp on the campus of Florida Gulf Coast University. The optional camp was three full days of football and faith. 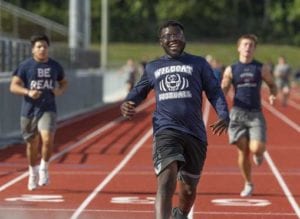 Bladiny Herard and teammates use the new track during summer practice

The squad has engaged in several other team-bonding activities. They went on a paintball expedition, they had a chili cook-off, they’ve had team breakfasts and attended a “Back to the ’80s” school play together.

And back on the field, the coaches report a great summer of work. They’re seeking an aggressive, creative, versatile and dynamic style of play. They’ll look not so much to defend, but to attack the opponent. And they’ll play fast. It will be noticeably different than last year.

Even so, the story isn’t wrapped up in “x’s and o’s” or schematics. This is a tale of culture.

Listen to Coach LeLievre’s inspiring words to the incoming freshman: “You are the first true class for us. It’s fresh on fresh. When you guys end up reaching out to us in the future, it will be emotional, like a little heaven on earth.”

Coach Nelson turns his thoughts to the seniors: “My hope is that they will have the best experience they’ll have had in their four years in high school. They can be the ones who create a culture that will be looked back on 20 years from now — the ones who started a legacy.” 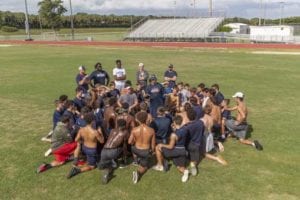