Joseph Cofield, retired United States First Sergeant (United States Army), retired public school educator, James Madison Fellow, and Veterans Florida Entrepreneurship Program Graduate acted upon his dream and vision in March 2014. As the 2019 New Year starts, Cofield is about to celebrate on March 15, 2019; the five year journey to put a copy of the United States Constitution booklet in the hands of fifth grade students across the entire State of Florida.

Those who have come in contact with Cofield at any stage of his life know for sure that he “Dreams Big” and “Believes in Faith” along with high work will get any mission accomplished. When few believed the mission could be accomplished but Cofield just draw more determined carry his dream and vision of the fifth grade students across Florida having their own personal copy of the United States Constitution.

Why would a person invest his personal fortunes and give up everything he owns in order to accomplish what seems an impossible mission? 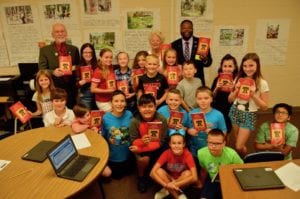 Cofield is not only driven by his passion for the United States Constitution but his belief that citizens owe it to the youth and next generation to keep our “Republic” strong. His action and dedication to the fulfillment of his “Dream” can be seen from the moment he took upon this journey as a one man operation to gathering support along each step of the process.

In 2015, Cofield completed 27 miles (representing the 27 Amendments to the Constitution by running six miles and cycling twenty one miles) in each of the 67 counties. Cofield visited each of the 67 public schools district and interacted with the superintendents/school officials along the local citizens in each of the 67 counties across Florida. His journey covered 1,800 miles while covering the entire journey at his very own personal expense.

Cofield is very quick to note even before you get to the United States Constitution one must read carefully that in the other important document the Declaration of Independence at the ends states, “We mutually pledge to each other our Lives, our Fortunes and our sacred Honor.” Those are not just words for Cofield but clearly his core belief that “The Declaration of Independence was the promise; the Constitution was the fulfillment.”

Upon completion of the “Journey Across Florida” April 2015 – October 2015, Cofield realized it was going to take a team to complete this mission of getting those Constitution booklets to the fifth grade students. Therefore, he created the Constitution Project, Inc. in 2016 and formed a small team while working even harder to fulfill the dream.

Success started to come slowly but only getting Constitution booklets to those deserving fifth grade students in the entire 67 counties/school districts would be good enough according to Cofield. Therefore, I went out searching for service organizations and individuals who would assist. He able to get support from Rotary Clubs, Veterans of Foreign Wars, American Legions, and Daughters of the American Revolution. Even that was not enough to get enough booklets to the entire 200,000 deserving fifth grade students.

Cofield would not let us even as the mission started to increase to 50 percent (50%) the following year to reaching 90 percent (90%) during the 2017 – 2018 school year. While others felt this was good enough Cofield dug digger and continued to invest his personal funds and reach out to other service organizations such as the Kiwanis Clubs and others who shared his vision for getting the resources available in order to put our youth in the best position for total success.

Joseph Cofield stated, on March 15, 2019, he will be inviting everyone in the sound of his voice and those far away from his reach to come to Keiser University to celebrate the accomplish of the mission when finally 100% of booklets can be found in each of the 67 counties/public schools districts across Florida.