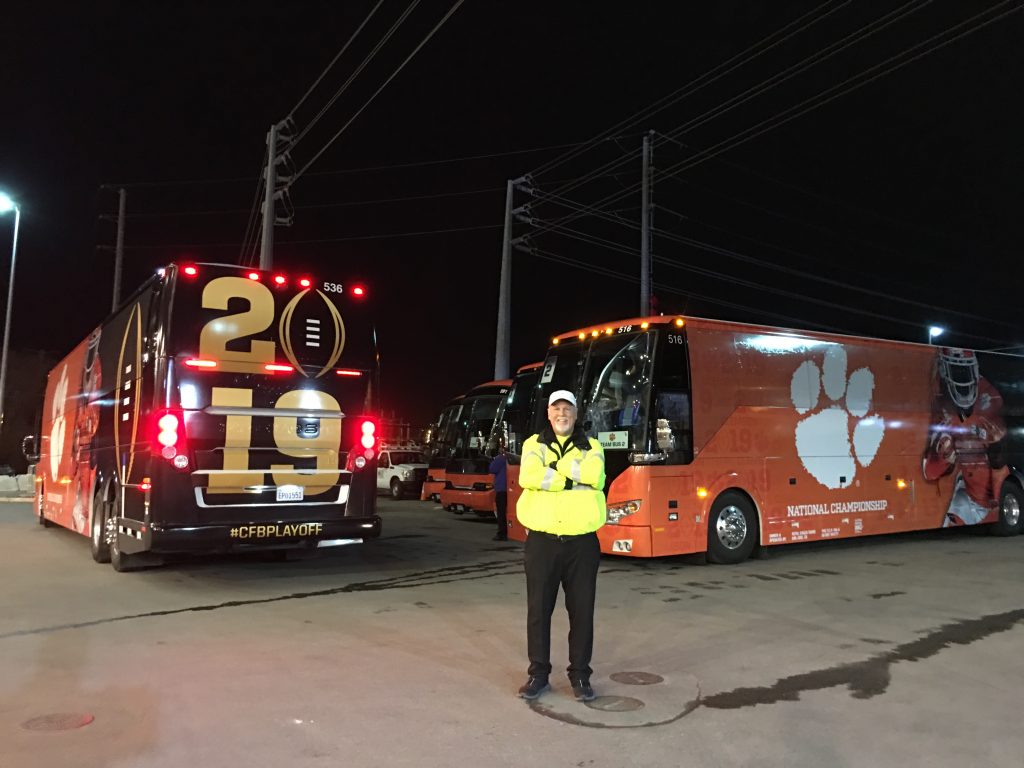 When Kevin Van Duser speaks to local students with the Fellowship of Christian Athletes, he often tells stories of interacting with some of the biggest names in the National Football League while working at Super Bowl events throughout the past three decades.

The awed student athletes always ask one question: “How did you get that?”

It’s a long and fascinating story, dating back to Van Duser’s days as a high school track coach who created an innovative team fundraiser by connecting with the Miami Dolphins. That spawned a relationship with the NFL leading to his current position as the Super Bowl’s group coordinator for systems and venue transportation needs.

When the Estero resident works Super Bowl LV in Tampa on Feb. 7, it’ll be his 27th Big Game.

“The staffing has been cut back by one-fifth this year, but they asked me to come back,” said Van Duser, referencing cutbacks the NFL has made due to the pandemic.

Working with the SP Plus Corporation – the same company that runs parking at Southwest Florida Regional Airport – Van Duser has given golf cart rides to some of the NFL’s most powerful people. Those include former and present commissioners Paul Tagliabue and Roger Goodell; former coaches like Miami’s Don Shula and Tampa Bay’s Tony Dungy; former players and now broadcasters Phil Simms and Boomer Esiason; and current players like New Orleans quarterback Drew Brees and Houston defensive lineman J.J. Watt.

He also has helped guide visitors around a one-million-square-foot extravaganza called “The NFL Experience” (now the Super Bowl Experience), an annual event held in conjunction with the Super Bowl since 1992. Additionally, he’s worked the Pro Bowl, College Football Playoffs and other football events, along with a pro golf tournament and his favorite, the Wounded Warrior Games.

“They served our country and have no legs or arms, and I’m watching them play volleyball,” he marveled. 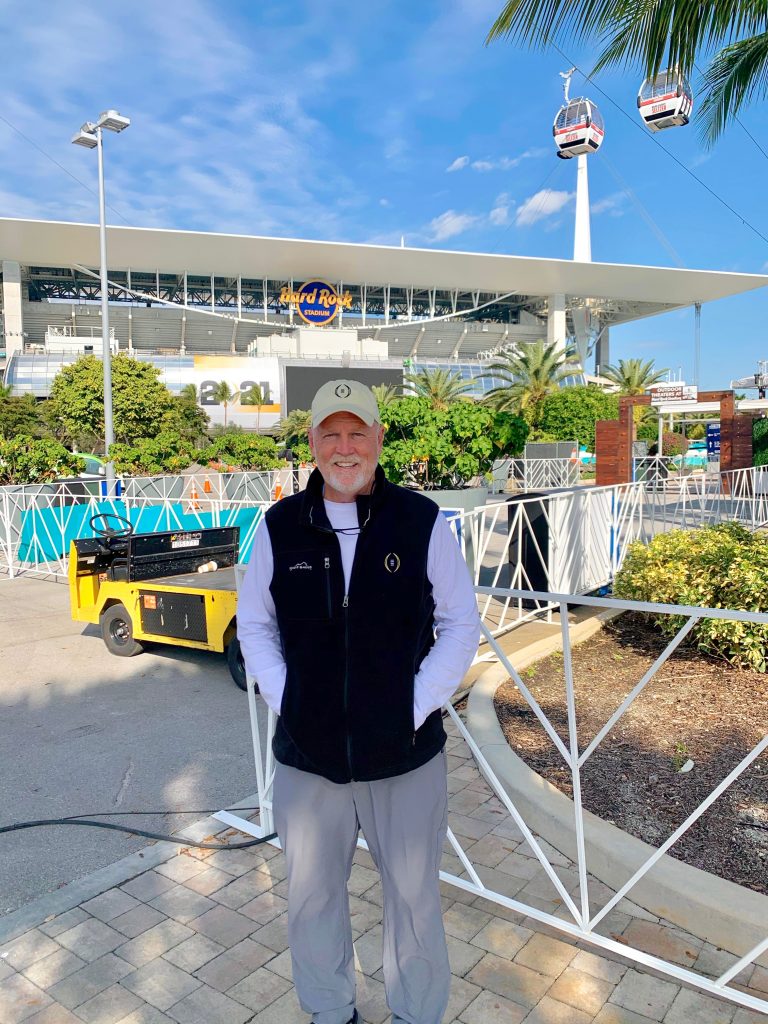 Kevin Van Duser at the 2021 NCAA football championship in Miami

The value of leadership & hard work

Van Duser answers the youths’ question this way: He earned this position by being a leader, being proactive and being a hard worker for his employer.

By being a leader, Van Duser tells them he’s been able “to go to a lot of places and meet a lot of people.”

By being proactive – finding a way to pay for his track athletes’ costs to compete at the state meet – he latched onto a job with the NFL. And by working hard, he’s been able to keep his job with the NFL for nearly three decades.

“Every time I fill out that invoice, I tell them I appreciate the opportunity they gave me,” Van Duser said. “They can get younger people or people they can pay less, but they keep hiring me.”

When Dallas Cowboys owner Jerry Jones arrives at the Super Bowl and sees Van Duser, he says, “There’s the coach!” And ‘Coach V’ sometimes needs to discipline the owner “because he wants to park his bus in the front.” 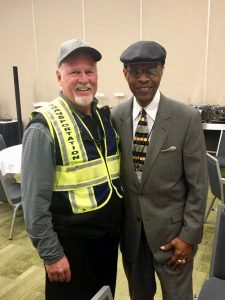 One of the players Coach V has connected with is Las Vegas Raiders quarterback Derek Carr. After Carr reached his location for autograph signings, he asked Van Duser why he was called “coach.” Van Duser told the famed quarterback he was a former high school track and football coach and now works as a character coach, directing Fellowship of Christian Athletes (FCA) programs in Lee County schools. Carr put his arm around Van Duser and said, “Let me pray for you.”

How it all started

“Needless to say, we spent a LOT of time together,” Kramer said.

When members of the track team qualified for the state meet, school officials told them they had no money to pay for travel expenses. They started a booster club.

Van Duser thought big and contacted the Miami Dolphins, who told him to bring a group that would help park cars at games. Van Duser’s group of 40 did such a good job, they were invited to work at the 1995 Super Bowl. 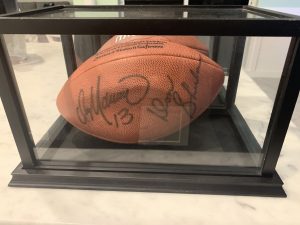 When Van Duser’s boss got sick, he worked with high school officials from Broward County to run half the parking. He impressed Commissioner Tagliabue, taking him to one of the lots and explaining how the transportation process worked. They also talked about family.

That started a run of covering The Big Game every year.

A role model for youth

Kramer said he could talk for days about Van Duser.

“He is a gift. The amazing thing about Kevin is this: He authentically lives his faith every day. By this, I mean he loves and cares for those around him, often before himself,” said his longtime friend.

In 2000, Kramer – who led Naples to two state championships and more than 200 victories in his 22 years before retiring in 2019 – called Van Duser, an ordained pastor, to help organize church youth groups. 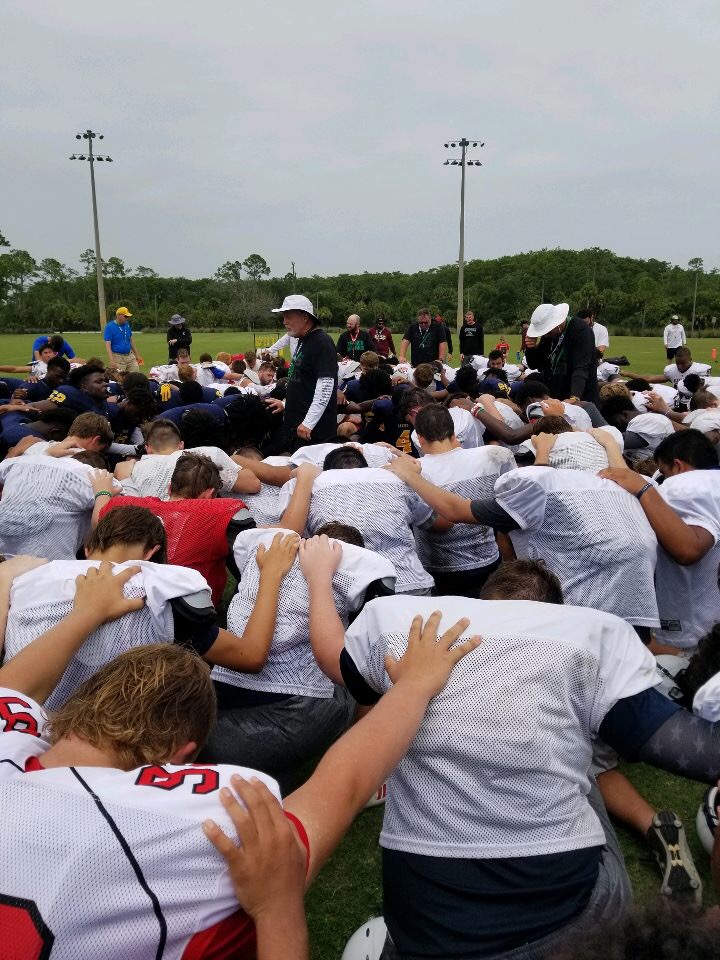 “I have never heard him use foul language or condemn folks, even when provoked to do so. Kevin told me that his Christian faith calls him to service and that he would trust God for the outcomes,” Kramer said.

“As soon as I met Kevin and his wife, I knew they were leaders and influencers,” Rollins said. “I have observed them over the years making a difference in the lives of students and young people. They have a passion for students and helped so many realize their full potential.”

Van Duser started a sports outreach program that grew to 28 football teams before he handed off its leadership in 2014. Besides his current work with Lee County FCA, Van Duser works with youth pastors in an FCA program called Grab Your Cleats, where young athletes are mentored by high school teachers, volunteers and character coaches.

In November, he was part of a Fields of Faith event in Estero; and in December, he worked with FCA officials to deliver food, gifts and clothing to the needy.

It’s ironic. By looking to help youths, Van Duser has been able to carve a niche for himself, which led him to travel to places like San Francisco, Dallas, New York, New Orleans, Atlanta, Minneapolis, San Diego and Houston for one of the biggest sporting events in the world.

“The cool thing is, it’s been a blessing,” Van Duser said. “By trying to find something for kids to go further in their sports, it opened a lot of doors for me.”