Ah summertime…the perfect time to explore, not only new places but new foods! Dive in with all your senses and discover bold flavors at quirky, casual eateries close to home. Each has its own story to tell and a unique niche to serve.

Yep, you read that right! Owners Doug Miller and Amy Eldridge know you’re going to cheat on your diet, and when you do, make it worth the calories! FK Your Diet is homestyle cooking at its best. And while the provocative name has garnered its share of criticism (as well as fans), there’s more going on here than first impressions would suggest. 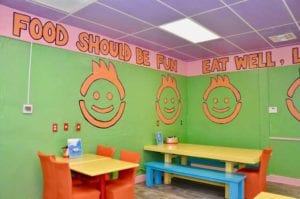 “FK” is a double entendre with its more endearing meaning being an acronym for “foster kids.” Prominently painted along the neon walls, just above the welcoming smiley faces, is the restaurant’s mission: “Eat to Give.”

A former foster kid himself, Miller is letting his passion for comfort food fuel his compassion for kids in foster care.

FK Your Diet employs foster kids, people with disabilities and struggling adults with barriers to employment. It’s also a safe place to hang, where people of wildly different social classes mingle. Everyone is fed, regardless of their ability to pay, including the homeless.

“We create a culture and a community here,” says Eldridge.

The restaurant also gives generously. When Miller hears of a need — whether school supplies, new shoes, a holiday dinner or a graduation party for local foster kids — he springs to action. In the first six months since its opening, FK Your Diet has donated more than $50,000. 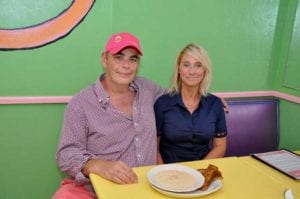 Being tossed to 13 different foster homes as a kid was rough, and Miller could go on for hours about how the system is broken. But if there’s a bright spot, he’s learned to be self-reliant — and learned a few good recipes along the way.

“As a rule,” he says, “foster moms are terrible cooks.” But every now and then, one would make an “out of the ballpark” meal. Those are the dishes Miller has perfected and placed on the menu at FK Your Diet.

Take for instance, his bestselling Biscuits and Gravy. He makes it the way the Bowdens did; this foster mom made a mean sausage gravy chock full of Jimmy Dean sausage, while the foster dad liked his biscuits dense — dipped in butter and fried on the grill. It’s served with fried eggs on top and a side of hand-cut, fried potatoes.

You won’t find health food on the menu at FK Your Diet, but you will find a story behind each hearty, home-cooked meal. The only complaint Miller says he gets is this: the portions are too big!

“He shows his love through food,” says Eldridge.

As the Miromar Outlets location of Naples Flatbread celebrates its 10th anniversary this fall, there’s something new and notable on the menu. Guests will see several items highlighted with the “Blue Zones Inspired” checkmark, indicating healthy (and great tasting) plant-based options. 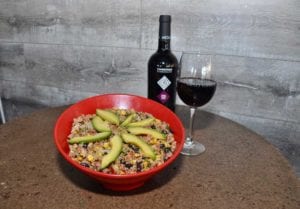 In case you’ve missed it, Blue Zones is a national movement aimed at helping people live longer and healthier, and Southwest Florida is among the first nine regions to dive in (see bluezonesproject.com for more details).

For Naples Flatbread owners Ralph and Palma Desiano, the Blues Zones lifestyle was a natural fit, aligning well with the healthy eating concept already in place at their three restaurant locations. So in 2018, the popular Miromar Outlets eatery became the first Blue Zones Certified restaurant in Estero.

“From its inception, Naples Flatbread was designed to be a ‘healthier than normal’ restaurant,” says Ralph. “It’s a pretty simple menu. Folks feel good about coming to us; they feel healthier coming out of our restaurants.”

However, a few changes were needed to become Blue Zones certified. Salt shakers were removed from the tables (they’re still available upon request), and fountain drinks were taken off the kids menu, replaced by milk. Other things were added: more vegetarian and vegan options, like the meatless Mediterranean flatbread, as well as several dishes starring the “super grain” quinoa.

The new Southwest Quinoa Bowl has proven popular. Lettuce is topped with spicy quinoa, layered with avocado, black beans, corn, peppers, onion, tomato and pico de gallo. Spicy quinoa is also the base for a meatless taco and meatless chili.

Ralph has made it a personal mission to get people — particularly meat-eating “he-men” — to try the quinoa. They typically respond in pleasant surprise at the flavor.

Another popular addition to the menu is a Sardinian red wine, Primo Scuro, which boasts the highest amount of Resveratrol, a plant compound which acts as an antioxidant. Its health-boosting benefits show promise in preventing or reducing the severity of many diseases.

Naples Flatbread is proving that eating healthy doesn’t have to be bland or boring. The restaurant’s menu contains 15 Famous Flatbread options, a range of starters, soups and salads, several pizzas, calzones and sandwiches.

When Chris Covelli came to Florida Gulf Coast University on a golf scholarship in 2005, it had just 4,500 students; construction was just beginning on both Coconut Point Mall and Gulf Coast Town Center. By the time he graduated in 2009, FGCU’s population had doubled, but there were still only a couple of options for satisfying those late night munchies so common to college students up late studying (or partying). 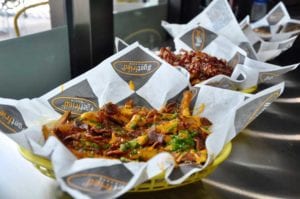 It wasn’t until a few years later, after a trip to Amsterdam, that Covelli conceptualized what has become a rapidly growing franchise. While traveling abroad, he noticed the prevalence of french fry cafes and began to wonder why Americans, who clearly love their fries, had nothing similar.

He put his FGCU business degree to good use, opening the first Get Fried fry cafe in his hometown of Buffalo, NY, in 2015. Its proximity to Canada also fueled demand for poutine, a french fry dish originating in Quebec, topped with cheese curds and brown gravy.

Within a year, #getfried began franchising. And in March 2019, Covelli was thrilled to open the 13th location right next to his alma mater in the new University Village Shops, which has an access road coming directly from the FGCU campus and is within walking distance of student apartments.

“We knew it would be a killer location,” says Covelli. “It’s a special location for me personally. I love Estero.”

He had been searching for the right franchisee and ultimately found a dynamic combo in John Paul “JP” Figaro, who formerly worked on Wall Street, and Mike Pica, owner of Mario’s Meat Market and Deli in Fort Myers. The two have committed to opening seven #getfried locations in Southwest Florida.

The menu features seven Topped Fry Baskets which are big enough to be shared or eaten as a meal. Favorites include the Southern Comfort, topped with barbecued pulled pork; Texas Cheese Fries, topped with bacon and drizzled with cheese; and the “716” topped with shredded chicken and buffalo sauce. Guests also may customize a basket, choosing from six styles of fries and over 20 sauces.

“We hand-cut fries every day and make everything to order,” says Figaro. “It’s gourmet quick serve, rather than fast food.”

While #getfried caters to the college-kid munchies, it’s also family-friendly and dog-friendly, adds Figaro. In addition to fries, the menu includes burgers, chicken fingers, milkshakes and more. Delivery is available through the Bite Squad app.