Neither a major recession nor a global pandemic could alter the upward trajectory of The Laser Lounge Spa. Since opening the Estero anti-aging business in 2009 — amid the Great Recession — owners Jonathan and April Sigg have seen nothing but growth.

They franchised the business and now have 10 locations in Southwest Florida and elsewhere in the nation. Persistence has been the key. 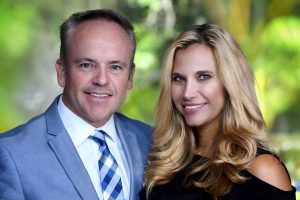 “People couldn’t understand starting a new business during a recession,” said Jonathan. “My research confirmed that women want beauty, regardless of recessions, and continue to spend money on beauty products and services. The same holds true during the pandemic. The demand for beauty services remains high.”

Prior to opening The Laser Lounge, both Jonathan, a certified physician assistant, and April, a registered nurse, worked in a local hospital.

“The recession came at a time when we were feeling a bit burned out,” Jonathan said. “We began to look at other helping occupations.”

The Siggs had long been interested in skincare and aesthetic services. Opportunity struck when Jonathan’s laser hair removal specialist closed his business.

Jonathan made a deal with him, in a restaurant, writing on a napkin, to rent the $25,000 laser machine with full payment to come later if his plan worked.

Because other failing businesses during the recession created excess retail space, Jonathan talked an Estero mall into free rent in exchange for bringing in foot traffic. He drew so much business to his fledgling startup that the spa soon had to move to a larger facility. His sole source of capital for spa renovations was his $20,000 line of credit on his Home Depot card.

In those early days, the Siggs put up flyers everywhere.

“We knocked on doors,” said Jonathan. “Our advertising was grassroots and word of mouth.” 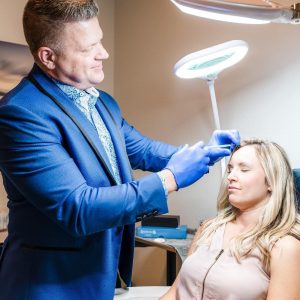 Today’s Estero location for The Laser Lounge Spa sprang from transformation of a model home that wasn’t selling. Jonathan’s initial proposal to the realtor received a firm “No!” Not one to give up easily, Jonathan approached the owner directly and made a sweet deal resulting in the eventual purchase of the property off of U.S. 41 north of Broadway Avenue, now the spa’s headquarters.

The Siggs are committed to providing a growing list of high quality, medical spa services at an affordable cost. Even with increased competition, business has grown quickly.

“We often say, ‘All our clients are beautiful, and beauty doesn’t have to be expensive,”’ said Jonathan of the med spa’s motto.

Of course, cost is a matter of priorities and perspective. If a woman wishes to permanently remove underarm hair, as an example, it usually takes about six laser sessions for a total of $499, in exchange for never shaving or waxing that area again except for a touchup, which is about $25.

While 90 percent of the spa’s customers are female, the male minority may feel comfortable because the impetus for the business was Jonathan’s own quest for hair removal.

“I’m not exactly a metro male, but I care about my appearance,” he said.

He added that someone seeking a rose-petal-and-cucumber spa is not their typical client.

“We are not a fluff-and-buff day spa,” Jonathan said. “We want to accomplish something lasting.”

Full-time physician assistants and skin care specialists, certified for their areas of expertise and under a medical doctor’s supervision, use cutting-edge technology and the most effective products and treatments offered in the medical spa industry, he said. Everything is customized to an individual’s needs. Potential clients are offered a free initial consultation to chart the right treatment plan. Questions about treatments are welcomed and answered.

“I have been a client for many years,” said Lynda Waterhouse. “I feel that they try to bring out the best in you, to address what bugs you.”

She described the spa’s atmosphere as professional yet “family-like.”

“I trust their judgment,” said Waterhouse. “You don’t leave saying, ‘What did they do to me?’ But rather, I feel freshened up. My eyes are brighter – it’s a combination of little things from facials to eliminating spider veins.”

Waterhouse said a professional appearance is important in her career. She wants to look fresh and natural, not overdone, especially in these days of video conferencing, where all eyes are on the face.

Popular treatments include removing blackheads, sun spots and unwanted body hair, as well as Botox and other injections to reduce wrinkles.

Jonathan recommends potential clients review Google’s reviews and do sufficient research to be confident they are receiving professionally administered treatments, not going somewhere that’s an add-on to another profession.

Laser Lounge client Deborah Paulin said she has explored many other medical spas and surgeons in the past, but she calls the professionals at The Laser Lounge Spa “artists.”

“Everyone working there has a specialty, and that’s what they do all day,” said Paulin. “Jon does filler and Botox and is an expert. They offer the full range of services with an expert providing each, fully knowledgeable and enjoying what they do. It’s a career, not just a job.” 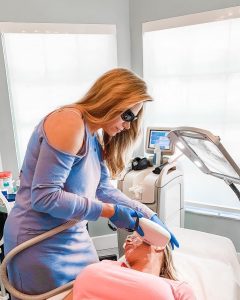 “The massages are in the top one percent, in my experience,” added Paulin.

Happy customers like Paulin and Waterhouse have helped grow the reputation of The Laser Lounge Spa. Along with seven Florida locations, franchises have opened in three other states.

Recently, The Laser Lounge Spa was invited to open a location in the world headquarters of Merz Pharmaceuticals in Raleigh, N.C., one of the largest providers of medical spa products including Xeomin injections and Radiesse dermal fillers. The new Laser Lounge location will meet the needs of about 300 employees and will be a showroom, model and learning facility for visitors from around the world.

Jonathan is glad he didn’t listen to the original naysayers when he decided to rent a laser hair removal machine and build an aesthetics business on a line of credit during a recession. Growing a successful business takes persistence — and it has certainly paid off.

When the Siggs can get away for some family time, perhaps in the summer, they like to travel.

“With two children in college and one at home, family is important,” said Jonathan, who is proud to run a thriving Estero business for so many years. “We are active in the community and our local church. We feel blessed.”