The landlord and landlady of the British Open Pub, Bernard and Ann Nabbs, have a fascinating story. Although their pub has been going strong in Bonita Springs for the last 18 years, previously the Nabbs were constantly on the move: managing 9 different restaurants and living in 35 different homes! 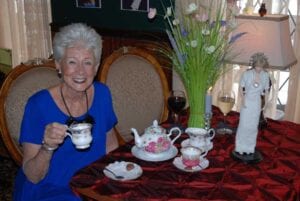 Bernard had come to the U.S. with his parents – to Cleveland from Wolverhampton – as a tool and die maker. Ann worked at Ford in Liverpool and was an early and strong advocate for equal pay for women. She also dated George Harrison, which may explain the Beatles memorabilia decking the walls of the current Pub! Whilst visiting the great city of Liverpool, Bernard met Ann. Sometime later, on a Friday evening, as they sorted and allocated their pay checks, they found they were left with the princely sum of 5UKL (about $7). Should they go to the local pub or cook in? They chose the latter, bought a “chip” pan from the local supermarket and some lard — and thus started a commitment to prepare top-notch British food. Soon after, they decided to go to America and eventually arrived in Clearwater, Fla. Ann gained the support of the British Biscuit Club, largely made up of “war brides.”

The golf connection was incorporated into the restaurant’s name in Sarasota with the original British Open Pub, serving both American and British food. In time, they transferred this concept to the City of Bonita Springs during its formative early days. Ann recalls appearing before three town hall meetings and the board of the new city to plead the case for a liquor license and a patio. She and Bernard persisted with their “Churchillian spirit” and the Pub opened as an immediate success. “Word of mouth” drives their success, particularly in the evenings when it is often packed. One can smile as a picture of Churchill looks down and advises: “Stay Calm and Carry On.”

It is very much a family run business: their son, Ian, manager Cathy and staff members Ryal, Marilyn and Don have been there from virtually the start and are all proud of the food, the drinks and the reputation they have built. The owners’ grandson runs the kitchen to ensure recipes from Ann’s grandmother (from the 1800s) are meticulously replicated; this requires a six-month training process for new hires. 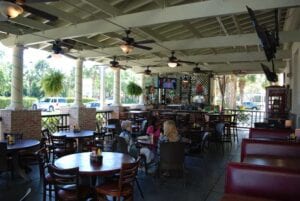 All food is freshly prepared from scratch. Over the years, Cathy has developed new soup recipes and cocktail recipes with “secret” ingredients.

I interviewed several guests to understand the appeal of a British pub in Florida. I was given a consistent set of answers: excellent food, friendly staff and great cocktails.

American specialties include a range of “sand wedges” (a golfing play on the word “sandwich”), salads, flatbreads, wings and more. The British food is definitely at a higher level of quality and from a more extensive menu than what one would experience in the U.K. itself (take my word, I’m from Wales) and comes with excellent American-style service. Soups and sausage rolls make up the most popular starters. The “mains” are normally served with the best chips in Southwest Florida: crispy on the surface and soft and tasty on the inside. Weekly specials are outstanding: lamb shanks, Indian curry, steak & kidney pie, etc.

To add further character to the place, the staff are convinced that a ghost occupies the Pub! Things get moved mysteriously, and sometimes the staff feel tripped up…maybe one of George’s exes? Or, is it the spirit of the armored knight that stands guard at the entrance door?

For a truly unique dinner or lunch experience, visit the British Open Pub for great food and drinks, representing both sides of the Atlantic, and an extremely warm, welcoming atmosphere. As the sign above the door says: “Come as a Guest; Leave as a Friend.” 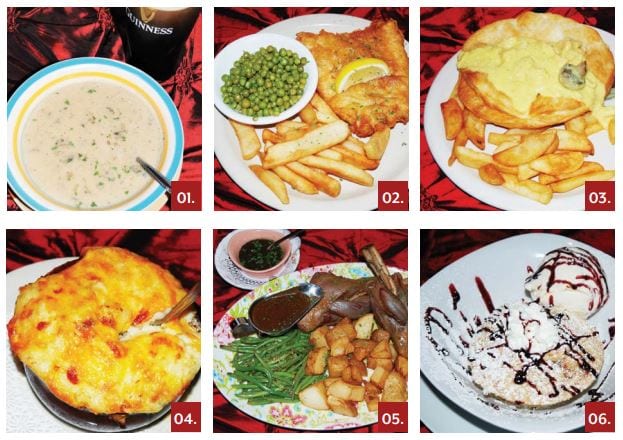