Who knew a place that’s been around for nearly half a century could deliver such surprising epicurean delights? Charley’s Boat House Grill & Wine Bar may be well known on Fort Myers Beach, but Estero, it’s time you knew, too! 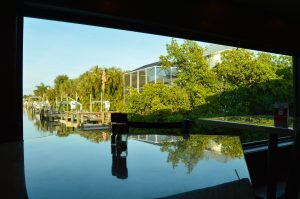 This restaurant’s roots go back to 1974, opening first as “Charley Brown’s.” In 2002, the authentic boathouse was converted into an Old Florida steakhouse. Fresh-caught seafood was later added to the menu of this canal-side restaurant.

Premium quality steak and seafood has kept customers coming back for decades. But recently, there have been remodels, menu upgrades and new talent in the kitchen.

We were seated in the dining room with the best view in the house, overlooking the water, where you might see a manatee or dolphin if you’re lucky. Prior to the addition of this dining room spanning the canal, the place we sat was a boat dock where patrons arrived by water.

Charley’s “famous” prime rib has been the big draw for the last two decades. Aged in-house and hand-cut, this savory cut can be ordered in various sizes, depending on appetite. This well-marbled steak is served classically with horseradish creme and au jus. You just can’t mess with perfection.

But Charley’s new chef, Jared Liedel, is bringing his culinary creativity to many other menu items.

“I like to stand out and be on the edge,” he says.

He delivers sweet-spicy punch to calamari with Thai chili sauce and dresses up grilled grouper with purple potato puree. And then there’s his grandmother’s super steak rub—a secret blend she taught him as a tot —and he won’t share it with anyone.

An avid hunter, Liedel knows a thing or two about preparing a tasty flat iron steak, ribeye or bone-in pork chop. He grew up on Michigan’s Bois Blanc Island, a 12-by-six-mile island on Lake Huron, where hunting and fishing are the main pastimes—not to mention a good way to get dinner in a place with few businesses and only 60 year-round residents.

Gazing upon Liedel’s youthful face, it’s almost hard to take him seriously when he says he was educated in a one-room schoolhouse and didn’t have a car—the island’s

only roads aren’t paved or maintained. Bois Blanc has a ferry, but most people get in and out by boat or personal aircraft.

“It’s like going back in time,” he says of the island lifestyle.

While there’s no wild game on the menu at Charley’s, Liedel says, “Nothing beats fresh venison, rabbit or pheasant.”

Growing up with such close connection to nature, Liedel highly values sustainability. He likes to keep it local when he can and makes sure seafood is not only fresh but also sustainably sourced. On the Gulf, local means serving fresh-caught grouper and other “fish of the day” specials.

Although Liedel trained at Great Lakes Culinary Institute, he took a hiatus from cooking for a few years to try his hand at a music career. You may hear him singing country songs in the kitchen!

And that’s not his only hidden talent. He’s also an accomplished ice carver!

Southwest Florida doesn’t offer as much ice to carve as northern Michigan, so Liedel is back to carving steaks. He even uses the famous prime rib to make shaved steak sliders.

“We had shaved prime rib whenever the family got together,” reminisces Liedel, who clearly values family connection.

Now it’s his job to create culinary delights for other families to share around the table at Charley’s. He’s brought in his trusty sous chef, Dixon Hernandez, to help him continue innovating and elevating the menu.

“We’re starting to dabble in molecular gastronomy,” Liedel said. “We’re thinking outside the box. We want to be different and take it to the next level.” 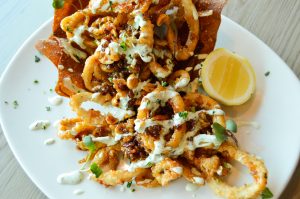 Calamari: You’ve never had calamari like this! The classic seafood starter gets an Asian twist with Thai chili sauce and peanuts. Add bacon and banana peppers, and the complexity intensifies. Finished with cilantro cream, this unique calamari app is bursting with spicy-sweet flavor. 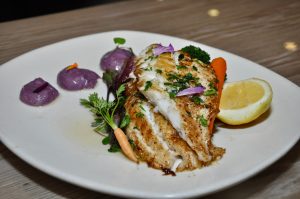 Grilled Grouper: Fresh from the docks, the grouper can be ordered grilled or blackened and served with lemon-pepper or garlic butter sauce. This succulent seafood dish is attractively paired with purple potato puree and tender baby carrots. 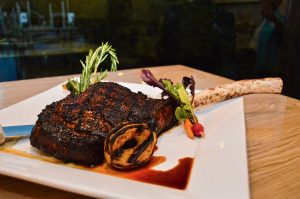 Aged Tomahawk Black Angus Steak: This off-menu stunner is a special order and is sure to impress as it’s brought out with its giant bone protruding, declaring: Get ready for a big-meat feast! The 48-ounce tomahawk is aged in-house 38 days, and the chef’s secret spice rub creates a beautiful crust. This oversized, sharable steak is served with a side of baby zucchini and tricolor carrots. 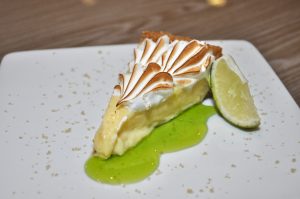 Classic key lime pie gets an upgrade with some sweet, foamy merengue on top. Light merengue terrifically tops the rich and creamy lime custard for a scrumptious ending to the Charley’s Boat House feast.