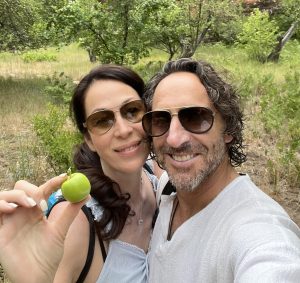 The story behind Grounding Wire, a new local nonprofit aimed at revolutionizing mental health, begins with a chance meeting which brought two people and their mutual desires together to make a meaningful impact in the world.

Bret and Frances Borshell were each on their own varied, yet parallel, career paths. In 2012, Bret moved to Estero from Jackson Hole, Wyoming. He has a sociology degree and a master’s in business administration (MBA), along with diverse experience in real estate, club and hotel management, martial arts instruction and mentoring. He is also an avid outdoorsman, is well-versed in transcendental meditation, and is a charcoal and oil portrait artist.

Frances, with a degree in psychology and an MBA of her own, was on her way to obtain a PhD in clinical psychology when she came to a fork in the road of her life.

“It’s always been a mission for me to make a difference,” she said. “I had the epiphany that I didn’t want to do one-on-one therapy. I wanted to really make an impact on millions of people.”

At the time leading up to meeting Bret, Frances had become a dedicated practitioner of transcendental meditation and even took a mastery program in gratitude.

“I wanted to experience my best self, free of anxiety, free of debilitating stress,” recalled Frances.

On the day of their first meeting, Bret, a single dad and gun safety advocate, was handing out gun locks at his children’s school fall festival. He was wearing a bright yellow parking attendant vest.

“And now here we are,” Frances said. “I found my best friend and the love of my life who’s on this journey with me, and I with him, to really make an impact and revolutionize mental health.”

“When I think about how we created Grounding Wire, it’s important to understand that it’s not something where we sat down and thought, ‘OK, what can we help with?’” Bret said. “We were each on that path — we were living it when we met — because we were both managing our mental health prior, and we were both working in areas in our personal lives and businesses where we were helping others.”

Frances is currently a top executive at a major eye specialist company in Southwest Florida. Bret has worked locally in real estate since 2020. With three kids at Bonita Springs High School, there’s never a dull moment, but the mission of Grounding Wire is so fundamental to their lives that they devote themselves to it every day.

The Gift of Getting Grounded

Grounding Wire works with schools, nonprofits, corporations and individuals of all ages. “Get Grounded” toolkits are currently in development, with clinical PhD psychologists providing content. The kits will include information for online and physical resources, along with daily affirmations and activities.

“It’s tools for all different people to know they’re not alone, to have access and support at any level,” Bret explained.

The need is great. Florida has one of the highest prevalence rates of mental illness in the United States. According to Mental Health America (MHA), Florida ranks No. 1 out of the 50 states in mental illness, yet is 49th for access to mental health care.

Frances and Bret want to be part of the solution.

“I’ve managed to thrive beyond my own anxiety, not with pills but really through grounding techniques,” Frances said. “We’re committed to those who would benefit from one-on-one therapy or crisis management or mental health trauma care — to get them access to the care they need — and if they can’t afford it, Grounding Wire will be able to provide mental health scholarships.”

Frances and Bret are actively working with Florida Gulf Coast University and other universities as far as California to distribute toolkits and are looking for more organizations to partner with to reach youth, veterans and the elderly.

“Bret and I have a mission to revolutionize mental health,” Frances said. “We’re focused on prevention and helping people not just cope but really be grounded in their daily living.”

To help spread the word and raise funds, they came up with the idea for a music festival. Kickin’ The Blues will be at Riverside Park in Bonita Springs on Saturday, Nov. 19.

“Music in itself is a big part of our toolkit because music is so important to so many people. You can listen to a favorite song years later and that emotion is back, right there,” Bret said.

His connections from his days in resort and country club management led to an impressive lineup for the inaugural Kickin’ the Blues festival benefitting Grounding Wire.

Other local artists will join these headliners at the festival, including soloist Terry Cooper and notable musician John Ford Coley.

The event will include food trucks with Chicago-style hot dogs and healthy alternatives, along with beer and wine. There will also be vendors, a meditation and yoga area, and booths with mental health resources.

This is just the beginning, say the Borshells. They plan to host music festivals throughout the state.

Their ultimate vision is to live in a society with zero suicides and zero mass shootings.

“We really believe there’s a greater purpose to (Grounding Wire). We’re a conduit,” said Bret. “Everyone has a story, and to me, it’s about the community. They need a spark for everyone to come together. We’re that spark.”

Tickets: $25 for general admission, $65 for VIP (includes separate entrance with valet parking, seating near the stage, and special beverage and food service)