His curriculum vitae is especially impressive for a kid from a working class family in northern Minnesota who was the first in his family to graduate from college. He studied economics and planned to become a city manager when he unexpectedly was offered a teaching position at the University of Wisconsin-Eau Claire.

“I taught six months and decided this is what I wanted to do with my life,” says Martin. “Fate has more to do with things than we want to acknowledge. I’ve been lucky a whole lot more than I’ve been good.”

Martin, 70, was easing into retirement as chancellor emeritus of Colorado State University when fate again jolted his path. He says he was “more than moderately stunned” when FGCU summoned him for an interview: “I’m no kid; I’ve been around a while.”

Martin first visited FGCU in 1998 when the university was just forming. At that time, Martin was vice president for Agriculture and National Resources at the University of Florida. He was invited to tour this new university in the middle of the swamp by interim president Gene Hemp. “I told Gene, ‘You’ll never pull this off; it’s an interesting experiment, but you can’t do it.’ I said, ‘When you have the going-out-of-business sale, let me know. I’ll come down and buy a few things.’”

Twenty years later, as Martin sits in the President’s Office at FGCU, he marvels.

“It’s more than you would think you could do in two decades,” says the man with 40 years of experience in higher education, now looking back upon FGCU’s story of success and charging forward to direct the university’s future. “It is beyond amazing.” 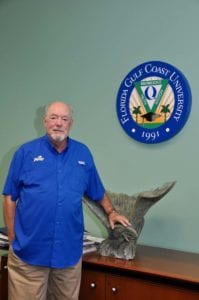 1. After you semi-retired from Colorado State (stepping down from the “top job” in 2015), why didn’t you simply enjoy retirement? What made you want to return to university administration?

Despite having carefully planned my transition or “glide path” to retirement, the closer I came to the actual date, the more I questioned what would get me up and going every morning. So, I told my family that if the right opportunity came along, my well-defined plan could change. I set three criteria: I wanted to go back to a campus, I wanted to go to a state I’d worked in before, and I wanted to believe I could make a difference.

2. What do you think the previous presidents at FGCU have done well?

Each of my predecessors have been the right leader at exactly the right time. Roy McTarnaghan had the vision and the persistency to make it happen from day one. Bill Merwin raised FGCU’s visibility and brought a unique energy to leadership. Wilson “Brad” Bradshaw employed a steady, consistent style in overseeing significant growth in enrollment and continuous expansion of and improvement by academic programs.

3. What is your vision for FGCU’s continued growth?

Hopefully we will continue to progress on the several fronts that have characterized FGCU’s first two decades. We will work hard to improve student outcomes, engage and serve the citizens of Southwest Florida, and build a few interdisciplinary research graduate programs that will garner international recognition. And we will, of course, seek to win several NCAA Championships while competing with integrity.

4. What are the biggest challenges facing Florida Gulf Coast University in the future?

We face two noteworthy current challenges: funding and space. We trust performance funding by the State will be distributed based on FGCU’s unique mission and contributions to the region and state. And we will need to add classroom, lab and office space (and build a recreation center) if we are to continue to progress.

5. What is your favorite sport and why?

I am a fan of all college sports. I have especially enjoyed women’s gymnastics at two universities that I have led. But on a personal level, I’ve been a lifelong baseball fan. While growing up, I enjoyed going to Minnesota Twins games with my father, and I tried hard to play baseball. My career, however, was adversely affected by a fundamental lack of talent.

6. What is something not widely known about you that the Estero community might be surprised to learn?

Along with three degrees in economics, I am proud to have earned a certificate in welding from Chippewa Technical College, Eau Claire, Wisconsin. And, no one enjoys being grandpa more than me.

7. What is the reason you get up and go to work every morning?

Knowing that FGCU transforms lives and, in turn, transforms the larger society gets me going every day. Being part of this power process is an honor, always interesting and really fun —except when a hurricane hits.