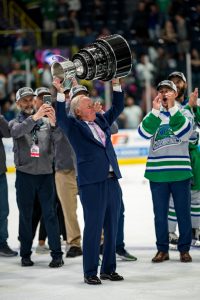 Craig Brush with the Kelly Cup

In January 1998, the first five members of the Florida Everblades administrative staff gathered at 17595 South Tamiami Trail in Alico Lakes Commons, where they laid the foundation on how Southwest Florida’s future hockey team would be run and where they would play.

They didn’t even have furniture when they started. Mark Miller, Dave Kessel, Bill MacKay, Jon Ronan and Craig Brush conducted their first office meeting sitting on the floor.

“That was how we started,” said Brush, the visionary behind the Everblades and the team’s president and general manager.

Brush is the only one of the original five who remains with the team after MacKay retired this past summer as vice president of merchandising.

“We had no office furniture, no phone system or number, no team name or coach or players, no bank account — only a dream and Craig’s belief in each of us,” recalled MacKay.

The Everblades began their first season in 1998 without a finished arena, playing on the road for six weeks — 13 games away from home. A live gator was brought onto the ice for the team’s first game at Everblades Arena on Nov. 19, 1998, and the Blades win was celebrated with fireworks.

In 25 years, the Florida Everblades have never had a losing season. The team has qualified for the postseason in every year but one (2014) and have won two-thirds of their games (66.79).

Head Coach Brad Ralph played against the Everblades in 2001 as a member of the Mississippi Sea Wolves.

“One of the things I remember was the explosion of the commercial and residential market around the arena,” he said. “I think the Everblades played a big part in that. They drew people to the Estero community with their storied success.”

Brush’s vision may have started the team, but his enduring dedication kept it going.

“You have to give Craig Brush a ton of props for his ability to have success year after year,” Ralph said. “This is the team’s fourth NHL affiliation, season tickets are up over the last 10 years, and in a league where so many teams fold or go dark, we’ve reinvented ourselves again and are moving forward with new ownership.” 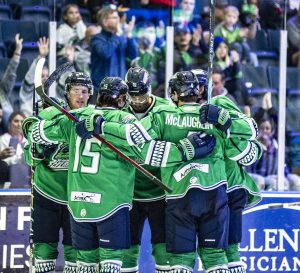 Brush became familiar with Southwest Florida in 1988 when he bought a home in Naples. It didn’t take him long to realize that the jokes about Southwest Florida being “God’s waiting room” weren’t that far off the mark. There was the water, the beach, golf, greyhound racing – and not much else.

After Brush took a buyout from his insurance agency in 1997, he turned to NHL owner Peter Karmanos to talk about starting a hockey franchise. Their sons played youth hockey together.

“We kept coming back to the ECHL and the Fort Myers marketplace,” Brush said. “This market met the ECHL’s demographics, and there were a lot of teams in the South, as well as Tallahassee and Jacksonville down the I-10 corridor. It looked like a good fit.”

In those early days of working at Alico Commons, Brush had a legal pad he filled with all the things he needed to accomplish. Besides getting an arena built with the proper permitting and engineering, he and his staff had to work with the ECHL, hire coaches, buy equipment, recruit players and find them places to live for preseason training camp.

“I still remember Craig giving me that first invoice,” MacKay said. “I asked, ‘How are we going to pay it?’ So we opened our first account with Sun Trust and started the business.”

With the goal to have a team playing in the 1998-99 season, “the only thing missing was the building,” Brush said.

The only thing. To accomplish that, they’d need to build a hockey arena in less than a year.

Brush later found out he was working with a hockey guy. McCarthy professed to be a “rink rat as a kid in New York City.” He played in an amateur league and was good enough to play varsity hockey at Massachusetts Institute of Technology (MIT).
Calling it a “complicated process,” McCarthy said permitting for the arena was extremely difficult.

“There were an enormous number of steps,” he recalled. “We had to break barriers. We knocked down the pins one at a time.”

County employees were enthusiastic about the project.

“Everyone kept looking at the goal and didn’t lose sight of that,” McCarthy said. “Very few negative things came up, and what problems there were, people were anxious to address them and get them solved.”

One of the factors that helped get the arena finished was having it designated as a hurricane shelter. Lee County paid to upgrade the roof.

“They wanted it as much as we did because they were short in terms of shelters needed and capacity,” Brush recalled. “Since it’s been built, we’ve needed to use it about half a dozen times for hurricanes.”

McCarthy could sense Brush’s confidence throughout the process.

“I always felt it would happen,” Brush said. “I knew it would happen. I don’t know what others speculated, but then they saw a building coming out of the ground. We felt, ‘Build it and they will come.’”

McCarthy joked that he “stretched rules as far as I could” to expedite the process. About six months into the project, he became a believer after taking a tour.

“You could see daylight at the end of the tunnel,” he said. “It was a very moving day.”

McCarthy picked out season tickets for himself and wife Char: “Section 108, row 9, seats 1 and 2.”

Along with the main arena, two recreational ice rinks were built. That has played a huge role in half-a-million people coming through Hertz Arena’s doors each year.

Recently retired from the Village of Estero, McCarthy calls the arena “the most satisfying project I’ve worked on.”

“It brought the benefits of lasting friendships with a number of people, not the least of which was Craig Brush. He deserves all the credit,” said McCarthy.

The years have gone by quickly for Brush, who was part of an unbeaten national championship hockey team with Cornell in 1970.

“There’s been far more attention given to me than I deserve,” he said. 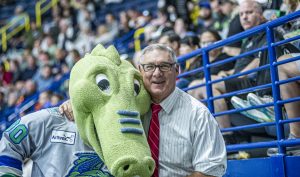 The Legend of the Everblades

The Florida Everblades have never had a losing record in any season and have qualified for the playoffs in all but one year. In addition to the ECHL team’s success, Junior Everblades youth hockey programs have competed nationally at various levels.

Earlier this summer, Estero’s Seamus Casey, a Junior Everblades graduate, was selected in the NHL Draft’s second round by the New Jersey Devils. Brush predicts Gavin Brindley, son of former Blades player Ryan Brindley, will go higher in the 2023 draft.

When choosing the team name, Brush felt “Southwest Florida” was too long, and he didn’t want to use Naples or Fort Myers (Estero wasn’t a recognized city back then).

The nickname “Everblades” came to Brush via special delivery. Literally.

One day, he received a free copy of National Geographic. It featured a story on the Florida Everglades.

Brush, who knew of a team called the Kentucky Thoroughblades, started thinking, “Everglades, Everblades.” He also had the perfect mascot in mind, an alligator — Swampee.

He had the Everblades skate logo designed by a Vancouver graphic artist he met at a wedding.

The 1998 home opener was met with torrential rains. With fans coming to the arena through one exit, there was a traffic jam for miles.

That night, McCarthy came through for the Blades again. The team wanted to have fireworks in the arena but forgot to apply for the pyrotechnic permit.

“The fire officials said, ‘You can’t do it,’” McCarthy recalled. “I was in the office at 4 in the afternoon on the day of the game when we discovered this. I said, ‘Let’s get this expedited.’”

The Blades won their first game. And they’ve kept on winning – 1,028 wins in the regular season and 133 in the postseason.

Now, as the Florida Everblades enter season No. 25, “It’s full speed ahead.”